Taiwan Will Use 'Chinese Taipei' in Another AIIB Bid, Official from Island Says 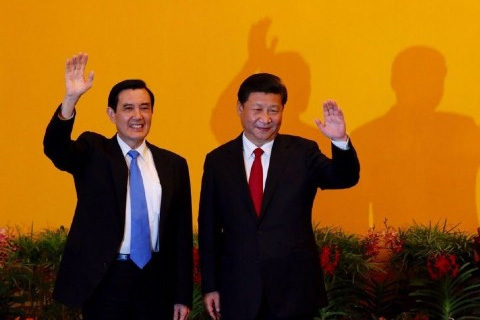 President Xi Jinping and Taiwanese President Ma Ying-jeou recently met in Singapore, the first time leaders of the two side of the Taiwan Strait have met since the end of a civil war in 1949.

The thaw in ties provided a new window of opportunity for joining the AIIB, Chang Sheng-ford, Taiwan's minister of finance, told the island's legislature on November 11.

The mainland rejected Taiwan's bid to become a founding member of the AIIB under the name "Chinese Taipei" in April. The Taiwan Affairs Office, the mainland's agency for handling cross-strait relations, said that the island could apply for membership later, but the two sides would need to talk about an "appropriate name."

Taiwanese officials later said "Chinese Taipei" is the government's bottom line for an acceptable name, and rejected using "Taipei, China." Taiwan uses the latter name at the Asian Development Bank, and Beijing wants it used in the AIIB.

Taiwan uses "Chinese Taipei" in the Asia-Pacific Economic Cooperation forum and the Olympics.

The mainland and Taiwan have been separated since 1949, when Chiang Kai-shek, the leader of the Kuomintang, or Nationalists, moved the government of the Republic of China to Taiwan after losing a war to Mao Zedong's communists, who established the People's Republic of China that year.

During the meeting of presidents in Singapore, Xi welcomed Taiwan to join the AIIB "in an appropriate way."

"Since Xi Jinping has welcomed Taiwan to join the AIIB and the mainland clearly understands Taiwan's 'bottom line,' Taiwan's application is likely to be accepted (this time)," Chang said.

Taiwan could submit a new application after the organization opens next year, he said.

Ma said after his meeting with Xi that the mainland's leader mentioned that as long as Taiwan's involvement in international organizations does not support the idea of "two Chinas" or "one China and one Taiwan" the two sides can "come up with appropriate solutions depending on the situation."

A poll of more than 1000 people in Taiwan by NOWnews, the island's largest online news provider, found that 55.7 percent of respondents thought involvement in the AIIB would help the economy.