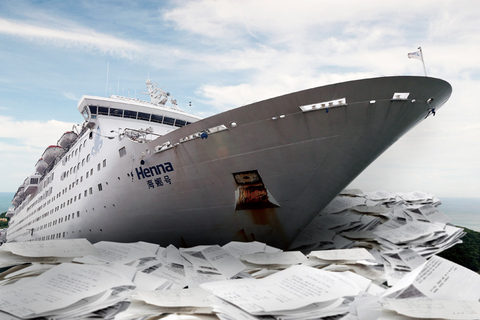 HNA Cruises, a subsidiary of Hainan Airlines Group (HNA Group), said in a statement on November 16 that the cruise ship named the Henna will stop running on November 17 after completing a five-day trip to the Japanese cities of Fukuoka and Nagasaki with more than 1,000 passengers.

Major travel agency websites, such as tuniu.com and ctrip.com, have stopped selling cruises on the ship.

In 2013, the Henna was briefly detained by South Korean authorities with more than 1,600 passengers and crew members on board, after Hong Kong-registered Shagang Shipping Co. sent a detention request, saying HNA Group and a subsidiary owed a huge amount in unpaid debts.

The Henna has been in the red for years due to competition from foreign companies like Carnival Cruise Lines, an employee of HNA Cruises said. "Although we have a lot of customers, the company faces fierce competition," he said.

The company does not plan to buy or rent more cruise ships and may shift its attention to business related to yachts and marinas, the employee said.

The country's first domestic luxury cruise ship has 740 passenger cabins and a maximum passenger capacity of nearly 2,000, the website of HNA Cruises says.

The ship used to be owned and operated by the world's largest cruise operator, Carnival, and its name then was the Pacific Sun. HNA Group purchased the ship in 2012 and created HNA Cruises to oversee its operations. The ship made its maiden voyage in 2013.

HNA Group's decision was related to the age of the vessel, a person close to the firm said. The Ministry of Transport said in 2012 that vessels over 30 years old cannot "enter and leave Chinese ports." The Henna was built in 1986.

However, a spokesperson for HNA Cruises said the age limit was not a factor in its decision, which was instead "based on needs related to the company's strategic transformation."

The spokesperson denied that the HNA Cruises will leave the industry.