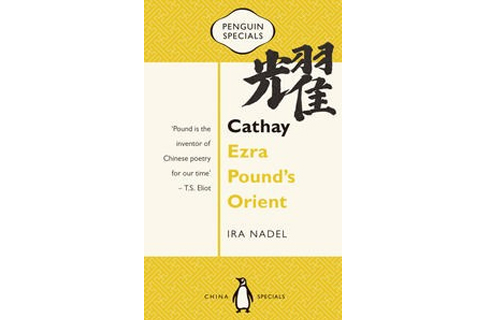 This year marks the hundredth anniversary of the first publication of Ezra Pound's slender volume of oriental poems, Cathay. While the collection does not have the fame of his epic lifelong work, Cantos, it ranks highly among modern fusion poetry that blends in two different literary traditions.

Pound never claimed to be fluent in Chinese, writes Ira Nadel in his introduction, although in the last decades of his life he did study Confucius's Analects with a dictionary by his side. He used Chinese characters in his work, but Pound's view from early on was that Chinese ideograms or characters, and the culture they represented, had primarily an aesthetic appeal.

The translations, which he based his own works on, came from the work of Ernest Fenollosa, an early Orientalist who mostly used Japanese renditions of classical Chinese works. Cathay is, therefore, a double mediation—a work based on another body of work which itself was derivative — rather than directly linked to the source material.

Pound was criticized for this remoteness once Cathay was published. But in the intervening hundred years, the consensus remains that he did manage to capture something of the spirit and deeper meaning of the Chinese texts.

Pound made a major contribution to the modern western concept of "the Orient", a place of otherness, with a different tempo and emotional register to European or American cultures. He described the dominant feelings of being lost and the sense of solitude within his imagined Orient. "The River Merchant's Wife: A Letter" is the most celebrated of this genre, with its tale of "two small people, without dislike or suspicion" who marry at 14, get separated at 16, with the wife waiting for her husband to one day return.

Exile and absence marks many of the other poems, reinforcing this sense that Chinese poetry is about delicate understatement and restraint, expressed through metaphors concerning the landscape, vegetation, or water.

Pound's imagination and work dealt with a larger "orient" rather than a specific place called China. The ways in which he treated this idea of what is oriental typifies other writers or thinkers from Europe or North America, whose cultures are distinct from that in Japan, China, or across East Asia.

Pound makes certain assumptions. In the Cantos, he described the whole dynastic history of China. Historians would now despair at his idea of such neat divisions between order and chaos. But when we remember that he is writing not so much about what China or the Orient as an actual place might be, but how western imagination configured it and responded to ideas about it this question of how accurate Pound's translations are becomes unimportant. What makes his poetry important not only in and for itself, but because its role in this history of western conceptualization of the Orient, and of China.

The book is also a reminder that Pound was a skilled lyricist. His later political adventures, which almost led to a conviction for treason during World War II for producing propaganda for the Fascist government of Italy, have tended to overshadow awareness of his immense technical skills. The Cathay poems show the intensity, the concreteness and the music that Pound at his best was able to create.

Cathay contains hybrid material—most of it related to Fenollosa's renditions of Japanese-Chinese texts, but he also put in his celebrated translation from the Old English, The Seafarer. There is nothing discordant about this. In fact, it stimulates thoughts on how similar the worlds from these two eras—ancient imperial China and the dark ages of Europe—might be. Both describe loss, vulnerabilities, and the creation of beliefs.

Pound is perhaps one of the very few creative figures that succeeded in bridging two very different cultural worlds. Cathay stands as a testament to that.

Kerry Brown is Professor of Chinese Studies and Director of the Lau China Institute at King's College, London. His latest book China's CEO: Xi Jinping will be out in April, 2016