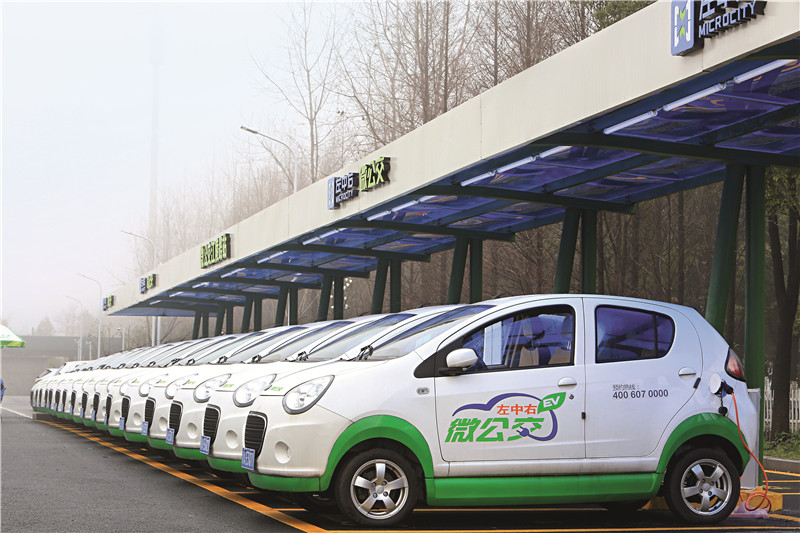 (Beijing) – When Zhan Jingjing joined an electric car rental company in 2013, her answer to quickly broadening the customer base was to let the economy of sharing work its magic.

Before joining the startup, she had run a project that rented e-cars to individuals. The model was simple: a person goes to a parking lot in front of the building that hosted Google's China headquarters in the northwest of Beijing, fills out paperwork, pays a deposit and has his driver's license photographed by a worker who oversees the firm's 16 e-cars there. After using the auto, he then returned it to the same spot.

The cost of renting one of those cars was low, but the business did not take off.

Zhan thought her next move should be automating the process for a more convenient customer experience and also, more importantly, using the Internet and data mining technologies to allow car-renting by the hour, anytime and anywhere customers want.

Compared with traditional cars, e-automobiles are better fitted for the job because they don't need refueling, said Sun Honggang, general manager of a company in Beijing that helps car-rental firms solve technical problems. Ideally, "an e-car is automatically recharged the moment a client returns it, so it can continue operating endlessly without human intervention," he said.

In November, the government of Sanya, in the southern island province of Hainan became the latest in a string of local governments that have said they will support hourly car-rental as a way to promote the use of electric vehicles.

Firms that claim to provide hourly e-car rental services number in the hundreds, but few are in it for the long haul because they either seem more interested in government subsidies than the business itself, or don't understand how it should work, said Fan Yongyue, deputy general manager of GreenGo, an electric car rental service owned by Beijing Hengyu New Energy Car Rental Co. The latter is partly owned by state-backed car manufacturer BAIC Group.

Through GreenGo, Hengyu owns one of the country's largest networks of hourly rented e-cars. Its goal upon establishment in June 2014 was to commit 5,000 electric cars to the rental network in two years. Now, Fan said, it has built nearly 80 stations in cities including Beijing and Hangzhou with almost 1,800 electric cars – one-third of them available for renting by the hour – and 50,000 registered customers. He said the goal is to double the number of stations next year.

GreenGo also leases e-cars to individuals and other rental companies on a long-term basis, and Fan said the firm uses revenue from this source to help cover the loss from renting cars by the hour.

Zhan said she was still working on developing a software that will allow people to rent more conveniently and maximize the use of every car.

Infrastructure is another big concern. She said the vehicles need to be modified in order to allow for more efficient use of resources. The cars should be small, for example, to fit into narrow parking spaces, and they should have an internal control module that decides when to recharge, she said. Unfortunately, however, cars that fully meet these standards have not been produced yet in China, she said.

Like many of its competitors backed by a car maker or an industrial company, GreenGo went about its business the traditional way: finding a spot to build a rental station and furnishing it with charging posts and then e-cars before opening for business.

But this model has not been particularly successful at satisfying customer demand, an analyst familiar with GreenGo said. He said his research shows only a small proportion of GreenGo's rental stations are where demand was the strongest.

Companies that have Internet backgrounds have more flexible approaches. UU Cars, an electric car rental mobile application that debuted in August, tests market demand with makeshift rental stations that have only three cars.

"If orders for each car exceeded the average by 30 percent, we will consider adding vehicles," Li Yu, the firm's founder and CEO, said. "If each car gets less than two orders each day, we will offer discounts and strengthen promotions."

If those steps didn't work, Li said, a rental station will be closed.

This strategy allowed UU Cars to respond quickly to customer demand, and Li said she used data from her previous venture at a peer-to-peer car rental firm to help her make decisions.

The advantage – or perhaps the drawback – of the strategy is that it does not allow for the time to build charging posts in rental stations. Instead, Li said they hire people to drive unrented cars to the nearest charging point at night, and return them to the stations before dawn.

A fully charged car runs for 160 to 200 kilometers on average. At the current stage, Li said this was the fastest and most cost-effective way to do business. She said the firm may build its own charging posts in the future.

UU Cars is also among the many rental firms that want a more symbiotic relationship with factories that make charging stations. Instead of purchasing products from them outright, some have proposed splitting the cost of installation with the factories and in return, allow them to share in the revenue from rental stations.

Beijing Dianzhuang Technology Co., which builds and rents charging posts, had many requests for cooperation from electric car rental companies since April, Xian Yue, the firm's CEO, said. There was no standard model to follow, so the final agreements the firm has signed with the renters varied from case to case, he said.

Traditional renters are better at handling both risks because "you need to show up at a real store to get the car and have it examined (before checking out)," an analyst familiar with the industry said.

The unattended process of renting e-cars by the hour, however, "may easily lead to situations where no one could be held responsible for damage," the analyst said.

Fan, from GreenGo, said the firm controls risk in several ways: only authorized members can rent cars, every GreenGo vehicle has a camera that records driving, and the footage could be used as evidence in disputes. The firm also has a unit that tracks down a client if he violates a contract.

UU Cars does not even ask clients for a security deposit. The firm's CEO, Li, said the risk of car theft did not bother her because an e-car can only go so far before it needs to be recharged and there is not a market for used electric cars, meaning a stolen one cannot be sold. "We've never had a car stolen and I've never heard about a theft in the industry," she said.

But that does not mean she took risk lightly. Li said the firm still has a unit for tracking down contract violators and it would charge people with poor credit records more to compensate for a greater risk.

A thorny issue that remains involves the law. A car could not appear on a street if it has been involved in too many traffic violations and the driver has not paid the fines. This would essentially hold e-car rental companies responsible for the mistake of clients, Zhan said. She has talked to the government about the problem but has not received any feedback.

Despite government subsidies, most e-car rental firms are not making a profit. At GreenGo, each car brought in about 2,000 yuan in revenue last month, almost 10 times the figure in January, but it was still not enough to cover costs, Fan said. He estimated the break-even point at 3,700 yuan.

Sun, from the Beijing company that supports e-car rental firms, said the government should take the lead in building infrastructure for the industry.

"Renting (electric cars) by-the-hour needs to be incorporated into a city's plan for the transport network, and the government should take charge in developing the infrastructure, such as charging posts and parking lots," he said.

"Companies on their own cannot solve these problems. They would build their little islands cut off from each other, so there will be no interconnection and the use of infrastructure will be inefficient," he said.