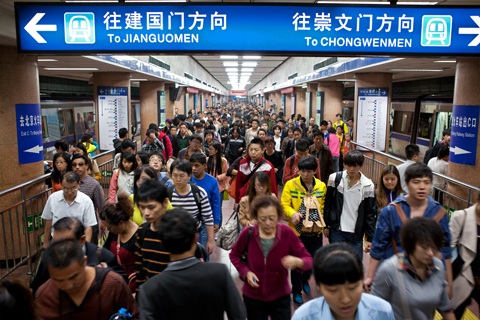 (Beijing) - Beijing plans to introduce a points system to allow the city's 8.2 million migrants to get permanent residency status, which would give them access to long denied public services, city officials said.

Nearly two out of five residents in the Chinese capital do not a local household registration, data from the Beijing Statistics Bureau show, and are denied access to schools and public healthcare facilities.

The scoring system, similar to the merit-based point scheme for immigrants in the United States, will allow migrants to get a permanent residency permit, known as a hukou, if they meet criteria outlined in a draft plan released on December 10 by municipal authorities.

Applicants should be under 45 years old, already hold a Beijing temporary residency permit and have paid social security premiums in the city for at least seven consecutive years, the draft plan said.

Applicants' employment status, duration of their rental license or ownership of a house in Beijing, tax and credit history will all be converted into points. For example, an applicant with a bachelor's degree can score 15 points and a doctoral degree gets 39 points.

If current plans are enforced without amendments, about one million migrants will be barred from applying due to the age-related restriction, a calculation by news portal Tencent show.

Individuals with also be rewarded for relocating out of the six most congested districts in the city.

The municipal government has not announced a clear cut-off mark to get a Beijing hukou. Authorities say they will set an annual benchmark score "in accordance with government population control goals every year."

The draft plan is open for public comments till December 30. The move comes as the city tries to reign in population numbers to combat worsening congestion and pollution.

In April, the party's 25-member Politburo, the top decision-making body, drew up a plan to integrate the Beijing and Tianjin municipal area with neighboring Hebei Province. This requires the capital to cap its population at 23 million people by 2020.