Staging Corruption: The Link between Chinese Television and Politics 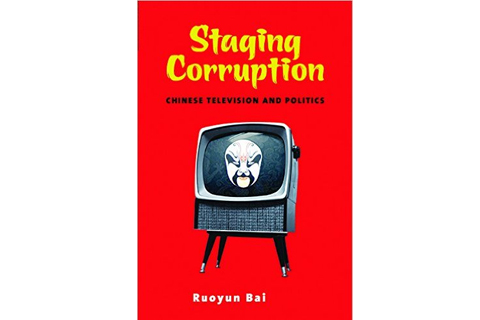 Staging Corruption goes backstage to explore the politics behind Chinese TV corruption dramas, providing both a critical analysis of their institutional, political and economic context, and sociological reflections on the 31 dramas it covers. The author's central claim is that a "disjunctive media order" has emerged in China as the product the partial commercialization of the media in post-Mao China. Here in the public media—as in many other areas of contemporary China—there is a stand-off between two logics, "neither of which dominates nor collapses into the other": the economic logic of commercial media and the political logic of continuing state control.

This dynamic disjuncture is visible in the way that corruption is narrated and corrupt officials are portrayed. The image has changed over time from the Manichaean "evil corrupt official" in 1995's first anti-corruption drama Heaven Above or Cangtian Zaishang, through to the disturbingly attractive 2009 counterpart of Snail House or Woju. Yet this is no story of more openness driven by the imperatives of the market.

On the contrary, the author claims "commercialization" has probably contributed to the entrenchment of state control as "media organizations and media managers developed a vested interest in sustaining the current political economic order by following the party line while pursuing financial gains." The result is constant negotiations and compromises between the commercially desirable and the politically acceptable.

Early on, Bai asserts that for the Party, these TV dramas have and continue to be more than just commodities even though, under Deng's liberalism, "control" changed from "having everything all my way" to "keeping bad things under control".

In the post-Mao era, consumer demand-driven growth has encouraged the privatization and decentralization of production, which transformed relationships within the industry. The emergence of powerful media outlet owners to contend with the regulator and censor, private producers, film-makers and scriptwriters led to a much more complex ecology of interests. Bai's analysis of the censorship mechanism—based on extensive insider information—reveals a highly complex and adaptable system, in which the level of control is dependent on whether the TV channel is regional or national with latter broadcasters like CCTV having tighter controls than local channels. Other factors include whether diffusion is terrestrial or satellite, the time of day with prime time being checked more strictly. Censorship levels like other facets of state control also vary over time with the waxing and waning of relaxation and re-centralization.

In this context, one key question involves the why and how of talking about portrayals of corruption on public TV in China. Corruption, a massive threat to the legitimacy of the regime, was not an obvious candidate for public entertainment. The author illustrates the dilemmas facing the regulators when acting out corruption. "How should corruption be narrated to make certain aspects of it visible and others invisible? How much of the backstage space and private lives of Party and state cadres can be moved onstage? Who may appear corruptible and who may not? Who has the right to talk authoritatively about and take action against corruption?"

Heaven above was the first time corruption became a theme for public entertainment, simultaneously satisfying an increasingly demanding public and serving as a social mobilizer for Jiang Zemin's anti-corruption campaign. The Party line was to showcase corruption as a failure of decadent individuals that has to be dealt with by strengthening party discipline. The role of the drama was to demonstrate the need of a strong Party in the face of corruption.

This official interpretation was soon undermined by commercialization. The "disjunctive media order" became problematic for the Party when provincial TV channels began producing more violent and gloomier scripts for prime time TV, exploiting the emerging social crises and growing alienation to draw in wider audiences. This content challenged the moral authority of the Party, which reacted with the 2002 "Clean up the Screen" campaign, and finally a ban on anti-corruption dramas in 2004. Displaying social evils on TV, which was seen as undermining the social and moral order and a threat to social stability and the Party's own image, moral authority and even capacity to solve the corruption problem, was finally no longer tolerable. Yet, while the 2004 ban put an end to anti-corruption dramas as a stand-alone genre, the issue lived on as an underlying theme in other TV dramas.

Bai looks in more depth at the "good official" narrative favoured by state propaganda in Heaven Above as an effective as a communication tool. Corrupt officials are morally decadent individuals who are policed by "good officials" (usually higher up in the Party hierarchy).

This "good official" narrative borrows from the Confucian mythological figure, Judge Bao, whose role in multiple folk stories was to bring down corrupt officials and fight injustice. This vision was not to last and soon alternative visions emerged, such as the good official as a "fallen angel", incapable of defeating more powerful dark forces, and hence the corrupt official as "anti/hero."

There was growing cynicism throughout the Chinese literary culture also prevalent in TV dramas, especially as a way to talk about corruption after the 2004 ban. Stories taking place in the realm of officialdom or Guanchang and workplace dramas or zhichang TV dramas, where stories revolve around power games amongst the powerful, have met with huge popular success. The enormous success of Empresses in the Palace (Zhen Huan Chuan) launched in 2011 confirms its enduring popularity. Like the jailed Nobel laureate Liu Xiaobo, Bai worries that these attempts to normalize corruption has become an inherent fact of political life in China.

The finale of this evolution in corruption discourses sees the metamorphosis of the corrupt official into a role model. The 2009 TV drama Snail House had as its main anti-hero, Song Siming, a corrupt Shanghai local official, whose story is directly inspired by the real-life case of Shanghai Communist Party Secretary Chen Liang-Yu.

Through scrutinizing thousands of online reviews, Bai shows that the pervasive public cynical view of Chinese politics lends a fascination and acceptance of Song Siming's behavior. He is the incarnation of a middle-class dream, capable, smart, successful, and responsible. "If you were in his position, you'll do exactly the same" appears on popular web chats. This section of the book engages with a broader critical reflection on middle-class urban aspirations and anxieties, how they are conditioned by the corrupt political environment and at the same time shape the way people perceive of corruption.

The author concludes: "As corruption dramas evolve in an environment defined by political censorship, commercial media and the ideological aggression of neoliberalism, they shift to cynical entertainment. Not only do those dramas rationalize corruption but they are increasingly viewed as all-in-one courses providing useful instructions for young people on how to infuse comedy in to one's interpersonal relations and cultivate networks with the powerful in order to achieve one's ambitions."

In this, Bai captures an important dimension of China's current social atmosphere, one shedding a light on Chinese politics different from the bipolar "imminent collapse" versus "China dream". Political propaganda and commercially-driven cultural production are not incompatible; counter-intuitively, they can be mutually reinforcing. The corrupt are always an official, never a businessman. The latter appear exempt of public and social responsibility.

Bai's main criticism of the two dominant discourses on corruption in Chinese TV dramas (melodrama and cynicism) is thus precisely that they fail to question the structural linkage between corruption, the state and capitalism, and, consequently, do not allow society to formulate adequate solutions. Cynicism is responsible for "displacing corruption from the concrete historical conditions of post-Mao China and relocating it to an ahistorical imagination of an isolated, immutable and made essential in Chinese political culture."

The only solutions made available are "either the moral indictment of corrupt individual officials or a damning generalization of Chinese bureaucracy, and by extension Chinese culture, as decaying."

Yet Bai concedes that rampant cynicism does not mean that moral condemnation of corruption is no longer relevant in contemporary China. This is shown by the public support for Xi Jinping's sustained anti-corruption campaign in 2013. Hence, people like to refer to Xi's anti-corruption tsar Wang Qishan's "dark face", a characteristic of Judge Bao.

The book, as per the title, focuses on TV. To the author's own acknowledgement, it stops from analyzing the role of the Internet. One is left wondering what becomes of the censorship when large amounts of TV series are made available free online on media platforms such as youku, Aiqiyi, Toudou, Letv, Baidu, etc. The level of censorship may be different there from prime time TV. For instance, Snail House, which incurred serious criticism by the Chinese TV regulator after its first run on Shanghai Dragon TV, and never got permission for any re-run, is freely available to watch online. But, the explanation for this remains beyond the scope of the book.

Besides, as the author herself point out in the conclusion, the Internet is perhaps today's best incarnation of Judge Bao, a way to monitor and talk about corruption to bring the guilty to book and redress injustice. Now social media in China, from Weibo, QQ and renren to Wechat, dwarfs the role of television for the middle class urban population who were the target audience for these dramas. How the dynamics of their Relationship with the censor will unfold, influencing how corruption is talked about and what images of corruption are created, is to come.