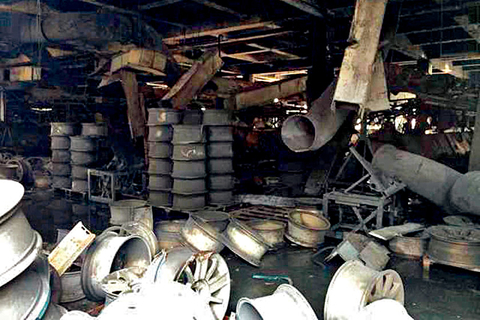 (Kunshan) – Dozens of auto parts workers who were injured in a huge explosion at their factory last year and their relatives have clashed with riot police during a protest over their compensation.

The workers demonstrating on December 14 were among those injured by a blast at an auto parts factory in Kunshan, in the eastern province of Jiangsu, on August 2 last year. The explosion at the Zhongrong Metal Products Co. blamed on a buildup of metallic dust in the air killed 146 workers, the government later said.

Dozens of factory workers, many of them from outside the manufacturing city of Kunshan, and their relatives were protesting at a city government building about the way their injury payouts are being handled.

More than a dozen of the workers' relatives were detained amid the clash with police, witnesses said, and one said a few of their relatives were hurt in the incident.

The protest was linked to a group of nearly 70 workers who suffered severe injuries, such as burns to up to 90 percent of their bodies and deformed limbs. Many of the workers still require hospital treatment in Kunshan and have to be cared for by their relatives.

One worker told Caixin that the government recently told the workers they need to undergo assessments of their injuries to determine how much compensation they will receive. Workers who suffered lighter injuries will receive a one-off payout, while those who were critically hurt can stay in the hospital and get 90 percent of their salaries.

The worker said he and others wanted officials to clarify the levels of compensation for lighter injuries and how future medical costs will be covered before they will agree to the assessments.

Relatives of injured workers from out of town say they get 300 yuan a day for food and accommodation while they are in Kunshan, but also want their transportation costs covered.

The workers and their relatives said they went to lower government agencies to get answers on the payout plan before the protest at the city government building, but no one would talk to them.

Caixin's calls to the city government were not answered.

The blast in Kunshan highlights China's poor track record regarding safety in the workplace. Two days after the explosion, a team of investigators sent by the central government said the company neglected many safety rules.

In November 2013, the port city of Qingdao was shaken and 62 people were killed when a pipeline belonging to China Petroleum & Chemical Corp. (Sinopec) leaked into the sewage system under a street and the fumes were ignited, causing an explosion. The blast occurred near where a Sinopec crew was working on fixing the pipeline leak.

Then on August 12 this year the country was shocked by two massive explosions at a chemicals warehouse facility in the port city of Tianjin. The blasts killed 145 people, including 88 firefighters; injured hundreds of people; leveled the warehouse area; damaged thousands of homes whose owners were told the area was safe; and even destroyed a nearby light rail station.