Landfill in Shenzhen Disaster Was Cited as Risk to Industrial Park 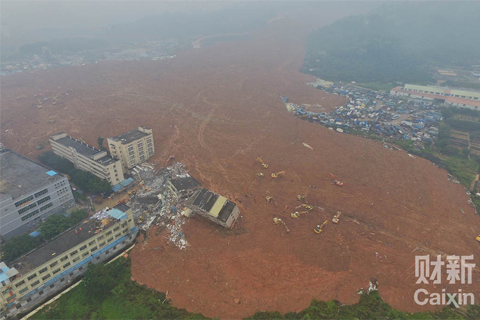 (Shenzhen) – A landfill in Shenzhen that environmental inspectors had warned could pose a threat to an industrial park where people lived and worked collapsed on December 20, covering the area with a river of mud that has left at least 91 missing.

Rescue workers were detecting signs of life from beneath the mud on December 21 and a fleet of excavators was trying to dig down to some of the 33 buried buildings to reach people who were trapped, said Yang Shengjun, director of the city's construction bureau.

The mud that flowed out of the landfill about a kilometer away was 10 meters deep in some areas, city officials said. It was unclear what caused the facility to overflow.

Shenzhen city officials initially called the incident "a landslide," which it would indicate the area was hit by a natural disaster. However, later on December 20 officials from the Ministry of Land and Resources said a "construction waste disposal site" had collapsed. Ministry officials did not use the word landslide.

Photos of the area that Caixin took using a drone equipped with a camera show a broad river of mud that flowed out of a hilly area, covering roads and buildings. The mud flow, which started at 11:40 a.m. on December 20, covered 14 factory buildings, two office buildings, three dorm buildings and other structures in the industrial park area in the Guangming New District in northwestern Shenzhen.

An environmental impact assessment report that the builder and operator of the landfill, Shenzhen Luwei Property Management Co. Ltd., published in January indicated the facility could pose a risk to nearby industrial parks.

"If the landfill collapsed, the major impact would be on Liuxi industrial park and a concrete company," said the report.

Liuxi is one of the three industrial parks that were damaged. The report appeared on the website of the Guangming New District government, but it has since been removed.

The report indicated that the landfill in the hilly area would use an abandoned rock quarry to hold dirt taken from building projects all over Shenzhen. It added that the facility was placed on "an existing depression on the top of the hill."

Luwei Property Management was established in 2001, its website shows. The company says its businesses include property management, parking lots and apartment cleaning, but it does not mention operating construction projects.

The mud flow triggered an explosion on a nearby section of a pipeline that transports natural gas from the western China to Hong Kong, the official Xinhua News Agency reported.