Once Called a Troublemaker on Climate Issues, China Credited with New Openness 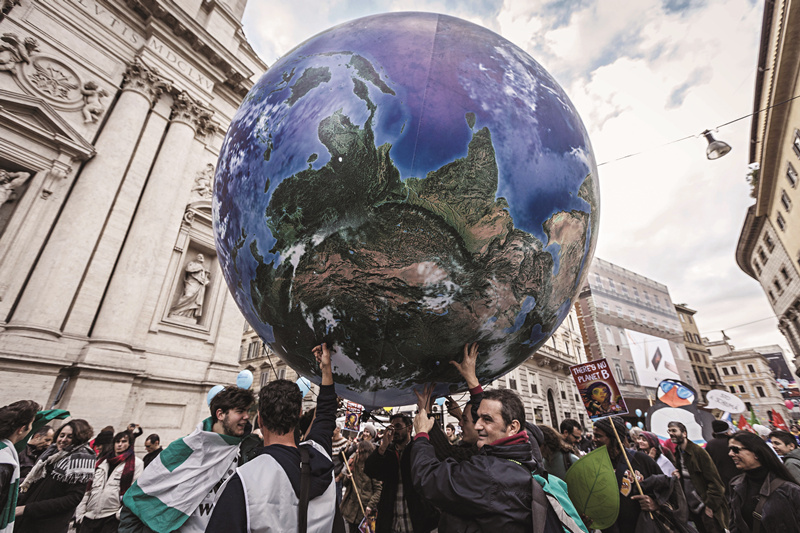 (Beijing and Paris) – China was labeled a "troublemaker" by many other nations at the Copenhagen round of UN climate talk in 2009 when its representatives refused to subject the country's greenhouse gas emission figures to a transparency check known as "measurement, reporting and verification."

Six years later, after China was found to be underestimating its emissions for years, Beijing moved quickly to confirm the report, saying its conclusions were based on revised figures it voluntarily disclosed.

The widely read report has once again highlighted China's handling of its carbon dioxide emissions data.

"The government has chosen transparency over covering up in dealing with figures that they knew could result in an international backlash," he said.

Beijing's handling of the country greenhouse emissions data is crucial because as the world's biggest emitter it contributes to about 30 percent of the world's total carbon output. Its openness can also help boost transparency that is key to broader efforts to prevent global warming from rising to catastrophic levels.

In a front-page story on November 3, the New York Times reported that China has been burning up to 17 percent more coal per year than the government previously disclosed. Citing data from the Chinese government, the report said that the country's carbon dioxide emissions could have been underestimated by 1 billion tons a year from 2000 to 2013. The annual increase is more than Germany emits from fossil fuels in a year, the report said.

In response to the report, China's special envoy on climate change matters, Xie Zhenhua, told reporters at a conference in Paris in December that the revelation will have no impact on the country's commitment to fighting global warming. He said the government drew up its nationally determined contributions (NDC), a country-specific plan for emissions reduction submitted to the UN Inter-governmental Panel on Climate Change (IPCC), in accordance with the revised figures.

China and 195 other countries reached a landmark climate agreement in the French capital on December 12 that set out an emissions mitigation goal for beyond 2020. The deal, largely a collection of NDCs from each country, is subject to the approval by the national government or legislature of each country next year.

It calls on the international community to limit the increase in global average temperatures to 2 degrees Celsius from pre-industrial levels. At the insistence of some island countries, the countries also agree to try to hold the increase to 1.5 degrees.

Apart from the cap on temperature increases, some industrialized countries, such as the United States and countries in the European Union, have set out targets for absolute emission reductions. On the other hand, many developing countries signed on to the agreement by promising to reduce the carbon intensity of their economies or carbon dioxide emission per unit of gross domestic product.

China unveiled its NDC at the end of June, promising to cap carbon dioxide emissions by around 2030, and its use of non-fossil-fuel energy is to account for about one-fifth of its overall energy consumption by then. It said that it will cut the country's carbon intensity from the 2005 level by 60 to 65 percent by 2030.

To meet these targets, Xie told a news conference on December 23 that China will spend 41 trillion yuan in the next 15 years. He said the country faces a daunting task in its switch to non-fossil-fuel energy, which stands only at 12 percent of its overall energy use.

China still refuses to abide by the "measurement, reporting and verification" principle and it has given the IPCC only two national greenhouse gas inventory reports, one in 1994 and the one in 2005.

The Paris pact does not require nations to adhere to the principle, but Beijing will have to report on carbon emissions to the UN every two years. It will also be bound to make efforts to bring its statistical practices in line with international standards.

The National Bureau of Statistics (NBS) said that China revised its energy consumption figures in accordance with data from the 2013 national economic census that had sampled many more manufacturers than in the past. These statistics are detailed in an economic and social development gazette published in February this year and the China Energy Statistical Year Book for 2014.

An examination of those publications by Caixin found that the country's overall coal consumption from 2000 to 2012 was revised upward by 7.5 percent, and in 2012 alone, China burned 590 million tons, or 17 percent, more coal than previously revealed.

"The revised figures better reflect China's actual energy use," the NBS said in a written reply to a Caixin inquiry. The government now has more reliable statistics to draw up the five-year plan for the 2016-20 period and energy development plans in the medium and long terms, the bureau said.

Zhou Dadi, the vice secretary general of the non-governmental group China Energy Research Society, said that the upward revision was made possible by the 2013 national economic census, which sampled many more small coal mines than in the past. Small mines make the majority of collieries in China, he said.

Dan Dudek, vice president for Asia of the Environmental Defense Fund, a non-governmental group in New York that advocates sustainable development, wrote in a recent article that the big revision has added greater urgency and difficulty to tackling global warming.