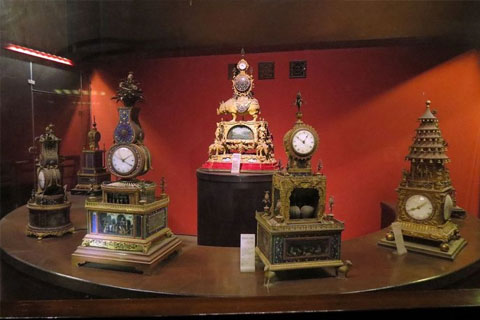 Among the first etiquette rules taught to a student of Chinese language and culture is one I have always found curious: never give a clock as a gift. To gift a clock or a watch, we are warned, is to visit bad luck upon the recipient. As often the case in China, this superstition is rooted in language: the words for giving a clock (song zhong) sound like those for arranging a funeral or a burial.

But gifting a clock has not always been considered bad luck in China. On the contrary, clocks, watches, and elaborate timepieces were among the most valued gifts an emperor or official could receive during the Ming and Qing dynasties. European-made clocks and timekeeping technology played a vital role in the cultural exchange between China and Europe from the 17th to the 19th centuries. Many of them are still on display in the Hall of Clocks and Watches at the Forbidden City, also known as Beijing's Palace Museum.

It all started in the late 1500s when Jesuit priests were looking for a way to enter China to proselytize their faith. Italian priest Alessandro Valignano, who headed the Jesuit mission in the Far East, was a great admirer of China and insisted that the only way to approach the nation was through a position of respect. He thus recruited Jesuits who were willing and able to immerse themselves in China's language, culture, history and philosophy. Valignano likewise decided that the aspect of European culture that would most interest China's elite was science, since he perceived scientific understanding in China to be much less developed than in Europe. He thus adopted a doctrine known as propagation fidei per scientias, or propagating the faith through science.

Mechanical clocks fit into this doctrine because there were none in China at this time. Much of the technology needed to make mechanical clocks had existed in the Song Dynasty, but it had fallen into disuse. In the late Ming, there were few instruments for measuring time and those that existed were large, cumbersome, and were mostly powered by either water or fire. "A few other instruments are made with wheels rotated by sand as if by water," the Jesuit Nicolas Trigault wrote in the early 1600s, "but all are mere shadows of our mechanisms and generally faulty in time keeping." European mechanical clocks, which used weights regulated by an escapement system, were therefore perceived as remarkable scientific instruments. Because they were often lavishly ornamented with moving figures that rang the hours, these self-chiming bells (zimingzhong), as they eventually became known, were also works of art.

Valignano, therefore, decided that several clocks should be included in the gifts that the Jesuits hoped to present to the emperor, if ever the missionaries were allowed to leave Macau and journey to Beijing. Rome sent a magnificent timepiece to support this plan, and two Chinese officials, in Guangdong Province and Guangxi region in the south, were so intrigued when they heard about it that they indeed let the foreign priests into their areas, writes Joseph Needham in his book Heavenly Clockwork: The Great Astronomical Clocks of Medieval China. One of the men allowed to enter China was the Italian priest Matteo Ricci (Li Madou), who made it to Nanjing in the mid-1590s, after briefly staying in southern China. There, he submitted a petition to the emperor requesting permission to present the gifts. While waiting for an answer, Ricci opened a small museum to display his mechanical clocks.

Word of the magnificent time-keeping instruments soon spread far and wide and a powerful eunuch named Ma Tang came to inspect them and offered Ricci and his companions a ride to Beijing on his luxurious barge. However, when they reached Tianjin, the eunuch imprisoned the Jesuits in a temple and stole the clocks and other precious items. Months passed and Ricci began to fear his last hope was "divine assistance" – until a message arrived from the palace. As it was later told to Ricci, and recorded by a colleague, one day, the Wan Li Emperor asked, "Where is that clock, I say, where is that clock that rings of itself, the one the foreigners were bringing to me, as they said, in their petition?"

Ma Tang immediately returned the stolen loot and Ricci was escorted to Beijing. Since the rivers were frozen, eight horses and 30 porters were provided and an official from the High Court of Ceremonies was sent to ensure their safety en route. He arrived on January 24, 1601, and the clocks and other gifts were sent to the emperor the next day. Word leaked that Wan Li was thrilled. Just a few days later the Jesuits were invited to report to the palace because the larger of the two clocks that were gifted had stopped working and the emperor wanted it fixed. Ricci hurried to the Forbidden City, where he moved in with four eunuchs from the College of Mathematicians and spent several days teaching the "dull and intellectually sluggish beings," according to Ricci, how to regulate the complex inner workings of mechanical clocks. The eunuchs' slowness proved to be a blessing in disguise because the elusive Wan Li, who did not meet anyone outside his inner circle, sent messengers with a stream of questions about the clocks, Europe and Christianity. Ricci answered them all, and passed back word that the Jesuits' only request was to be allowed to live and die in Beijing – which they were granted.

The clock-regulating crash course paved the way for a tradition of horological collaboration between the Jesuits and the Imperial Palace that would last almost two centuries. The Jesuits continued to procure more exquisite timepieces from Europe as gifts for the emperor. One obtained by Father Trigault in Cologne, Bavaria, told the story of Christ's birth each time the twelfth hour was sounded – shepherds appeared, the Magi came out and bowed to the Virgin Mary, God looked down from Heaven, angels descended, and an instrument played a lullaby. The missionaries also continued to provide instruction in how clocks worked. In 1627, a priest named Johannes Schreck – a former colleague of Galileo and friend of Johannes Kepler – co-authored "Record of the diagrams and explanations of wonderful machines of the far West" with the scholar Wang Zheng. Their book included an explanation of how mechanical clocks worked.

Eventually, the Jesuits also began to recruit clock-makers into their order and the China mission. This policy proved fruitful, and toward the end of the century, Emperor Kangxi established clock-making workshops that were supervised by the imperial household administration and modeled after Louis XIV's Academie Royale des Sciences, which the emperor had learned about from the Jesuits. An Office of Clock Manufacture was established in 1723, with two workshops in the Forbidden City and one at Yuanmingyuan, the Old Summer Palace destroyed in 1806. One of the clock-makers, Valentin Chalier, made a timepiece for Emperor Qianlong that combined traditional Western and Chinese methods of timekeeping, striking both the hours and the night watches, in accordance with the Chinese tradition. This was complicated because night-watches began two hours after sunset and ended two hours before dawn, with each night divided into five equal watches that changed in length depending on the time of year.

Chalier explained in a letter to Rome that the emperor was delighted with the clock. "When it was finished (the emperor) invited the princes and noblemen to come and look at it, explaining its intricate internal dynamics as if it was something of his own invention," Chalier wrote. "They complimented him highly, attributing to him all the execution of it and the cream of the joke was that I had to speak in the same strain as all the rest of them." Chalier further explained, "As for clocks, the imperial palace is stuffed with them. Watches, carillons, repeaters, automatic organs, mechanized globes of every conceivable system – there must be more than 4,000 from the best masters of Paris and London, many of which I have held in my hands for repairs or cleaning. I must know as much of the theory now as any clockmaker in Europe, for I am sure few have had as much experience. If only I had more practice in my youth!"

Jesuit clockmakers continued to work in the palace until near the end of the 19th century and a trade in European clocks and other mechanical devices – known as the "sing-song trade" – grew up outside the palace. But the importance of foreign clockmakers and imported timepieces faded as Chinese clockmakers became more skilled. According to Catherine Pagani, author of Eastern Magnificence & European Ingenuity, after about 1815, elaborate Chinese clocks could be purchased for half the price of those made in Europe. In the 20th century, the gifting of clocks became taboo, but at one point in history these exquisite machines brought China and the West closer together.

Sheila Melvin is a newspaper columnist and her latest book, Beethoven in China: How the Great Composer Became an Icon in the People's Republic, co-authored with Jindong Cai, was published by Penguin Books