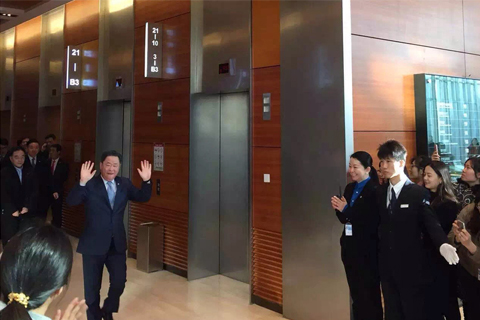 (Beijing) – Investors are closely watching a leadership reshuffle going on at the country's largest state-owned food and agricultural conglomerate, fearing it may derail the company's global expansion plans.

Zhao Shuanglian, the former chairman of the state-backed grain stockpiling agency, China Grain Reserves Corp. (Sinograin), has been appointed to the top job at COFCO.

Although SASAC says its decision to reshuffle SOE executives is routine, the departure of Ning has fueled concerns about the food giant's future course. During Ning's 11-year tenure, which formally ended on January 5, COFCO went on a shopping spree, acquiring over 50 overseas assets. By the end of 2014, these foreign holdings accounted for half of the company's profits, financial reports show.

On December 22, days before the leadership change, COFCO International Ltd., a subsidiary of COFCO, spent US$ 750 million to buy the rest of Noble Agri Ltd., the agricultural trading subsidiary of Hong Kong-based Noble Group. The company had already bought a 51 percent stake in Noble Agri in April 2014. It grabbed a similar stake in grain trader Nidera BV, based in the Netherlands, for US$ 1.2 billion in February 2014.

In just a few years, COFCO has spent several billion dollars buying up Australian cane fields, French vineyards and soybean pastures in Brazil, helping it become one of the world's largest food companies.

Some in the industry applauded Ning's ambitions, which turned COFCO into the third largest agribusiness company in the world in terms of assets. However, critics said the aggressive expansion has eroded profits and created management problems.

Ning brushed off this criticism in an interview with Caixin in 2013, saying: "It takes time for a company to expand its scope." During his tenure, the agricultural heavyweight has also developed businesses in real estate and made inroads into the online food retailing business with the website womai.com.

The food giant still needs to integrate its overseas acquisitions with its domestic business, a source from an investment firm who wished to remain anonymous said. For example, plans to integrate Dutch grain trader Nidera with COFCO and Noble Agri have been halted as of December 23, for unspecified reasons, Bloomberg said.

The conglomerate needs to build a team to manage its overseas businesses, an agriculture industry expert who asked not to be named said. And the leadership change at this critical point may have hurt the company's expansion plans and efforts to consolidate its huge amount of assets, the investment company source said

The company has already built up an international acquisition platform and its strategy is "irreversible," said Zhang Wendong, managing director of Hopu Investment Management Co., a private equity firm that had worked with COFCO on several major deals including its acquisition of Nobel Agri.

People close to Ning called him an "exceptional" executive among top leaders at state-owned enterprises for his ability to remake a company and adopt a Western style of management. He tapped into private investors such as Hopu, Singapore-based Temasek Holdings Private Ltd. and Standard Chartered Private Equity Ltd. to fund the company's international expansion. Ning also hired foreign managers, a rare move for large SOEs.

The company's willingness to open up to foreign investors and professional managers helped push internal reform, a market analyst said, and paved the way for COFCO to list some of its assets. It has eight listed subsidiaries trading in the Shanghai, Shenzhen and Hong Kong bourses.

Some attribute these bold steps to Ning's unusual background. Many SOE chiefs lack university degrees, instead learning the ropes on the job. Ning, however, holds a bachelor's degree in economics from Shandong University in the eastern city of Jinan and a master's in business administration from the University of Pittsburgh in the U.S. state of Pennsylvania. Before joining COFCO in 2004 as chairman, he spent more than 10 years as head of the state-owned China Resources (Holdings) Co., transforming it from a foreign trading company to an investment conglomerate.

Ning's successor, 58-year-old Zhao, had a four-year stint as head of Sinograin. Before that, he served as a government official in the northern region of Inner Mongolia in charge of industrial development.

Zhao faces a tough challenge in his new job. At the end of 2014, COFCO's total assets had ballooned to US$ 71.9 billion from US$ 43 billion a year earlier. One-fifth of the company's assets are based overseas and this includes subsidiaries in more than 60 countries and regions.

Ning's breathless international push has come under fire because the company is seeing profits slip amid an economic slowdown, an environment of rising operation costs and exchange rate fluctuations. Earnings have fallen since the company recorded a profit of 10.2 billion yuan in 2011. In 2014, its profits were down to 3.1 billion yuan, the company's financial report showed.

"It is impossible for China to solely rely on itself to meet the food demand of its population," the source from an investment company said, citing high land prices that have weakened domestic competitiveness in agriculture.

COFCO President Yu Xubo said that the deal with Nidera would provide COFCO direct access to grain and oilseed from growers in South America and Central Europe.

But the company still needs to get a foothold in North America, the world's largest agriculture exporting region, a source close to the company said. Its access to other resource-rich areas like the Black Sea region and major food production countries in the Pacific Rim are also limited, the source said.