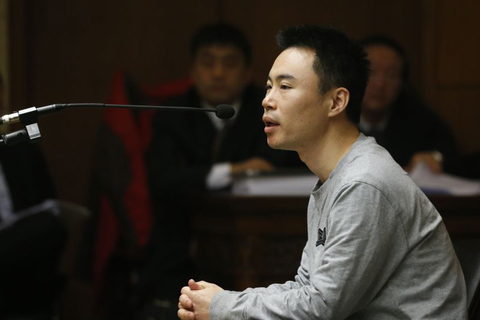 Wang Xin, CEO of Shenzhen Qvod Technology, speaks at his trial in a Beijing court on January 7

(Beijing) – Four executives of a company operating one of China's most popular video-sharing websites have gone on trial in the capital for allegedly profiting from pornography – a sign the government is still working to try to clean up the Internet.

Shenzhen QVOD, which opened in 2007 in the southern province of Guangdong, developed a video player that allowed paying users to access pornographic and pirated video content from other hosts, prosecutors said.

"The defendants did little to stop the problem even after they learned that people could use their software to search, download and upload pornographic materials, resulting in online circulation of harmful content in great quantity," prosecutors said.

If convicted, the four could be imprisoned for life.

Authorities in the country have worked hard to remove content they deem harmful and politically sensitive from the Internet in recent years. Spot checks for unlicensed and pornographic content have been carried out on websites, search engines, mobile application stores and firms offering video streaming services.

Shenzhen QVOD says it has 300 million users and it has derived much of its profits from membership fees. It was fined 260 million yuan by regulators in Shenzhen in May 2014 for linking users to pornographic material and copyright infringement. Authorities did not say how they determined the amount of that fine.

Shortly afterward, the company's Internet business license was revoked by the National Office against Pornographic and Illegal Publications.

Prosecutors said police in Beijing retrieved nearly 30,000 video files from four server computers that Shenzhen QVOD rented from a Beijing technology company in November 2013 and more than 70 percent of them were pornographic.

The executives were arrested by Beijing police in August 2014.

Wang, Shenzhen QVOD's founder and CEO, and the three executives pleaded not guilty. Wang said in court that the company is not responsible for the content streamed via its video player.

He added that the company installed a keyword filter system based on a database provided by the Internet unit of Shenzhen police to block over 1,000 websites offering harmful material to its video player, but it is impossible to screen out all problematic content.

The court did not make a ruling in the case.