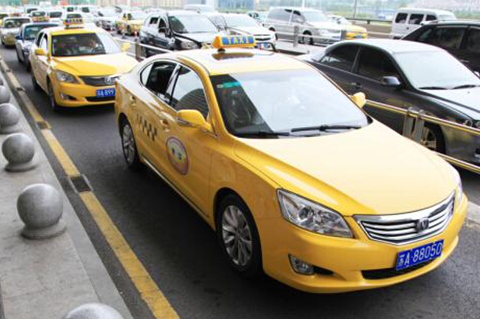 (Beijing) – Thousands of taxi drivers in the eastern city of Nanjing are striking to demand that fees they have to pay their companies be cut.

The strike started on January 8 when a small group of drivers walked off the job. By the evening of January 10, about 13,000 drivers, or about two-thirds of those in Nanjing, had joined the labor action, the drivers said.

The strike was still going on as of January 12, and several residents of Nanjing said that it had become very difficult to hail a taxi.

The city's transport authorities have not responded to inquiries from Caixin over how they will deal with the problem.

One driver said that the goal of the strike is to pressure government-backed taxi companies to cut the license fees drivers are charged each month. Drivers need to pay their employers more than 3,700 yuan in licensing fees each month, and this charge, on top of expenses for gas and repairs, was becoming onerous, he said.

Taxi drivers are only making 4,000 yuan a month even if they work over 10 hours a day, seven days a week, he said.

The driver also said the strikers want the government to crack down on private drivers offering rides via car-hire apps backed by big Internet companies like Tencent Holdings Ltd. and Alibaba Group Holding Ltd. because they are eating into taxi drivers' earnings.

Services such as Didi-Kuaidi that link private drivers to passengers are gaining in popularity among young people in large cities, but have angered drivers who complain they are losing money.

Such strikes have broken out in several cities around China, including in Shenyang, in the northeast, and Shenzhen, in the south, since early last year. Officials in Shenzhen recently ended a walkout by offering a monthly subsidy.

Thousands of taxi drivers also went on a three-day strike in Nanjing in January last year over the car-hailing apps. The strike ended when taxi companies agreed to waive a small monthly fee drivers had to pay.