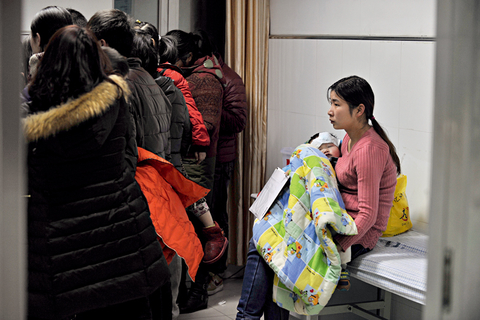 Parents cram into a pedtrician's consultation room, while waiting for their turn

(Beijing) – An acute shortage of doctors to treat children is taking a toll on public health services and the recent policy shift to allow families to have two children will only make matters worse, experts say.

The country has a shortfall of at least 200,000 pediatricians, the National Health and Family Planning Commission said. Nearly half of all registered pediatricians left their positions between 2005 and 2011 due to poor pay, long working hours and dim career prospects, its data show.

"About one-third of the doctors have left our hospital in the past two years and gone to work in pharmaceutical companies or private hospitals that offer better pay," said Liu Tingliang, a doctor at Shanghai Children's Medical Center, which is linked to Shanghai Jiao Tong University.

In early January, public health authorities in Shanghai enacted an emergency plan to transfer pediatricians from city hospitals to serve in the city's four main children's hospitals during the month-long winter break, which starts in mid-January. The number of patient visits during this period goes up, especially around the Spring Festival, a holiday known as the Chinese New Year. Hospitals are also enlisting hundreds of volunteers to assist in children's wards during this period.

While hospitals can make arrangements to ease the crunch during major holidays, the rest of the year presents a problem. China's number of pediatricians dropped by 5,000 from 2009 to 2014, data from the health commission show. On average, one pediatrician in the country serves 2,300 children, more than twice the doctor-to-patient ratio in developed countries.

A 2014 survey by the Pediatric Society of the Chinese Medical Doctor Association (CMDA) found the dearth of doctors was worse in some provinces. The central province of Henan had only one pediatrician to treat 5,000 children.

The government's move to scrap the one-child policy in October, allowing all families to have a second child, is expected to result in 3 million more births every year, and experts said, the current health care facilities for children cannot meet this sudden increase in demand.

Hospitals are offering new contracts to retired doctors and are telling new recruits to work in the pediatric department during the first couple of years in a bid to fill the void. But they are still struggling to cope with the large number of patients.

At the Children's Hospital of the Capital Institute of Pediatrics in Beijing, one of the country's most prestigious hospitals, some parents paid 600 yuan to black market dealers for a doctor's appointment because it was difficult to get a reservation for urgent treatment. Patients usually pay five yuan for an appointment at a public hospital as per government regulations.

This long, expensive wait is often followed by a very brief consultation. "We waited for nearly seven hours for the emergency service when our toddler had high fever, but the session with the doctor lasted less than two minutes," one parent complained.

Meanwhile, doctors say staff shortages are taking a toll on them. One doctor at a children's hospital said he and his colleagues work at least 10 hours every day. "I haven't been allowed to take my annual leave for almost four years and I can only enjoy a full weekend after every few weeks," he said.

The hospital received more than 7,000 patients every day in 2015, he said, and the figure far exceeded its serving capacity. "(The number of patients) has grown by 10 percent per year in recent years, partly due to an increase in the number of patients coming from outside the city."

A nationwide census in 2010 found that two-thirds of the country's 300 million children under the age of 14 lived in rural areas. Many parents tend to bring sick youngsters to big cities for better quality medical treatment.

Meng Jun, a pediatrician in a county in the northwestern province of Gansu, said his hospital had the only pediatric ward in the area, with six doctors to serve 500,000 residents.

"Most pediatricians with a college degree are working in big hospitals in major cities," a pediatrician at a Beijing hospital, who wished to remain anonymous, said. "Less than 5 percent of doctors working in hospitals in smaller townships have attended medical school."

Some physicians in township and village clinics have been trained in pediatrics or nursing at vocational schools, the pediatrician said.

Data from the China Drug and Food Administration showed that one in five patients visiting the country's hospitals is a child. However, resources for pediatric wards fall far short of what is needed to serve these patients. The capacity in pediatric wards account for a mere 6.4 percent of the total number of hospital beds in the country, Zhu Songhan, chairman of the pediatric society of the CMDA, said. Among the country's 13,000 hospitals, only 68 facilities are dedicated to children's health, he said.

Many medical experts blamed the Ministry of Education's 1998 decision to abolish pediatrics as an undergraduate major for the shortfall in the number of specialists in the field. The government at the time said it wanted to stop universities from spreading themselves too thin by pruning the number of majors offered. Since 1999, medical schools across the country stopped admitting undergraduates for studies in pediatrics.

Most child health specialists first studied clinical medicine and then specialized in pediatrics during their graduate studies or had trained during their residency in a children's hospital.

"Every year, about 1,800 pediatricians are trained, which is far less than what is needed," Zhu said. In 2014, 90,000 doctors received medical licenses, but only a few chose to serve in children's wards, he said.

The government has not invested enough on research into children's medicine or the training of specialists, Zhu said. "Child-related health issues are rarely listed as a national research priority and the public health sector pays little attention to this branch of medicine," he said.

"Most pharmaceutical and clinical research projects focus on adult illnesses," the pediatrician from Beijing said. "It is difficult for physicians to get research funding and publish papers on child health issues and this hurts promotions."

Dim career prospects have discouraged students from opting to work in pediatrics. Cui Feifei, a doctor at the Children's Hospital in Beijing, said only two out of her class of 30 students chose to treat children.

In 2015, the health commission lowered the total marks needed to obtain a doctor's license for students specializing in pediatrics. While some doctors said this will help to attract new recruits to the field, others said it will lead to more problems in the long run. Pei Honggang, a doctor at the Shenzhen Children's Hospital, said lowering the bar for pediatricians may affect the quality of care resulting in more disputes with patients, and drive away new recruits.

In most countries, pediatricians require better clinical skills than other specialists because they are dealing with children who are unable to explain their condition clearly, Dr. Wang from the Children's Hospital in Beijing said.

Pediatricians are exposed to higher risks and pressure due to disagreements with patients' families and have less income than other doctors, Wang said. "That's why many people don't choose this branch of medicine."

A 2011 survey conducted by CMDA found out that 90 percent of pediatricians were not satisfied with their salaries. Pediatric wards also have to handle more disputes with patient families than other departments, the CMDA said.

Meanwhile, pediatricians earn less than doctors in other fields of medicine under the current salary system in hospitals. Many public hospitals rely on profits from selling drugs to pay doctors' salaries because they can't break even with fees for medical services. Part of a physician's income also comes from endorsing the purchase of medical equipment.

But doctors treating children, especially infants, prescribe as few medicines as possible and try to minimize the number of tests needed, Liu said. This means that in most hospitals the pediatric wards operate on thin profit margins.

Ni Xin, the president of Capital Medical University's children's hospital, said the government needs to give more financial support to children's hospitals and pediatric wards so that physicians' salaries can be increased. Meanwhile, reforms should be launched on the pricing system of medical services, Ni said.

Some experts are calling for bigger changes. Zhu Fengmei, a public policy expert at the Chinese Academy of Social Sciences, said "the solution for this shortage is to change the system for managing physicians and give doctors more freedom to practice their craft."

Zhu's suggestion touches on a sensitive topic in health care reform plans that would allow doctors to provide services in more than one medical institution or set up their own private practice. Doctors are now tied to one public hospital. The government eased the rules grip in 2009 to let doctors to seek permission to practice in more than one hospital, but the change has not led to the free flow of doctors.

Zhu said giving doctors more flexibility to work in multiple facilities will help allocate medical resources more efficiently and bring the prices for medical services in line with what the market is willing to offer. In the long run, this will help attract more doctors treat children by creating better incentives, he said.