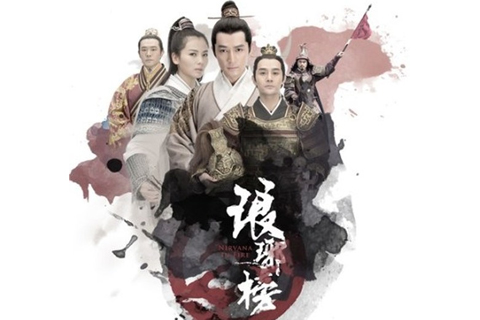 A historical drama revolving around one man's quest to reinstate his tarnished family name and to avenge the death of his father has led to a heated online debate on the topic of social justice. Internet users have tried to draw parallels between the popular television serial set in fourth century China and French author Alexandre Dumas' masterpiece The Count of Monte Cristo set in the 18th century.

Nirvana in Fire, or Langya Bang in Chinese, based on a novel of the same name published online by author Hai Yan was one of the most popular TV shows in the country in 2015. Critics have called it a Chinese version of The Count of Monte Cristo, and the show has ignited discussions on social media platforms, where commentators have compared the plotlines and literary techniques used in the two pieces. Some critics have also used it as a launch pad to discuss cultural differences between China and the West.

A few have pointed out that the two creative works depict a surreal struggle for justice, and that is the key element they share. Both stories are about one man's quest bring down powerful enemies and reinstate justice in a society where law and order has disappeared. One key difference is that the protagonist in the Count of Monte Cristo, Edmond Dantes, uses his fortune to take revenge from those responsible for his unjust incarceration, while Mei Changsu, the hero in Nirvana in Fire, tactfully manipulates internal power struggles within the royal court to his own advantage to punish those who caused his family's downfall.

The Count of Monte Cristo is considered a Western literary classic. According to critic Luc Sante, a frequent contributor to the New York Review of Books, it is a representative work, as inescapable and immediately identifiable as Mickey Mouse, or the story of Little Red Riding Hood.

It might seem jarring to list The Count of Monte Cristo with a European folk tale like Little Red Riding Hood. But they share many common elements, such as a clear division between good and evil characters, and a story arc where the protagonist eventually crushes all enemies and finds catharsis after a long struggle. To some extent, The Count of Monte Cristo is a thriller for adults.

In Chinese literature, novels on martial arts have comparable storylines. They discuss a similar question: how does one fight for justice in a society where law and order has broken down and there is an absence of truth? All these literary works tend to provide the same formulaic answer: The main character must acquire the skills, knowledge wealth or connections needed to ultimately secure justice.

Some Western literary critics have slammed the ideal of heroism portrayed in Dumas' work, saying that the protagonist's claim that he represented a higher justice inadvertently paved the way for actions that are morally reprehensible, and are no different from the behavior of those who were unjust towards him.

"The hero becomes a sort of divinely inspired madman, who imagines himself to be, and apparently is, a mere tool and agent of God's justice. His behavior transcends moral laws, his plans transcend human intelligence, and he becomes impossible to identify with as a character," said one book review published on Amazon.com

Clearly, the flaw in Dumas' work is that it raises the wealthy hero to the status of a demigod. This in turn creates the illusion that in a chaotic society where the rule of law is absent, the only alternative is to take matters in to one's own hands, rather than pushing forward social reform.

Nirvana in Fire has the same message. Its main crusader for justice, Mei Changsu, is even more powerful than Dantes. Mei, the son of a military commander who had been framed as a traitor and killed by political rivals, works his way to the top of the power pyramid, through Machiavellian tactics and uses his wisdom and influence in the royal court to assist a kind prince to ascend the throne.

The illusion created by Nirvana in Fire is that no matter how dysfunctional a society is, everything will fall into place when the highest seat of power falls into the hands of a benevolent and wise leader.