An Indian Poet at the Centre of Controversy Again 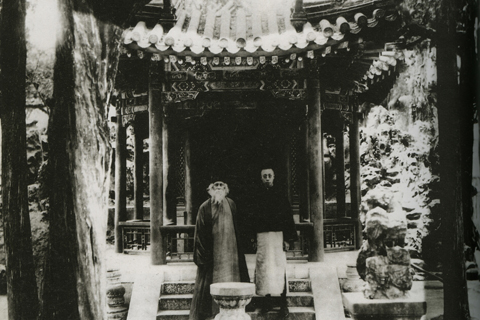 Indian poet Rabindranath Tagore with Pu Yi, the last emperor of the Qing Dynasty (1611-1912), during his visit to China in 1924

A Chinese publisher recent announcement that it was pulling off store shelves a volume of poetry by the Indian writer Rabindranath Tagore made news inside and outside China.

The announcement came after a translation by the 44-year old Chinese writer Feng Tang that was published in July was attacked on the Internet and later called "vulgar" by Xinhua, "pornographic" and "rabble-rousing" by the Times of India, and "a vulgar selfie of hormone saturated innuendo" by China Daily's Raymond Zhou.

The decision to take the book off store shelves left many scratching their heads. Why get so upset about a 100-year old collection of mini-poems by an Indian poet who lived from 1861-1941?

The ostensible reason is, of course, the translation. The third poem in the volume, titled Stray Birds, reads like this in Tagore's own English translation from the original Bengali in 1916: "The world puts off its mask of vastness to its lover. It becomes small as one song, as one kiss of the eternal." Critics of Feng's translation to Chinese express anger that the first line becomes something like: "The world unzipped his pants in front of his lover."

Then there is the 91st poem in the collection, which originally read: "The great earth makes herself hospitable with the help of the grass." Feng replaces "hospitable" with "sao," a word that can be used to describe an overly flirtatious woman.

Defenders of the new translation argue that it is more poetic. Li Yinhe, a sociologist famed for her studies of human sexuality, defended Feng's version of Tagore, saying it exceeded the standard translation "in terms of poetic quality, as he has brought out the beauty of poems, only in his way."

The subtext to all this is the long-running debates on translation theory in China. Should a translation be "faithful," "expressive" and "elegant" or "sincere," "natural" and "creative"? What "right" does the translator have to put himself in the work? To what extent is a translation its own literary creation? How much leeway does a translator have?

It should be noted that Tagore would likely be more liberal than Feng's critics. He once confessed that in translating his own poetry from Bengali to English, "I timidly avoid all difficulties, which has the effect of making them smooth and thin. I know I am misrepresenting myself as a poet to the Western readers."

A second reason for the uproar, I suspect, is that many critics simply don't like the work of Feng, who is known for his novels of Beijing youth set in the 1990s. Feng – who started out as a medical student, got an MBA, and worked as a McKinsey consultant before becoming a novelist and poet – does not shy away from depicting unromantic sex and has been compared to Henry Miller.

He is the author of Oneness, which the online journal Paper Republic described as a "semi-pornographic" novel involving monks and nuns. The idea that a writer with Feng's pedigree should be chosen to translate Tagore, whose poems are still widely admired in China and even assigned to middle school students, is undoubtedly galling to many, especially since there is no dearth of available translations. The poet's early translators were literary giants like Zhang Zhenduo (1898-1968) and Bing Xin (1900-1999), and their versions are still in print.

People's Literature Publishing House was, moreover, set to publish the last volume of the complete works of Tagore, translated directly from Bengali to Chinese for the first time, by the respected Soviet-educated scholar Dong Youchen, in August, just one month after the Zhejiang Press's Stray Birds came out. Feng, who the China Daily critic Zhou called "a testosterone-driven lad obsessed with one thing and one thing only," is something of an odd man out in this company.

And, while it might seem bewildering that Tagore's poems should cause a hullabaloo and serve as proxy for long-running literary and cultural debates in this day and age, it is also somehow fitting. The writer was at the center of controversies both poetic and political from the moment he first set foot in China on April 12, 1924, at the invitation of the renowned intellectual and reformer Liang Qichao. Tagore was by then a global cultural luminary, becoming in 1913 the first Asian to receive the Nobel Prize for Literature. He was astonishingly prolific – his collected works fill 18,000 pages in their original Bengali – and multitalented. In addition to writing, he composed more than 2,000 songs, including what are now the national anthems of India and Bangladesh; founded an ashram, an experimental school and a university; engaged in political debates and social criticism; actively opposed British colonialism; and traveled the globe lecturing on poetry and peace and promoting spirituality over materialism. Tagore's reputation preceded his arrival and a host of intellectuals were standing on the Shanghai dock to greet him when he arrived. Among them was the poet Xu Zhimo, who accompanied Tagore on his travels around the country and translated for him in visits with people like the deposed emperor Pu Yi and the Peking opera star Mei Lanfang.

Tagore said that he came as "a pilgrim to pay respects to Chinese culture" and described his visit as "a great opportunity for (China and India) to reopen the ancient channel of spiritual communication once again." In his first speech, he made clear that he did not intend to talk about politics or promote any particular ideology. "Do not, then, ask for a message from me. People use pigeons to carry messages; and, in the wartime, men valued their wings not to watch them soar, but because they helped to kill. Do not make use of a poet to carry messages." Tagore's plaintive request would go unfulfilled because, in the churning intellectual and political turmoil of the era, it proved impossible for many to believe that he did not have a political agenda or, at the very least, that he was not tainted by what they saw as the agenda of his host.

Liang had been a courageous reformer in his youth and was one of the first Chinese to write about Karl Marx. He attacked Confucianism and encouraged China's youth to learn from the West. But he later spent time in Europe in the wake of World War I and had become disillusioned by the despair and destruction he saw. Gradually, he shifted his views from admiration to criticism and argued that the Chinese should not have blind faith in the scientific and technological civilization of the West, but should seek strength in their own traditions.

This argument did not sit well with the many intellectuals who, in the May Fourth era, argued that China had to learn from the West, from "Mr. Science and Mr. Democracy," or with those who promoted the even more radical idea of Marxism. Tagore praised the spirituality of the East and opposed the materialism of the West. He told one audience that he could not "bring myself to believe that any nation in this world can be great and yet be materialistic" and went on to commend China for not having "developed the prevailing malady of the world, the lunacy of an unmeaning multiplication of millions, the production of those strange creatures called multimillionaires."

Tagore's anti-materialism and association with Liang caused many intellectuals to oppose his visit, albeit often without opposing the man himself. Mao Dun wrote that "we respect Tagore because he is pure in heart," but added that "we do not welcome the Tagore who loudly sings the praises of the Oriental civilization, nor do we welcome the Tagore who creates a paradise of poetry that has made our youth intoxicated and self-complacent." Guo Moruo recalled the profound influence that Tagore's poetry had once had on him, but argued that Tagore's preaching was "the morphine and coconut wine of those with property and leisure." Chen Duxiu, a founder of the Communist Party and also the first person to translate Tagore's poems into Chinese, declared that by advocating peace, Tagore was "no more than a persuader for the imperialists."

By April 17, five days after his arrival in the country, radical students were distributing anti-Tagore leaflets at his talks that contained claims he was criticizing them for trying to improve their material circumstances and that his defense of China's spiritual civilization was really a defense of the barbarity of the ruling classes. At some talks, they became disruptive. Tagore decided to give only one more lecture and left China on May 30.

In his last speech, he said: "Some of your patriots were afraid that, carrying from India spiritual contagion, I might weaken your vigorous faith in money and materialism. I assure those who thus feel nervous that I am entirely inoffensive; I am powerless to impair the career of progress, to hold them back from rushing to the marketplace to sell the soul in which they do not believe. I can even assure them that I have not convinced a single skeptic that he has a soul, or that moral beauty has greater value than material power."

But, many in China do remain convinced of the merits of Tagore's poetry, and many more are certain to be drawn to his work by this translation kerfuffle.

Sheila Melvin is a newspaper columnist. Her latest book, Beethoven in China: How the Great Composer Became an Icon in the People's Republic, co-authored with Jindong Cai, was published by Penguin Books