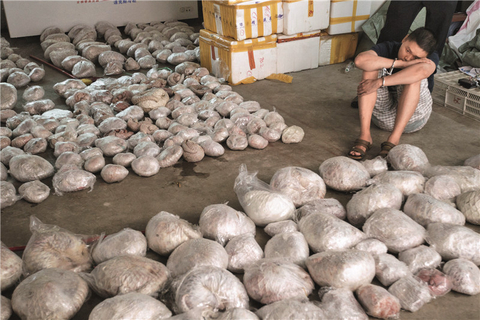 A haul of slaughtered pangolins that police in Guangdong Province seized from illegal traders in 2014. The animals are used in traditional Chinese medicine

(Beijing) – A long-anticipated draft amendment to China's wildlife protection law has sparked a controversy, with many conservationists saying that instead of offering better protection to endangered species, the revision does the opposite.

For years, conservationists have called for better legal protection of wild species, many of them endangered due to rapid exploitation and development. Despite public opposition, practices such as breeding tigers and bears to use their body parts in traditional Chinese medicine and other commercial uses have never been stopped.

The hope was that the law would be changed to address these issues, but many conservationists say they are frustrated by the proposed revisions. They said although some progress in wildlife protection would be made, the revision in many ways does the opposite because it classifies endangered species as "natural resources" that can be bred in captivity for commercial purposes.

The draft also opens door for public exhibitions or performances of wildlife by authorizing provincial or city governments to issue permits for the shows.

"It is shocking," said An Xiang, the director of Dexiang Law Firm in Beijing. Allowing exhibitions and performances with little central government supervision in a law supposedly designed to protect the species is a step backward, said An.

Animal and environmental protection organizations such as China Biodiversity Conservation and Green Development Foundation and Friends of Nature have started organizing online campaigns to push legislators to alter the amendments.

The first article of current wildlife protection legislation says "the law was made to protect, develop and properly utilize the wildlife resources," wording that is often criticized by animal protection experts.

"The law offers protection for utilization," said Sun Quanhui, senior science advisor at World Animal Protection China, a non-profit animal welfare organization. Sun said that when the law was promulgated, the economy was underdeveloped and many people relied on hunting and trading animal parts for a living. But the situation has changed with economic growth, he said, so the law should be updated accordingly.

Sun was disappointed by the latest draft because it continues to say that its purpose includes "regulating the utilization of wildlife."

Many animal protection experts interviewed by Caixin said that the existing law includes many loopholes that create room for poaching and illegal trading of wildlife products that have pushed many species to the verge of extinction over the past two decades.

The law also encourages breeding wildlife for commercial use, but critics say this neither protects wild animals nor means farmed animals live in good conditions. The Hong Kong-based charity Animals Asia the number of black bears being farmed, many so their bile can be used in traditional Chinese medicine, has risen to 10,000 in recent years. But their living conditions are often poor – and this practice seems to do little to help the population of the black bears in the wild increase. For instance, the population of black bears in the Changbai Mountains, in the northeast, actually fell by 93.4 percent from 1990 to 2010.

Also, more than 6,000 Siberian tigers are living in captivity, some for public shows and others for their pelts. This has not stopped the number of wild Siberian tigers in the country to decline to less than 30, state media says.

A 2015 report by the World Wildlife Fund, an international non-governmental organization, blamed commercial utilization as a major factor threatening wildlife species in China. The report said that over the past four decades, the population of the country's terrestrial vertebrates, which includes birds, mammals, amphibians and reptiles, fell by nearly half.

"China has also experienced one of the greatest biodiversity losses globally," the report said.

Animal protection experts say they are frustrated that the new draft law continues viewing wildlife as a resource to be developed and used. The word "utilization" appears 24 times in the new draft, compared to eight times in the current law.

Mang Ping, a professor at the Central Institute of Socialism in Beijing who has advocated for the wildlife protection law to be revised for years, said she was disappointed by the draft since it grants legal basis for commercial use of wild animals without clear restrictions.

An also said the draft law helps industries involved in wildlife exploitation. The proposal allows for using animals and their parts for scientific research, breeding, public exhibition and other special purposes through a license from provincial authorities, which contradicts a 2013 regulation that bans all animal performances, he said.

An said the draft also includes a stipulation that any use of wildlife products in traditional Chinese medicine and food production must follow the country's drug and food safety rules – which actually offers a legal basis for the activity.

"If the draft revision is approved, extracting bear bile will have solid legal support as long as the practice meets food safety standards," said Fang Dan, a bear protection activist. "Many NGOs' efforts over the years will prove to be in vain."

Some scholars say they are happy with the draft because it says that wildlife utilization practices must follow "social principals and morals," and bans cruelty to animals. However, critics say the wording is too vague to be useful.

Nevertheless, this is the first time in China that cruelty to animals is clearly banned by law, said Chang Jiwen, an environment policy expert at the State Council's Development Research Center. Chang, who participated in the drafting of the legal amendment, said another important area of progress regards protecting habitats, and pointed out that it requires central and local levels of government to set aside funds for wildlife protection.

Sun also applauded content on habitat protection, saying greater effort should be made to protect animals in the wild rather than breeding them in cages.

Zhou Ke, a law professor at Renmin University in Beijing, said China's long tradition of using wild animals for food and medicine products and the business chains that have been formed are major hurdles in promoting wildlife protection.

He argues that this will require the government to educate the public and help those in animal industries seek new livelihoods. "Wildlife protection law is a small part of a country's entire legal framework, but it is a test of a country's level of civilization," said Zhou.