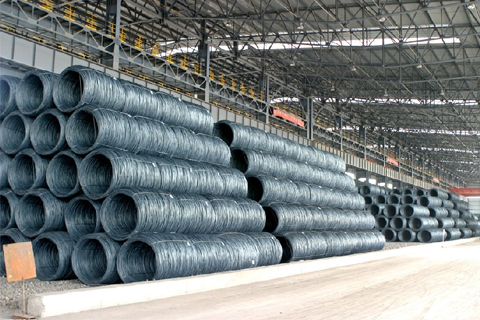 (Anyang, Henan) – China's steelmakers have done booming business over the past two decades, but they are now struggling to survive in the face of weakening demand due to the economic slowdown and the central government's efforts to curb pollution.

An index by China Iron and Steel Industry Association (CISA) shows that average price of steel dropped by more than 32 percent by the end of 2015, from the same time a year earlier. This follows slides of 16 percent and 6 percent in 2014 and 2013, respectively.

More than half of the country's steel producers reported losses in 2015, causing losses for the industry to hit 64.5 billion yuan, the industry association said.

Big steelmakers like Shanghai-listed Anyang Iron and Steel Group, based in Henan Province, are feeling the pain. The central province's largest steelmaker, with annual production capacity exceeding 10 million tons, has reported losses since 2012.

This has forced company executives to consider not handing out annual bonuses to employees. We decided "to pay the bonus as usual in 2015, but it may be canceled next year," said Anyang Steel's chairman, Li Tao.

The industry has been a main contributor to the nation's economy in recent decades, especially after the 2008 financial crisis, when the government rolled out a 4 trillion yuan stimulus package. In 2012, the steel sector reported the highest revenue of any industry in the country.

Between 2008 and 2012, national production capacity rose by 42.7 percent. But since 2013, worsening overcapacity has prompted the central government to start a campaign to try to cut back.

In a January meeting with executives and industry officials in Taiyuan, in the northern province of Shanxi, Premier Li Keqiang reemphasized efforts to trim production overcapacity and close unprofitable factories. Scaling back was also atop the agenda of the Central Economic Work Conference in December, a Communist Party meeting called to set the economic roadmap for 2016.

Top leaders have the reason to worry. In 2015, China produced 800 million tons of raw steel, but only 664 million tons was used. Both figures were lower than the year before for the first time in a decade. More worryingly, total production capacity stood at 1.1 billion tons.

The prospects for steelmakers are also gloomy. Li Chuangxin, director of the China Metallurgical Industry Planning & Research Institute, predicted that the country's steel consumption will continue declining and by 2030 stand at less than 500 million tons.

A CISA survey covering the first nine months of last year ranked Anyang Steel No. 35 of 59 large and medium-sized steel companies in the nation in term of profitability. The firm has more than 30,000 employees and a debt ratio of more than 80 percent. Despite this, Anyang Steel has not halted production or cut its workforce, counting on a business rebound.

Is that realistic? Zhao Xizi, the former head of the old Ministry of Metallurgical Industry, doesn't think so. "Spring for China's steel industry will never come," he said.

Anyang Steel, established in 1958 as part of a central government strategy to develop steel production facilities nationwide, was initially among the 18 provincial-level producers with designed capacity of around 100,000 tons. In the 1980s, it was one the country's fastest growing steel companies, and by the end of the decade had expanded its capacity to 1 million tons.

The company was also one of the earliest to suffer from the market slowdown and overcapacity problems, partly because its inland location boosts transportation costs. The firm also lacks any unique products to help it compete with factories in neighboring cities.

The large workforce is another big burden for Anyang Steel. It has more than 30,000 permanent and contract employees, whose total salaries and benefit payments exceed 2 billion yuan each year. Payments on bank loan interest and taxes push the company's annual operating costs to more than 7 billion yuan, said Li, who has headed the firm since 2013.

In 2012, Anyang Steel reported a loss of 3.5 billion yuan, the first since its founding. This spurred Li to try to cut production costs and the size of the workforce and to improve the sales network. In the summer, Anyang Steel mulled raising money through a private placement, but dropped the idea due the stock market turmoil.

Li's efforts have done little to help the steelmaker. In the first three quarters of 2015, Anyang Steel reported a loss of 1.28 billion yuan, and people close to the firm said that since January the company has lost 100 yuan for every ton of steel it makes.

Anyang Steel offers a snapshot of a troubled industry. A survey by the China Chamber of Commerce for Metallurgical Enterprises at the end of 2015 found that 70 percent of 110 surveyed steelmakers were running losses.

China's steel production capacity rose from around 500 million tons in 2009 to 1.1 billion tons in 2013, largely fueled by the stimulus policies. To put in perspective how rapid and large this increase was, it took nearly six decades for capacity to rise from 2 million tons in the early 1950s to the level in 2009.

Many steel companies are finding they have to idle some of their facilities to cut losses as the market cools. CISA has said that in 2012 less than 70 percent of the country's steel production facilities were operating. Many overseas experts say that anything below 75 percent in a developed country is an indication of overcapacity.

Liu Haimin, deputy director of the China Steel Development and Research Institute, said industrial companies usually enjoy sustainable growth when their average profit margin is around 5 percent. From 2003 to 2007, major steel companies reported margins of 6.5 percent to 8 percent, but after 2009 the figure slid to less than 1 percent. In the first 11 months of last year, the industry's average profit margin stood at minus 1.99 percent – meaning that for every 100 yuan worth of steel products a firm sold, it lost nearly 2 yuan.

Liu said a major reason for the slump in profitability is a large number of loss-making companies dumping their products onto the market at very low prices. Data from CISA show that from January to November last year more than 10 firms lost more than 500 yuan loss for every ton of steel made. The worst performer lost 1,000 yuan.

Amid these problems, local officials are keen to help struggling companies because the firms are viewed as economic pillars and a large number of layoffs would cause big headaches.

In late 2015, a number of firms – including Lingyuan Iron and Steel Co. in the northeastern province of Liaoning; Baogang Group in the northern region of Inner Mongolia; and Chongqing Iron and Steel Company, in the southwest – said they had received subsidies of more than 100 million yuan from their local governments. Anyang Steel said it benefitted from a new policy that helped it save 60 million yuan in electricity costs.

But policymakers in Beijing want to get rid of the poorest performers, a move they see as benefiting the entire industry, and since October, several companies in Fujian, Hebei, Liaoning and other regions have halted production.

The industry information portal custeel.com says facilities with the capacity to produce 67 million tons of steel a year suspended operations in 2015. Data from CISA showed that in the last 10 days of December, the country was producing 2 million tons a day, 12 percent less than the same period a year earlier.

In a meeting of the State Council on January 22, Li said production capacity should be cut by as much as 150 million tons over the next five years and no new factories should be opened. The cabinet also agreed to set up a fund dedicated to handling issues related to plant closures, such as employee settlements and disposing of bad loans.

Li said Anyang has two options: merge into a larger company or acquire some smaller ones to form a stronger entity. Either way, Li is waiting for policy direction. "I am still confused" on which way will Anyang Steel should go, he said.