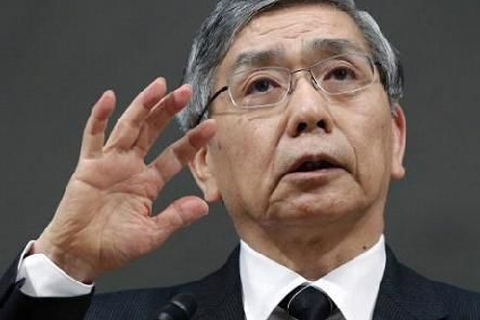 (Shanghai) – Bank of Japan Governor Haruhiko Kuroda said the regulator is assessing the impact of recently introduced negative interest rates and will lower them further "if necessary."

The objective is "to stimulate the economy and achieve the 2 percent inflation target at the earliest possible time," he told Caixin on February 28, after a meeting in Shanghai of G-20 finance ministers and central bank governors.

He added that the BOJ is, for now, "watching and assessing the impact of our new policies on the financial market and also on the real economy."

Kuroda said commercial banks in Japan have reduced interest rates on mortgage and corporate loans by 20 and 10 basis points, respectively, since the BOJ adopted negative interest rates in late January.

"The impact of the new monetary policy framework," he said, referring to the combination of quantitative and qualitative monetary easing (QQE) and negative interest rates, "has had the intended impact on the financial market, and this reduction of real interest rates would further stimulate corporate investments as well as housing investment in the coming months."

He also said the direct impact of negative interest rates on the banking industry was "minimal."

"If you look at banking sector profitability in the last three years, in which we continuously implemented QQE to reduce the entire yield curve, the lending rate actually continued to decline, and yet the banking sector enjoys a very high profit levels," he said.

The BOJ is due to announce its next monetary policy decision on March 14. Some experts have suggested that major central banks around the world, especially the BOJ, consider adopting an extreme strategy involving "helicopter money" – where the government makes more money available to the public to jumpstart the economy – considering they do not have much room to maneuver left.

Former U.S. Federal Reserve chairman Ben Bernanke suggested a version of the idea – a tax cut explicitly coupled with incremental BOJ purchases of government debt, so that the tax cut is in effect financed by money creation – in a 2003 article.

Had Japan followed the practice, its nominal GDP would have been higher and it would have achieved greater real output, higher inflation and a lower level of debt relative to GDP, Adair Turner, former chairman of Britain's Financial Services Authority who is now a senior fellow at the Institute for New Economic Thinking in New York, wrote in a new book.

But Kuroda rejected this approach in his interview with Caixin. "The idea itself, of course you can say it's interesting, but we will never do that. And by the way, our current fiscal law prohibits the BOJ from directly financing government deficit."