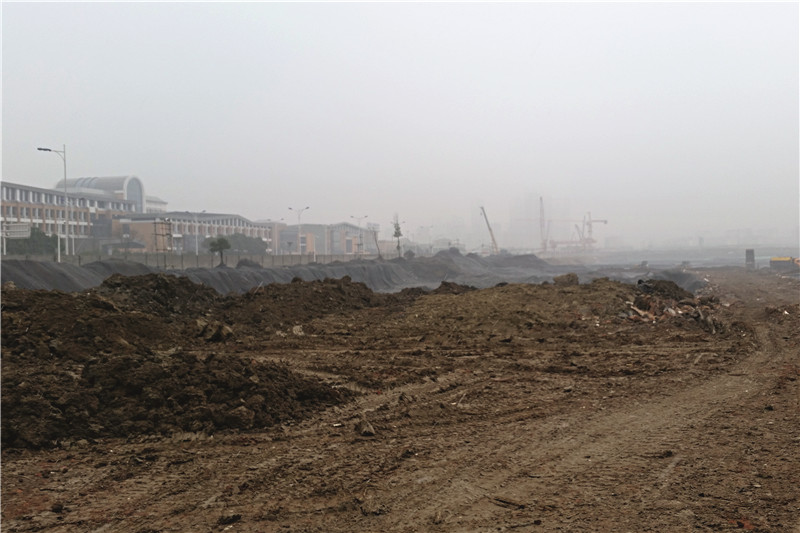 The plot of land across from Changzhou Foreign Language School, in Jiangsu, where the local government has been burying tainted soil to keep it from fouling the air

(Beijing) – When the new term started in late February, many of the 2,400 students at the Changzhou Foreign Language School in the eastern province of Jiangsu weren't sure they wanted to go back to class.

Some parents decided to keep their children at home, while others have tried to transfer them to different schools. Ever since the popular multilingual secondary school, with classes from the seventh to 12th grades, moved to a new 153 acre campus in September, students have been falling ill. Parents say a foul odor shrouded the school in December, and many students have suffered from rashes, drowsiness and nosebleeds.

Parents told Caixin that 549 students had health done in January. About 140 of them were diagnosed with thyroid nodule calcification – lumps in the thyroid gland – and the number of white blood cells in their bodies had dropped, making them more prone to infections.

When the troubles began, parents suspected that the odor was coming from an abandoned plot of land opposite the campus. Three large pesticide factories were on the site for decades, before they were relocated in 2010. The largest of them was Jiangsu Changlong Chemicals Co. Ltd., a subsidiary of the country's biggest pesticide producer, Shenzhen Noposion Corp.

School officials and environmental authorities who met parents on January 6 insisted that air quality tests showed no risk to human health, but they were mum about what was causing the stink.

After parents' petitioned, the Ministry of Environment Protection said on January 29 that an inspection of the land in mid-January by provincial and Changzhou City environmental authorities found that levels of petroleum hydrocarbons and benzyl chloride in the soil under the closed pesticide factories were above its standards.

The ministry said investigators found 1,500 cubic meters of contaminated soil giving off the pungent smell. The investigation had also unearthed buried solid waste, but authorities failed to give any details about it.

Gao Yuefeng, deputy director of the Changzhou Xinbei District Environmental Protection Bureau, said in mid-February that an investigation conducted between 2011 and 2013 found the soil was tainted "by outdated production methods used by the plant and due to lower environmental protection standards in place at that time." But the level of contamination was not serious, he said.

Daily air quality data from the area of the school showed it met national standards, Gao said. "To be sure, there is no problem with the air now."

The school asked all students to return for the new semester on February 22. A day before the new term was to start, it released a report indicating that air, soil and groundwater near the campus were safe, based on tests done by a private company the school had hired.

But many parents were unconvinced. A group of 1,200 parents have written a letter demanding to know why the school chose the site for the new campus and how the monitoring group was measuring air quality.

Claims by some former workers that the former pesticide plant flouted environmental laws and disposed toxins haphazardly have added to the parents' worries. The actual level of pollution is much more severe than what is stated in the report issued by the environment ministry, said Xu Lixiong, a retired worker from Changlong Chemical.

In October, Xu and a few other former co-workers told the district environmental bureau that Changlong Chemical had buried toxic waste from the plant at the site, before it moved. Xu said they haven't heard back from the government since the complaint was lodged.

Another former Changlong employee, who wished to remain anonymous, said that between 2008 and 2010, the plant buried unknown amounts of untreated chemical waste, eight to 10 meters below the surface of the ground. Another worker said the waste included residue left over from producing pesticides and other solvents that were marked hazardous to human health. The whistleblowers could not identify the specific kinds of chemicals that were dumped.

Changlong discharged chemical waste once every three days into a river that flowed to the Yangtze River, Xu added.

Gao denied Xu's claims. He said officials from the environmental ministry and the local government had done another investigation in the area in mid-January based on Xu's tip-off, but didn't find any buried hazardous waste.

"We dug 30 holes and spent more than 1 million yuan on a 15-day investigation, but didn't find any solid chemical waste as they claimed," said Gao. "There were only 30 kilograms of herbicide left when the plants relocated."

Xu said the investigators used an inaccurate map of the land and took the samples from the wrong places.

The local government said in a report published on the school's website that it started cleaning up the land in late January. The local environmental bureau's review of the project on February 15 said air and soil quality in the area met national environmental standards.

The restoration work included reburying the tainted soil. Covering contaminated dirt with a layer of fresh earth and planting trees was a way to fix the problem recommended by many experts, said Gao.

The local government has canceled plans to build a US$ 300 million shopping complex on the land. Instead, a park will be built, Gao said. He did not comment on whether the plan for the mall was dropped because the site was considered too polluted for development, saying that the government wants to make sure the area is cleaned up quickly since it's surrounded by residential communities.

But this is only a temporary solution to deal with tainted soil, said Zhang Yi, director of Shanghai Institute for Design & Research on Environmental Engineering. "Soil polluted by chemical plants has little capacity to decompose naturally. Simply covering the contaminated layer with clean soil without treating it may even make the problem worse."

Some parents are skeptical that the government's efforts will fix the problem. Some 460 students were absent on the first day of the new semester, and a parent who decided to send her child to school said the decision was difficult.

"The government has wrapped up the case," she said. "We know the land is toxic, but what can we do? The children have to attend school."