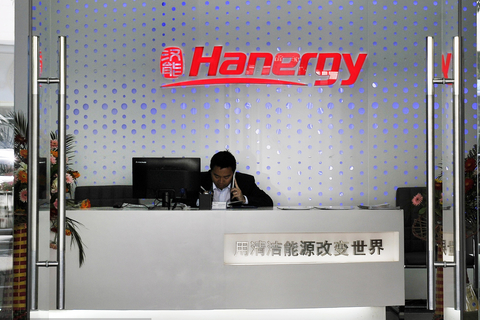 (Beijing) – A subsidiary of troubled clean energy firm Hanergy Holding Group Ltd. has failed to repay a debt of more than 1 billion yuan, a person familiar with the situation says.

Hanergy borrowed the money through a subsidiary called Jin'anqiao Hydropower Station at an annual interest rate of 7.8 percent, but failed to make a full repayment by March 14 as agreed, the source said.

Jin'anqiao built and owns the country's largest private hydroelectric station, which is on the Jinsha River in the southwestern province of Yunnan. It raised the money it owes by issuing a bond through a private placement in 2014 to undisclosed investors.

The person with knowledge of the matter did not say how Hanergy used the money. The firm is negotiating with the lenders and SPD Bank, which underwrote the bond, on repayment options, he said.

Jin'anqiao issued another two bonds worth a combined 1.5 billion yuan that mature next year.

Investors are worried that the default means Hanergy's troubles may be coming to a head as conditions in its solar energy arm deteriorate, a bond analyst said.

Hanergy Thin Film Power Group, a Hong Kong-listed solar panel manufacturer, was the world's biggest solar firm by market value in 2015 before it suspended trading of its shares on May 20 because the value of its stock fell by nearly half.

The suspension continues as the firm struggles with a supply glut and mounting debt.

In February, Hanergy Thin Film warned investors to be prepared for it to report a "significant loss" over the past year, partly because sales with its parent, previously a major source of revenue, fell by 96 percent.

It also said it was unable to collect many accounts receivable from its parent.

Hanergy Thin Film's financial report in the middle of last year said it lost HK$ 59 million in the first six months of 2015, compared to a profit of more than HK$ 1.7 billion over the same period a year earlier.

This was the first time the company reported a loss since it went public through a backdoor listing in 2011. It has made major staff cuts to try to control costs.