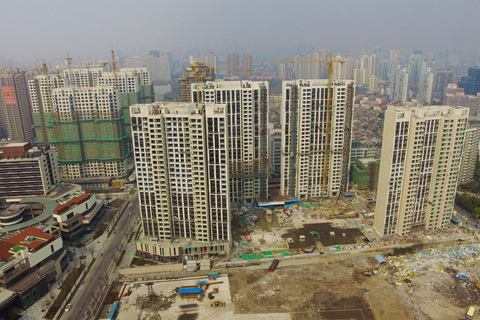 (Beijing) – Shanghai's government will introduce measures to cool its housing market, including requiring bigger down payments for buyers of second homes, a person with knowledge of the matter says.

The government will announce the new rules in the next few days, the source said on March 23.

The changes would target people purchasing their second home, the person said. For example, second homes of 140 square meters or more would require down payments of 70 percent of the property's price. The ratio for homes smaller than that would be 50 percent.

Banks in Shanghai have been requiring homebuyers to come up with down payments of 40 percent of the property's price tag, no matter the size.

Housing prices in major cities such as Shanghai, Beijing and Shenzhen have soared in recent months after the central government moved to ease restrictions on home purchases nationwide to help prop up the troubled economy and trim the inventory of unsold homes, particularly in smaller cities.

The central bank and the Shenzhen office of the banking regulator recently met with executives from about 20 commercial banks to discuss risks related to mortgages held by homeowners in the southern city, people who attended the gatherings said.

Banks were told to conduct stress tests on their home lending because a strong rebound in property prices in the country's biggest cities has sparked concerns that the market may be overheating, the sources said.

Employees of banks in Shenzhen and Shanghai have also said that regulators recently asked them to step up their scrutiny on the sources of borrowers' down payments.

Shanghai's Communist Party secretary, Han Zheng, told the media during the recent meeting of the legislature in the capital that speculation had led to unhealthy development of the housing market in the eastern metropolis.

He vowed that the government would address any irregularities found in how home purchases were financed.

Officials in Shanghai recently clamped down on online peer-to-peer lending firms, private fund management companies and real estate agencies that were offering buyers loans to fund their down payments in violation of government rules.

The person with knowledge of the coming curbs said banks in Shanghai will also be told to stop competing with each other to offer cheaper loans to home buyers, a practice that has been common in recent years.