Intense Jostling over an Indebted Steelmaker 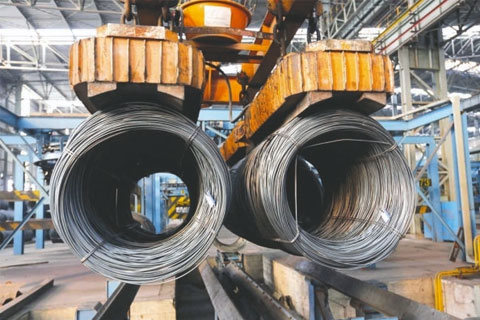 (Beijing) – A day of reckoning is fast approaching at Bohai Steel, a financially crippled steelmaker that has idled two-thirds of its production lines and cannot repay the 192 billion yuan it owes to more than 100 creditors.

But in the run-up to the reckoning, intense jostling among steel executives, government officials, bankers and others engaged in talks over Bohai's debt has made it impossible to predict what the future holds.

A creditors committee formed in March by the government of Tianjin, which owns Bohai, drafted a restructuring plan. However, a person close to the government's State-owned Asset Supervision and Administration Commission (SASAC) said that progress toward a settlement has been stymied by concerns raised by bankers.

Wary bankers may be questioning the committee's proposal to grant Bohai loan extensions and cut interest rates on existing debt by 10 percent. Separately, some bankers have asked the government to allow banks to sell land that Bohai used as collateral and use the proceeds to pay down debt. But officials have floated a separate plan that clashes with the bankers' proposal, a bank source said, on the grounds that Bohai apparently lacks clear title to some collateralized land.

The government "has asked banks to continue lending" to Bohai "and the government will pay the interest," said a source at a Tianjin branch of a major state-run bank. In addition, the central bank has offered at least some financial support to banks.

Another option the government is considering, the source said, is a debt-for-equity swap program. People close to the creditor committee determined that the steelmaker's assets were worth about 290 billion yuan.

The company, which borrowed heavily to expand on the back of a government stimulus program following the 2008 global financial crisis, now owes "an astronomical" amount, a bank source said.

Banks willingly opened their coffers in years past because "we thought it would be very safe to lend several billion yuan" to the state-backed steel company, the source said.

Bohai's 105 creditors include the Bank of Beijing, Bank of Tianjin and Tianjin Binhai Rural Commercial Bank, each of which is owed more than 10 billion yuan, sources said. Several major nationwide banks are also holding toxic debt, including China Construction Bank, Bank of China and Industrial Bank.

Bankers have been particularly skeptical about a suggestion that Bohai launch a restructuring yet stay in business after selling assets or swapping debt for equity. A common fear is that without a management overhaul and transparency, a new and revamped Bohai would repeat the same mistakes that buried it in debt.

"Without effective corporate governance, any good restructuring plan will have implementation problems," said one bank executive.

As these firms expanded production levels beyond market demand, the central government is ordering plant shutdowns and employee cuts in industries affected by overcapacity.

Bohai, which has an annual production capacity of 22 million tons of steel products including bars and plates, has been in the bull's eye of the nationwide effort to trim excess capacity in the steel sector. Yan Bingzhu, chairman of the Bank of Beijing, told reporters in early March that under a central government order Bohai must cut its capacity by 15 million tons in 2016.

That announcement came a few weeks after Tianjin officials called on financial institutions to support local steel companies. The call was interpreted by some banks as a sign of trouble, prompting them to call in loans.

Bohai's debt problems were again thrust into the spotlight in late March, when a company affiliate missed a payment on a 350 million yuan trust plan that promised investors yields of more than 9 percent. The investment product was issued by Beijing-based National Trust on behalf of Tianjin Iron and Steel Group Co., a Bohai subsidiary.

People close to National Trust said most investors will be fully repaid by April 29. Some investors have already redeemed the product, the source said, adding the trust is working closely with the steel company to resolve the problem.

Tianjin Iron & Steel's liabilities rose to 60 billion yuan early this year from 32.8 billion yuan at the end of 2014, the reports said.

The subsidiary has apparently left banks in the lurch. A person close to the company said that "Tianjin Iron & Steel has been unable to pay banks the interest (on its loans) since 2011."

Company employees have also felt the heat. Several bank sources said Tianjin Iron & Steel raised about 3 billion yuan by selling a high-yielding trust product to its workers through a firm called Northern International Trust Co., but ever since has had trouble repaying them.

To repay workers in the future, banks may have to come to the company's aid. "The government wants to pay the employees back," said a bank executive. "But where will the money come from?"

Also in trouble is Tianjin Pipe, the only Bohai subsidiary that has not idled its plants.

As of June last year, the pipe company's liabilities totaled 46 billion yuan, according to Dagong Global Credit Rating Co., including more than 10 billion yuan in outstanding short-term loans. Loans worth some 26 billion yuan are due to mature by June.

"The company has a heavy debt burden and faces a great deal of repayment pressure in the short-term," the report said.

"It looks like a steel company's crisis, but there's actually a huge systemic risk," the executive said.