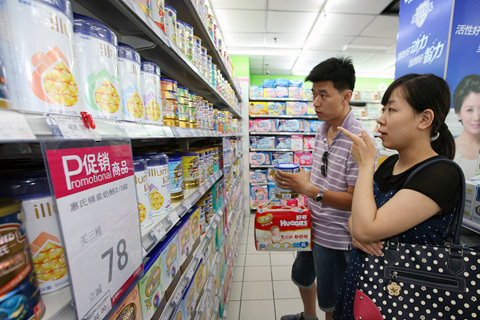 (Beijing) – Two experts have questioned how the government is handling yet another problem in the baby formula industry – one involving knockoffs that comes in the wake of a scandal eight years ago that saw six babies die and hundreds of thousands of others fall ill due to tainted milk products.

The China Food and Drug Administration (CFDA) said on April 4 that it ordered a nationwide inspection of baby formula on store shelves after police in Shanghai broke up a ring that was putting cheaper milk products for infants into packages that looked like those of several name-brand companies.

The food-safety watchdog did not initially say what brands were involved, but said the formula met national standards. It also did not say when the illegal activity took place.

The Procuratorate Daily, a little-known newspaper linked to the country's top prosecutors' office, reported on March 22 that police in Shanghai acted on a tip-off to detain six suspects involved in counterfeiting baby formula products in September last year.

The newspaper reported that the ring sold the products to retailers in Zhengzhou, Henan Province; Changsha, Hunan Province; Xuzhou, Jiangsu Province; and Yanzhou, Shandong Province. It made nearly 2 million yuan by repackaging cheaper baby formula and milk powder for adults into containers bearing the labels of name brands, the newspaper said.

It is unclear why the CFDA waited several months to comment on the incident.

Wang Dingmian, head of the Guangzhou Dairy Business Association, said regulators should rethink how they are supervising the industry, which is still getting over the melamine scandal of 2008.

That episode involved dairy farmers spiking raw milk with a chemical called melamine, which made the milk appear to be rich in protein. The government later blamed the industrial chemical's presence in milk products for killing six babies and making an estimated 300,000 others sick.

Wang also said the authorities were irresponsible for withholding information about which brands were counterfeited, how long the ring was active and in how many places their products were sold.

This could further erode public trust in the domestic dairy industry, he warned.

The CFDA said in a new statement on April 6 that the American Abbott and domestic Beingmate brands were used by the counterfeiters. It also repeated its statement that the faked products still met safety standards, a move the regulator said was intended to prevent the public from panicking.

Lei Yongjun, the founder of a club for dairy company executives, said he doubted this safety assurance because the watchdog has not released any test results.

He also asked why regulators were so slow to respond to a crisis, and said the information it is providing is inconsistent.

"The CFDA earlier said that several brands might have been affected, but why has it only named Abbott and Beingmate?" he asked.

Abbott Laboratories Trading (Shanghai) Co. Ltd. said in a statement on social media on April 6 that it alerted Shanghai police about a small amount of counterfeit baby formula products sold in China. It did not say when it told police about this.

Abbott Laboratories Trading said the case was resolved in December, and all problematic products were recovered.

Beingmate also released a statement the same day to say that one of its formula products had been knocked off, but that the incident occurred before April 2015.

It launched an inspection of its own after the CFDA alerted it about problems, but found no suspicious products.