Among Millions Afflicted, Too Few to Treat 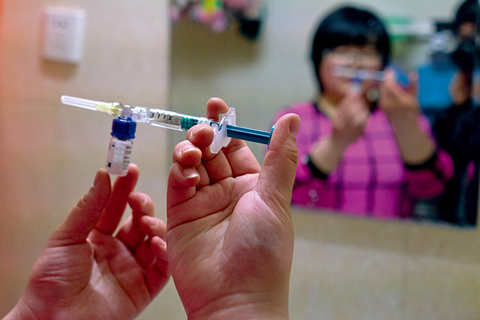 (Beijing) – Zhao Lei is one of China's estimated 19,000 multiple sclerosis (MS) patients now on edge over the future of a drug program that helps them cope with the incurable nervous system disorder.

The anxiety has been building since January, when the German drugmaker Bayer Pharma AG and the state-backed China Charity Federation suspended a four-year-old program that offered about 1,000 MS patients the Bayer product Betaferon at reduced prices.

Bayer announced on March 17 that following talks with patient groups and non-governmental organizations the company would continue Betaferon subsidies. The company said in an email to Caixin the next day that it would "make sure patients can continue receiving the medication"

Nevertheless, Zhao and other MS patients who spoke with Caixin said they fear the program's short suspension may have been the first step toward removing Betaferon from the Chinese market. The drug's exit would leave patients without a single imported drug to help them control MS symptoms so that they can lead relatively normal lives.

That feeling of uncertainty is shared by millions in the country who suffer from uncommon diseases that require expensive treatments, sometimes for life. Those with low incomes and limited insurance coverage wonder how long they'll be able to benefit from the nation's subsidized drug programs.

The public health insurance system does not cover "orphan drugs" for people with extremely rare diseases, and government financial support for other low-volume drugs such as Betaferon can be limited. The eastern city of Qingdao, for example, is the only local government that helps MS patients pay for medicine.

Domestic pharmaceutical companies are lightweight producers of drugs for uncommon diseases because they tend to avoid investing heavily in research for products with low profit potential. Moreover, the health care charity system is far less developed than in Western countries.

Nevertheless, the government says about 17 million people in the country suffer more than 5,700 uncommon diseases. A 2012 study by Renmin University and the NGO China-Dolls Center for Rare Disorders found that annual medical spending for each patient with a rare disease averaged 67,000 yuan.

Some 78 percent of all families with a patient suffering from a rare illness in the home received no outside financial support, the study found, and 63 percent could not afford full medical treatment.

Multinational pharmaceutical companies that produce medicines for people with uncommon ailments have helped low-income patients in the nation not only as a humanitarian gesture but also to build good relations with the government. In the long term, these firms hope to win a profitable share of the market.

But drug companies are not in the business of subsidizing their products for needy patients indefinitely. After sustaining losses for awhile, companies that support charitable programs in countries such as China "naturally consider withdrawing," said a source at the China branch of a French pharmaceutical company who asked not to be identified.

Moreover, the fact that the health care system does not support drug care for patients with MS and other less common diseases dampens pharmaceutical company interest in doing business in the country.

"Without public (health care) coverage, companies are hesitant about" bringing new drugs to the domestic market, said an executive at a foreign pharmaceutical company.

Betaferon is unaffordable for 27-year-old Zhao, who lives in the northern region of Inner Mongolia, and other MS patients on limited incomes. A single injection costs about 850 yuan, said Zhao, and a patient may need 15 or more injections per month.

Zhao was diagnosed with the disease six years ago and was receiving subsidized injections between 2014 and the program's suspension.

Under the program, low-income MS patients who paid for four months of the medication could receive eight months' worth of Betaferon injections for free.

"After I applied for the Bayer-China Charity Federation program, my annual personal spending was about 50,000 yuan," Zhao said. "That was affordable."

Besides Zhao, several other MS patients said they fear that if the subsidy program ends, Bayer might completely withdraw Betaferon from the country.

It would not be the first imported MS drug to leave the country. An alternative to Betaferon called Rebif, made by Germany's Merck Group, was sold in China between 2009 and 2013.

After being diagnosed with MS, Zhao said his doctor recommended treating the symptoms with imported drugs. At the time, Rebif was the most common drug available for the disease, but after it was pulled from shelves in the country, patients turned to Betaferon.

The injections have afforded Zhao some relief from the stiffness in his muscles that sometimes prevents him for walking or even speaking. Even patients who have reported only minor help from Betaferon have joined Zhao in urging that the drug subsidies continue.

"No matter how effective, we can't stop taking the medication," said one patient who asked to remain anonymous.

The China Charity Federation says Bayer covered the costs of 152 million yuan worth of Betaferon distributed among patients from 2012 to last December. In addition, the federation said, the drug company paid it about 900,000 yuan annually to supervise the subsidy program.

But the company's 2013 revenues from the drug in the country totaled only about 10 million yuan, the company said. Bayer's sales of Betaferon have been shrinking globally in the face of competition from rival medicines. The company reported worldwide Betaferon sales totaled 824 million euros last year, down 21 percent from 2013, on total company revenues of 46 billion euros.

Bayer apparently started cutting back on Betaferon-related spending in the country in 2014.

One 22-year-old MS patient in Beijing said she started taking the medication in early 2014, but within a few months, supplies through her doctor had dried up.

Other patients said they have not been able to buy Betaferon since early 2015. A drug saleswoman said her company stopped selling it in February last year, adding that many of the country's MS patients have not been receiving the right medications because their diseases were not properly diagnosed or they cannot afford the drugs.

It's unclear how quickly MS patients might receive new treatment options if Betaferon follows Rebif out the door. That's because every new drug proposed for the market must first undergo a complex government review and approval process.

"Drugs that have been sold in U.S. and Europe for many years must still be approved in China," said the executive at the foreign pharmaceutical firm. He said a single drug's review process can take up to five years, even though in many countries an "orphan drug" can be reviewed and approved in less than 10 months.

"It takes a great deal of time and administrative effort, and adds nearly 10 million yuan in extra costs" for each drug submitted for approval to authorities, the executive said.

The CFDA requires at least 200 clinical tests on 200 separate patients before a drug can be approved for sale, which the company manager said can be difficult if the product is a new orphan drug for a disease that afflicts a relatively few people.

Some experts have urged the government to do more to help patients with uncommon diseases get the medications they need.

"Policymakers should treat any disease, no matter how rare or common, equally," Ding said.