Gov't Says It Wants China to Be Soccer Giant by 2050 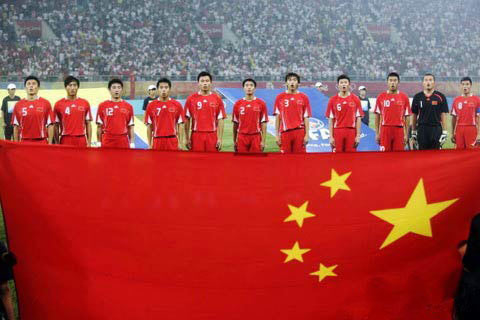 (Beijing) – The central government has unveiled plans for developing China into an international soccer powerhouse by 2050.

The plan published on April 11 was drawn up by an inter-ministry office under the cabinet, the National Development and Reform Commission and two other central government agencies, and contains both medium- and long-term goals.

Under the plans, the government wants the men's team to develop into a top Asian squad by 2030 and for the women's team to become a world-class side by that year.

"We'll make all-out efforts to reach the goal of developing China into a top-tier soccer power between 2031 and 2050 to realize the Chinese people's soccer dream and to make our due contributions to the sport," the government said in the document.

The country's leaders, including President Xi Jinping and former paramount leader Deng Xiaoping (1904-97), made it known they liked the game and wanted to see China become a soccer power.

China's soccer dreams have been troubled by scandals involving match-fixing and bribery. Its teams have also suffered crushing defeats in their quests for a berth in the World Cup finals over the past decade.

The men's team was No. 81 in the world in a ranking released by International Federation of Football Association, also known as FIFA, on April 7, 15 places higher than the rankings from late March. The rise was aided by a 2-0 victory over Qatar in a 2018 World Cup qualifying match, a victory that helped the squad narrowly avoid elimination.

The central government admitted in the document that the sport in China has been bedeviled by bureaucracy and problems with supervision, talent cultivation and organization.

To address those issues, the government said it would overhaul the China Football Association, the country's soccer governing body.

It also said that authorities would push soccer teams in the country's top league to list on stock exchanges. The government's plans also call for two or three clubs from the Chinese Super League to be ranked among the top teams in the Asia in the next five years.

Soccer clubs and schools are also to be granted preferential policies regarding land use and taxes.

The government said it wants 20,000 schools to specialize in soccer training in the next five years and for 70,000 fields to be available nationwide by the end of 2020 – about five to seven for every 100,000 people.