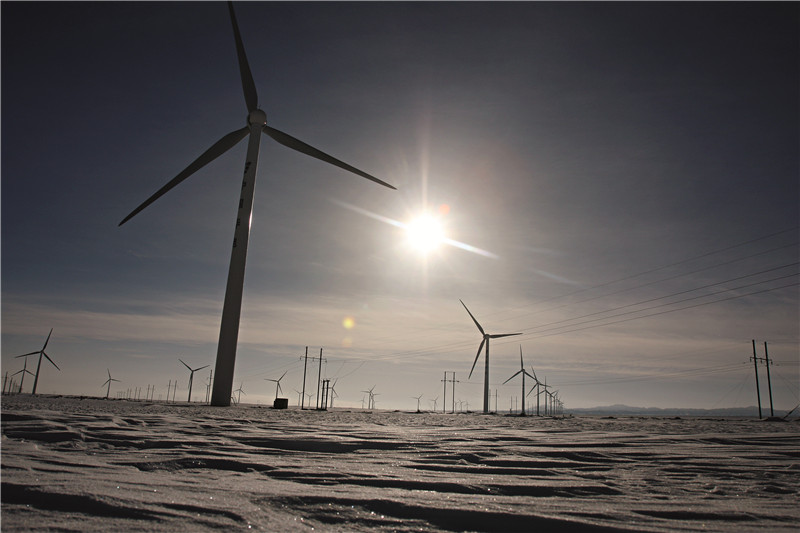 (Beijing) – Local governments are undermining the central government's efforts to develop greener sources of electricity by squeezing production quotas for renewables and slapping extra levies on wind companies to prop up ailing coal-fired power plants in their regions.

Governments in the northwestern provinces of Gansu and Xinjiang and in the southwestern province of Yunnan subsidized coal-burning plants and intervened wind power company productions, forcing some wind farms to take almost 60 percent of their turbines offline, the Chinese Wind Energy Association (CWEA), an industry body, said.

Wind power capacity has been growing, but so has the amount of wasted wind energy, data from the National Energy Administration (NEA) show. About 26 percent of turbines in the country didn't produce any power in the first three months of 2016, statistics showed. In 2015, about 15 percent of the installed wind power generation capacity sat idling, the data showed, and it was the lowest level of utilization since 2012. Despite this, in 2015, new turbines that can produce 33 million kilowatts of electricity per year were installed, pushing up the country's total wind power generation capacity to 129 million kilowatts per year.

China has the largest wind energy production capacity in the world, the NEA data showed.

In previous years, a glut of wind turbines had pushed some to sit idle. The lack of a smart grid that can deal with fluctuating levels of output from renewable sources has also resulted in wasted wind, hydro and solar energy.

Local governments and grid companies assign annual power production quotas to different types of power companies based on forecasts for demand and stability of supplies. Power producers are seeing weakening demand due to the economic slowdown.

Since 2015, the problem of idling wind turbines has worsened partly because local governments assign coal plants enough production targets to survive at the expense of ones using renewable sources, said Qin Haiyan, secretary general of the CWEA.

Coal plants have long been the easiest, fastest way for some provinces to stimulate local economic growth and create jobs.

More than 12 percent of solar power generation facilities nationwide were forced offline in 2015. Solar plants in Gansu Province were the worst affected, with almost one-third of the capacity left unused, followed by Xinjiang with one-quarter of facilities unplugged, data from the NEA showed.

Local government support for coal over renewables raises questions about whether the country is weaning itself from its addiction to the cheap but dirty source of energy as quickly as it can, experts said.

"Some local governments have adopted policies that interrupt the development of renewable energy sources," said Qin.

In December, authorities in Xinjiang squeezed production quotas of wind, solar and hydro power producers; levied an extra fee on them; and used the revenue to subsidize coal-fired power plants, the CWEA said. The Gansu government cut the price paid by the state-run operator of the local grid when buying 1 watt of electricity from a wind power generator by 40 to 75 percent. In November authorities in Yunnan tried to slap an extra surcharge on wind and hydro power producers and use the revenue to subsidize underperforming coal-fired plants.

The plan, however, was suspended due to strong opposition from renewable energy firms, Qin said, but these policies meant wind farms that produced more energy lost more money.

Producers in Gansu were the worst affected and had to let 40 percent of their turbines sit idle last year, almost four times the capacity wasted in 2014, the CWEA said. Shenzhen-listed Ningxia Yingxing Energy Co., which has most of its wind farms in Gansu, said in a filing to the stock exchange that it lost 120 million yuan in 2015 due to lower energy demand and production quotas.

On March 31, the CWEA accused the governments of Gansu, Xinjiang and Yunnan of adopting policies that violated the country's Renewable Energy Law.

The association has lodged complaints with government departments in these provinces, demanding more transparency of policies governing the wind power sector and asking to lift production curbs.

Squeezing production quotas and slapping extra charges on producers of renewables to cross-subsidize coal plants is a violation of the spirit of the law, the CWEA said.

Coal-fired plants have been struggling in recent years. In Yunnan, only one in 10 facilities using coal operated at full capacity in 2015, said Wang Zhixuan, head of China Electricity Council, a government-backed power industry association.

The country's total electricity consumption rose 0.5 percent in 2015 to 5.6 trillion kWh, official data show. The figure in 2014 was about 4 percent.

The increase in permit approvals followed the enactment of a policy in March that allows provincial environmental officials rather than the central Ministry of Environmental Protection to approve projects to cut red tape.

That system has created what appears to be a disconnect between achieving provincial economic growth targets and the country's overall energy requirements. The nation is already plagued by a glut of coal power plants. If all the approved plants come online, it would lead to excess capacity of over 200 gigawatts per year by 2020, said Yuan Jiahai, a professor at North China Electric Power University in Beijing, and it is a waste of 700 billion yuan worth of investment.

Producers of renewables say the increase in the number of coal plants hinders other energy sources from selling electricity on the grid and attracting investment.

Although coal is the cheapest source of energy in the country, the price gap between the fossil fuel and renewables is narrowing. It cost 0.3 yuan to generate one kWh using coal in 2014, compared to 0.6 yuan per kWh with wind and 0.9 yuan using solar power, said Meng Xiangan, vice chairman of the China Renewable Energy Society, a research institution in Beijing.

But if a pollution tax or a carbon tax is imposed on producers that use fossil fuels, the cost of burning coal for electricity will rise significantly, said Meng.

The World Wildlife Fund, an environmental NGO, predicted that by 2020 coal power generation costs in the country will rise to 0.85 yuan per kWh, while that for wind and solar energy will reduce to 0.51 yuan and 0.62 yuan per kWh as technology improves.

As part of the Paris Agreement on climate change signed on April 22, China pledged that by 2020, 15 percent of all its energy will come from sources other than fossil fuels. A long-term goal set by the National Development and Reform Commission, the country's top economic planner, in 2014 is raising the amount of energy produced from non-fossil fuel sources to 91 percent by 2050.

In March, the commission and NEA issued a series of guidelines to assist the development of renewables, including specific growth targets for each region and requirements for local governments to increase renewable energy consumption.

If existing national-level policies are implemented, renewable energy companies will be able to make enough money to support their growth, said Meng.

But if the local governments' appetite for coal is not reduced, plans to limit the country's reliance on dirty sources of energy and develop greener alternatives will fail to take off, said Yuan.