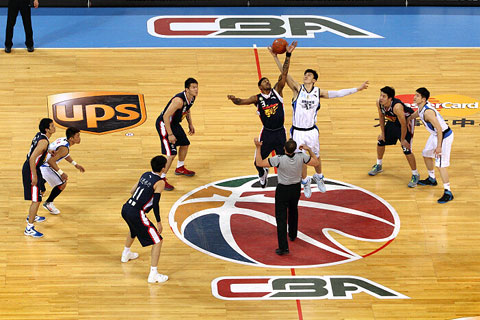 The former Houston Rockets center, who hung up his high tops in 2011, is trying to reshape the state-controlled China Basketball Association (CBA), which runs a 20-team league with a commercial value estimated at just 3 percent that of the NBA.

Yao wants a more market-oriented, NBA-style league backed by private team owners rather than the government. And sharing his opinion is the cabinet, the State Council, which in 2014 said market forces should play a larger role in CBA affairs.

In January, it looked like Yao had scored a big basket when the General Administration of Sports (GAS) – which oversees all athletics activities in the country including professional team sports – ordered the CBA to work alongside team owners to form a business operations joint venture.

The venture, which was initially expected to launch this year, would take over all business, development, game and marketing operations now handled by the CBA's government-run Market Development Center. Its main goal would be to boost the CBA's commercial value.

Unfortunately for Yao, though, the decision to form the joint venture may have undermined a reform plan he helped hammer out just two days earlier.

Yao and the owners of 17 other teams had drafted a plan challenging the CBA's leadership by forming the new China Professional Basketball Club United Inc. (BCU) and named Yao its CEO. The 18 team owners hold equal stakes in the club, which was licensed as a business with 45 million yuan in registered capital.

Team owners hoped to use the club as a springboard for gaining more influence over what are now CBA-controlled business operations and game management. They also apparently had an eye on next year's expiration of a 2005 media rights, broadcasting and business development contract between the league and the Chinese subsidiary of the Swedish sports marketing company Infront Sports & Media.

BCU board member Yuan Chao, deputy general manager of the Beijing Ducks basketball team, said the team owners want to "take over CBA's marketing role" since "sooner or later, the CBA will have to hand over its business operations power."

But the sports administration's decision threw a wrench in the Yao-led plan for more team-owner clout. And shortly after the decision for a joint venture was announced, CBA officials added a painful twist by declaring they would control 30 percent of the new venture, and that each of the league's team owners would hold just 3.5 percent.

Yao hasn't thrown in the towel. In the course of three negotiating sessions with the director of the CBA league office, Zhang Xiong, and other league officials in April, he proposed giving the BCU a 63 percent stake in the new joint venture as the sole representative of 18 teams.

CBA officials shot down Yao's plan, though, arguing the government must retain control over the basketball league's business operations.

BCU negotiators rejected the CBA's proposals on grounds that neither would give team owners a large enough role in the pro basketball business.

Yao called the CBA plan unacceptable. "It's like repackaging our current system as a private company," he lamented.

As of early May, no new talks had been scheduled.

Yao told Caixin that in the spirit of a nationwide campaign to introduce market reforms, the CBA should not control the largest stake in the planned joint venture. Instead, he said, the system should change now, while the CBA and Infront are renegotiating the media contract that expires in March 2017.

"If we miss this chance, it will be difficult for us to get another one," Yao said.

Several team managers said they're displeased with a lack of financial transparency linked to the CBA-Infront contract. Yan Xiaoming, a former deputy general manager of the CBA's Liaoning Flying Leopards said the contract lets Infront pocket nearly 500 million yuan a year, or as much as 70 percent of all revenue collected by CBA teams. The CBA, through its revenue redistribution system, hands each team only 13 million yuan a year toward costs including player salaries, Yan said.

Sources who asked not to be identified said the CBA has gotten more than 100 million yuan in each of the past three years through its contract with Infront.

Under the current financing system, team owners function as middlemen by funneling ticket revenues into the league's coffers. The league's management office, after paying Infront and taking a cut, redistributes the funds to teams. The owners have little room to plot their own business strategies.

There is a huge gap between the amount the CBA redistributes to teams and annual team expenditures. Yan estimated each team's costs exceed 40 million yuan a year – three times what they get from the league. The difference is often covered by team owners, who raise money mainly by selling sponsorships.

Ma Guoli, a former chairman of Infront's China division, said that under the contract with the CBA Infront is not obligated to publish its financials or share information with team owners. He acknowledged that company revenues have been climbing in recent years, but said the amount the firm received was justified in light of Infront's investments in the contract's early years.

Officials who run the 22-year-old CBA and the pro basketball supervision system have been criticized for a rigid management style. Critics say their approach prevents the few hundred games played each season from reaching their potential for popularity and severely limits team revenues, which in turn hurts team owners and players.

Many complain that the CBA and sports administration are mainly interested in promoting athletes on the global stage. It's their job to find the best players and sporting resources for national teams that compete in international events such as the Olympics, said a source close to the CBA who declined to be named. Issues related to pro sports for Chinese fans are far less important.

CBA player salaries reflect the government's as well as the public's general indifference toward domestic pro basketball in China, where the hugely popular NBA games are regularly broadcast on state-run television. According to domestic media, players make about 500,000 yuan a year – far less than the US$ 10 million that the Rockets paid Yao annually from 2002 to 2010.

A 2015 report by the Chinese Academy of Social Sciences noted that more than 1,200 games are played during a typical NBA season, compared with only 400 for the CBA. Moreover, the NBA's commercial value is more than 30 times that of the CBA.

Efforts to boost CBA teams by letting owners run proper business operations can be traced to 1998, when seven teams tried to form a BCU-like club beyond the CBA's reach. CBA officials, however, blocked the effort.

In 2004, a plan to reform CBA league operations within 10 years was approved by the association's then director Li Yuanwei. The plan died when Li retired in 2009, but was revived in spirit with the State Council's reform call in 2014 and sports officials' decision to implement the joint venture system.

The owners of two teams are apparently happy with the current arrangement. Their contentment prompted the owners of the Zhejiang Golden Bulls and Shanxi Brave Dragons to decline Yao's invitation to join the BCU.

Fang Jun, the Zhejiang team's general manager, said he doubts the BCU can succeed as a business. Moreover, he fears small teams such as his would be at a disadvantage in a club with the Sharks and other big-city powerhouses.

Fang is also worried that the government might lose money if pro basketball business operations were transferred to the BCU.

Some pro sports industry watchers think other team owners might switch to Fang's side after abandoning Yao's initiative.

One industry expert who asked not to be named said that some BCU members may bail out if club-CBA relations worsen. "Everyone wants reform," said a BCU member, "but no one wants to confront the CBA."

The former Infront executive Ma can't imagine a pro basketball league in China that isn't controlled by the CBA.

"The NBA has been established in a fully market-oriented society," he said. "But in China, the leagues do not follow pure market behavior. It's impossible to get rid of the CBA."

Unless the system changes, however, Yao and other team owners themselves may have to continue paying a heavy price for pro basketball in the country. A source close to the Shanghai Sharks said it loses about 20 million yuan a year. It was losing money when Yao, who once played on the squad, bought it in 2009.

Zhang Dazhong, CEO of the Alibaba's sports division, said the dispute between the owners and the CBA is about "whether the CBA's operations should be market-oriented or whether it should maintain administrative powers." But in his opinion, business reforms for professional sports should be led by companies and market forces.

"There is no difference between sporting and other industries," Zhang said. "They all have to follow market rules."