Regulators Hit the Brakes on Speculation in Futures Markets 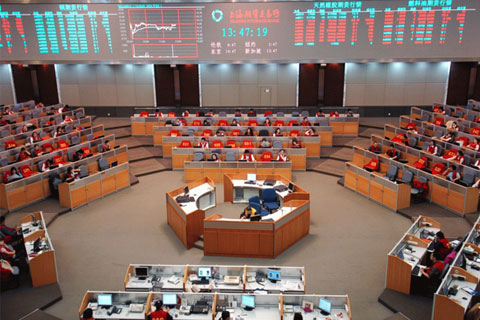 (Beijing) – Officials governing futures markets are trying to cool a speculative fervor that has pushed up prices and trading volumes for raw materials and agricultural products in recent months.

The price of futures contracts for items including coking coal, steel and even eggs have risen since the beginning of the year. Between January 4 and April 26, the price of coking coal contracts increased by two-thirds, data from futures exchanges show, and the number of contracts traded rose from 106,000 to 2.42 million.

Price indexes of steel rebar, the rods used to reinforce concrete, and iron ore went up by over 40 percent during the same period.

An increase in speculation in futures markets in China "poses multiple dangers to global commodity pricing stability," a recent report from Citigroup said.

The froth in the commodities markets is being caused by retail investors flocking into it after the stock market rout last summer, experts said, and because the bond market has been rattled by an increase in the risk of defaults.

"In the past, fewer than 20 investors opened futures accounts every month, but now it has more than doubled to about 50 per month," the manager of a futures brokerage said.

Most of the newcomers are retail investors, the manager said.

Investors hunting for short-term gains have pumped up commodity prices quickly. The volume of iron ore traded on the Dalian exchange rose more than 400 percent from January to late April compared to the same period in 2015, a report by the investment bank Goldman Sachs said.

On some days, trading volume of iron ore futures exceeded the total amount of iron ore that China imported in 2015, the investment bank said.

On March 10, 10.5 million iron contracts were traded, which meant the quantity of the metal traded on paper on that day exceeded 1 billion tons, more than the imports for all of last year. Daily volumes for iron futures in 2015 ranged from 150,000 to 5 million contracts, according to Reuters.

"The problem in the futures market is that traders looking for quick gains have outnumbered producers or miners who use it to hedge long-term risks caused by price fluctuations," said a source close to the China Securities Regulatory Commission. "Too much speculation could turn the market in to a gambling den."

An investor held onto an iron ore contract or a steel rebar future traded on the Shanghai exchange for just four hours on average, said Wu Zhili, an analyst at Shenhua Futures Brokerage Co. Ltd., while investors in the New York Mercantile Exchange held contracts for 40 to 70 hours on average.

And there are signs the system is having trouble handling all the action. The Shanghai Futures Exchange went offline for a few minutes when trading began on April 22 because its computers could not handle the transaction volume, the exchange said.

Banks looking for better yields are pouring money from their wealth management products in to commodities, a bank executive said.

Investment fund managers are also eyeing the futures market. Four mutual funds are waiting for permission from the regulator to invest in copper, non-ferrous metals and agricultural goods contracts, the CSRC said.

Almost all mutual funds in the country invest in stock or bond markets, said Gao Shang, head of research at Haitong Futures Co. Ltd. The only one trading in futures was set up in August by UBS SDIC, a joint venture between the Swiss financial services company UBS AG and SDIC Trust Co. Ltd. in Shanghai. The 347 million yuan fund invests in silver contracts, the company said, and the fund only saw a 0.006 percent rise in value over the past seven months.

Exchanges in Dalian, Shanghai and the central city of Zhengzhou moved quickly to curb excessive speculation, and prices have begun to moderate. Dalian increased transactions fees on coking coal contracts 11 times to 0.072 percent from April 22 to April 27 "to restrain excessive, short-term speculative transactions … and to maintain market stability," the exchange said.

The margin trading requirement for iron ore contracts, a akin to a deposit the investors must pay, was raised to 8 percent from 7 percent. Previously, the exchange pushed up transaction costs for items including polyethylene and soybeans.

The Shanghai exchange increased transactions fees for steel rebar to 0.01 percent from 0.006 percent on April 25, and also cut night trading hours for contracts of rebar, hot-rolled coil steel and petroleum pitch by two hours from four hours, starting from May 3.

These interventions have helped keep speculators at bay. On April 27, the prices of coking coal and iron ore fell by more than 5 percent on the exchange in Dalian, in the northeast. The total volume of contracts traded dropped to 1.9 million on April 29 from 10.5 million on March 10.

Several analysts said that regulators may take tougher steps to prevent a bubble. Others warned exchanges should be prudent when intervening to avoid the kind of turmoil caused when a circuit breaker mechanism was introduced to the stock market in January that would halt trading if the bourse fell by certain levels. It aimed to limit stock market losses, but instead triggered a wave of panic selling.

Policymakers "should learn from the stock market debacle," said Gao, and manage market liquidity levels and avoid sudden policy changes that may trigger a meltdown.

Others said there was no reason for alarm. One cannot say the market is overheated by only looking at an increase in transaction volumes, said Zhu Shiwei, a metals analyst of Yongan Futures Broker Co. Ltd.

The price gap between forward contracts and the spot market should also be considered. If the contract price was not significantly above the spot price, a rise in transaction volumes may be a sign that the commodities market is recovering after a slump in recent years, Zhu said.