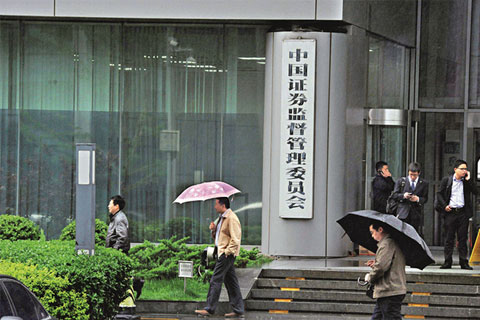 The four fields were singled out because they were viewed as not closely related to the so-called real economy, which is broadly defined as industries that produces tangible products and services, the source and an investment banker with knowledge of the matter said.

The CSRC has also stopped approving refinancing and merger and acquisition plans involving firms in these fields, the source said.

The regulator is primarily worried that listed firms will take advantage of investor enthusiasm in video games, movie making and virtual reality technologies, which have shown signs of overheating, the person close to the CSRC said. Investment in the Internet finance industry was also discouraged because of a surge in fraud.

"If a company that does not do its main business right branches out into an unrelated field, it is often just to create hype," he said. Letting this happen would mean "continuing to inflate bubbles and ultimately hurt investor interests."

The regulator has no problem with companies diversifying their portfolio as long as it remains in the real economy, he said. So for example, a cement factory would be allowed to sell extra stock if it planned to use the money to manufacture clean energy equipment, but not so if it wanted to buy a video game producer.

"Valuations in those fields have shown signs of big bubbles," partly due to a lack of commonly accepted valuation standards, he said.

One recent example involved Shenzhen-listed Zhejiang Talent Television & Film Co., which suspended the trading of its shares on March 28 due to a pending "major asset restructuring." According to a filing it submitted to the Shenzhen bourse this referred to its proposal to buy 51 percent of Ai Mei Shen, a two-month-old media firm with 3 million yuan in registered capital owned by film celebrity Fan Bingbing.

Zhejiang Talent Television & Film did not say how much it was paying for the deal, but rules for suspending trading suggest the price tag was more than 400 million yuan. The implied valuation for Ai Mei Shen would then be at least 870 million yuan.

These figures raised eyebrows among investors and regulators. On April 11, the Shenzhen stock exchange required Zhejiang Talent Television & Film to provide further information on the proposed takeover, on the grounds that the valuation of Ai Mei Shen was out of the ordinary.

This showed the CSRC was more concerned about risk than usual because it was rare for the bourse to make such an inquiry before receiving the company's investment plan, the investment banker said.