COSCO Subsidiary Gets One-Third of Container Terminal Firm in Netherlands 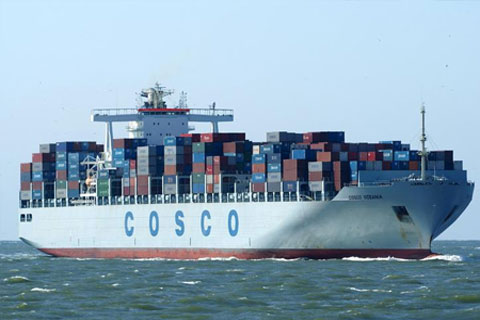 (Shanghai) – A subsidiary of state-owned China COSCO Shipping Corp. Ltd. has paid some 930 million yuan to acquire over one-third of a container terminal operator in the Netherlands in its latest push to expand overseas.

COSCO Pacific Ltd. said in a statement on May 11 that it had reached a deal with ECT Participations B.V. to buy 35 percent of Euromax Terminal Rotterdam BV for 125 million euros.

ECT Participations B.V. is a subsidiary of Hutchison Port Holdings Ltd., which is controlled by Hong Kong tycoon Li Ka-shing.

The acquisition has increased the stake that COSCO Pacific, the container-terminal operator of China COSCO Shipping, holds in Euromax Terminal Rotterdam up to 47.5 percent, making it the largest shareholder in the company.

A consortium formed by COSCO Pacific, China's Yang Ming Group, the Japanese firm Kawasaki Kisen Kaisha Ltd. and Hanjin Shipping Co. Ltd. of South Korea bought a stake of 49 percent in the terminal operator in 2007. COSCO Pacific owned 12.5 percent of the operator at the time.

The port in Rotterdam where the Euromax terminal is located has become a major European shipping hub since opening in 2010. The container terminal saw its handling capacity jump to 3.2 million 20-foot containers by the end of 2015, COSCO Pacific said in the statement.

China COSCO Shipping, the country's largest shipping firm, said the deal with Hutchison Port Holdings helps it seize an opportunity that opened due to the Chinese government's "belt and road" initiative to expand China's business ties through Central Asia, Southeast Asia and Africa to Europe.

The deal will also help consolidate Rotterdam's status as a gateway for Chinese merchants entering Europe.

COSCO Pacific said that the port in Rotterdam is gaining more prominence as a major shipping hub in Europe and that its parent will boost the number of super-sized ships it operates.

COSCO Pacific has been on a shopping spree in recent years. In April, it said it would pay 369 million euros for two-thirds of Piraeus, the largest port in Greece.