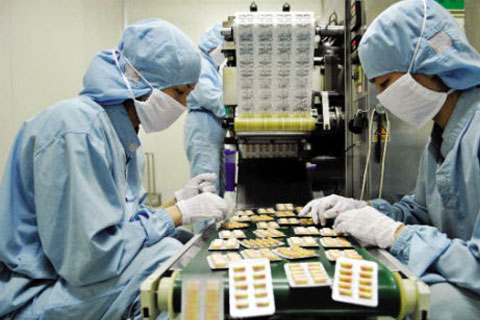 (Beijing) – China's latest round of health care market controls could be a bitter pill for multinational pharmaceutical companies that now, after years of what some call easy profits, are adapting to a tougher business climate.

The National Health and Family Planning Commission is demanding that multinationals cut prices on five types of drugs used for treating major ailments including cancer. Negotiations between the two sides, which started late last year, could reduce prices for these drugs by more than half, the commission says.

Since the second half 2015, some provincial governments such as Hunan and Zhejiang set limits on the amount of money that public hospitals could spend on drugs made by multinationals.

And a policy implemented last year by the National Development and Reform Commission (NDRC) adjusted the pharmaceutical products pricing regime for hospitals in ways designed to put mainly multinational-produced brand-name drugs and generic varieties manufactured by domestic companies on an equal footing.

Authorities say these and other recent decisions are aimed at reducing health care costs for consumers and making it easier for domestic drug firms to compete against the giant multinationals that dominate the market.

Multinational influence in the country has been growing for more than a decade thanks to patent protection for the medicines they produce and rising demand for brand-name drugs among consumers.

Medical experts have estimated that about 20 multinationals including GlaxoSmithKline (GSK), Pfizer, Novartis and Bayer accounted for about half of all drug sales in China, which the U.S. research institute IMS Institute for Healthcare Informatics said totaled US$ 115 billion last year. An estimated 6,000 domestic companies account for the rest of the market, experts said.

Government policy adjustments as well as the slowing economy are having an impact on multinational drug company financials.

But the China market is too big – and future growth forecasts too compelling – for multinationals to pull away. London-based industry information provider Global Data said that by 2020 the nation's drug market is expected to be worth US$ 315 billion, up from US$ 48 billion in 2012.

Foreign drug makers are thus adapting to stay in the game, even if it means accepting a smaller market share and fewer profits.

Some multinationals have cut their workforces in the country. Others have lowered drug prices or expanded into over-the-counter (OTC) medicines. Still others have bowed out of certain market segments by refusing to bid for hospital contracts.

GSK is one of several multinationals apparently on a price-cutting trajectory. The British firm is among those negotiating prices with health commission, according to a GSK source who wants to remain anonymous. The government has declined to name the companies and drugs targeted by the talks, which were expected to conclude by late May.

Ji Haiwei, a Shanghai-based vice president for GSK, said competition from domestically made generics will force his company to charge consumers less. And it's already happening: Since last summer, GSK has slashed prices for its hepatitis B treatments by up to 30 percent.

"I'm sure in the next two to three years, our brand-name drugs will be under a lot of pressure to compete with domestic generic drugs," Ji said. "You will see significant price cuts for brand-name drugs."

New limits on brand-name drug purchases by hospitals in some parts of the country are also forcing multinationals to reconsider their price strategies.

Research by Shi Luwen, a pharmacology professor at Peking University, found that about one-third of the imported brand-name drugs sold in the nation are more expensive than in other parts of the world. Before the sales limits were imposed, Shi said, hospitals were channels for about 230 types of brand-name drugs, mainly produced by multinationals.

Some multinationals responded to the limits by cutting prices or revamping their business strategies.

"Many foreign pharmaceutical companies set up special teams this year to handle local hospital bidding in hopes of improving sales through lower prices," explained a foreign company executive who asked not to be named, adding that his firm is still bidding for contracts but has slashed bid offers by half.

Some multinationals have downsized their operations in the country. Bristol-Myers Squibb says it has cut its sales team by about 1,000 since July 2014, while Novartis said in November that it had eliminated 130 positions. In connection with a bribery scandal in 2013, senior managers were among the 110 employees in China that GSK fired last year.

Multinationals are also adapting to the new climate by tapping burgeoning demand for OTC drugs, whose sales rose to 200 billion yuan in 2015 from 190 billion the year before, according to market data information provider China Industry Research.

Shi Licheng, director of the Dingchen Pharmaceutical Management Consulting Center in Beijing, said that in recent years multinationals including Pfizer, GSK and Merck have invested in the nation's OTC sector by acquiring domestic companies and building new drug-making facilities. They see the OTC business as a remedy for the slowdown in prescription drug sales triggered by government policy changes.

Other recent adjustments for foreign pharmaceutical firms have revolved around spinning off non-core businesses and giving more attention to markets in small cities where health care systems would benefit from a recent government decision to spend more on health care outside major cities.

But strategic adjustments aren't a cure-all. Business conditions early this year forced Novartis to halt all marketing for some anti-osteoporosis drugs in the country. And in March, AstraZeneca cut back by letting two Chinese companies each buy the rights to sell one of its most popular drugs.

The nation's pharmaceutical industry in 2015 saw a 9 percent increase in revenues to more than US$ 410 billion year-on-year, the China Pharmaceutical Industry Association reported. But the rise was down from the 13 percent growth posted in 2014.

The foreign executive said in some cases the slowing economy is leaving multinationals with no choice but to pull back. "As the economy slows and the pharmaceutical market weakens, foreign drug makers have to focus on their most competitive businesses to maintain competitiveness," said the executive.

Also threatening foreign pharmaceutical companies is the so-called "patent cliff," a term used to describe any sharp decline in a firm's revenues that happens after expiration of patent rights for a profitable drug. Once a patent has expired, other companies can produce and sell their own versions of that drug, usually for less than the original.

Worldwide, according to a senior foreign drug company executive who asked to remain anonymous, some 631 drug patents were slated to expire from 2012 to this year, including patents on 18 of the world's 20 best-selling prescription drugs that generate a combined US$ 142 billion globally every year.

Another executive at a foreign drug company said patent expirations could cause sales of a drug to fall by three-quarters in many countries.

Shi's research found some 70 types of drugs protected by patents were among the 230 brand-name products dispensed by Chinese hospitals. Patents for the rest previously expired.

Before the NDRC's rule changed last year, multinationals found hospitals eager to buy imported drugs because hospitals and doctors could mark up prices for patients and pocket the difference. Now, pricing policy changes and stricter supervision will give more advantage to cheaper, generic drugs.

Ma Xiaowei, deputy director of health commission, said the government is also offering foreign drug companies access to the public health insurance system. Under the proposal, he said, insured patients who buy their drugs could be reimbursed.

Zhao said foreign brand-name medicines covered by the health system would be more affordable to patients and could boost multinational sales.

Despite the challenges of policy adjustments and a market slowdown, most foreign pharmaceutical companies are banking on China. A foreign drug company executive who decline to be identified said even the threat of competition from domestic generics won't scare off multinationals entirely.

"China's domestic generic drugs are not competitive enough to challenge brand-name drugs and drag down the market prices," the executive said.

And in an interview with Caixin, an upbeat Novartis CEO Joseph Jimenez said he expects the pharmaceutical market to continue growing over the next five years.