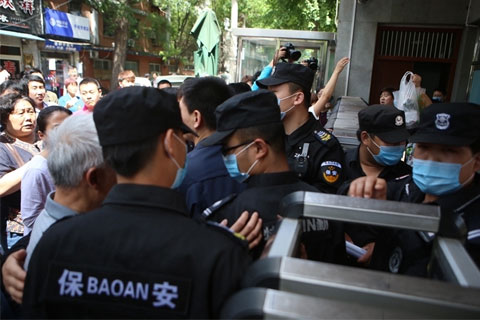 (Beijing) - The death of a university student who had complained about an expensive cancer treatment he received at a military hospital in Beijing has raised concerns about medical facilities exploiting legal loopholes to offer experimental treatments that have not been adequately tested in a bid to fatten their bottom lines.

When a doctor at the Second Hospital of the Beijing Armed Police Corps told them about a new immunotherapy that can control their son's cancer in September 2014, the parents of Wei Zexi said they felt they had a new ray of hope.

"A senior physician told my parents that they offer the treatment together with Stanford University, which developed the technology," Wei wrote in an article posted online on zhihu.com on February 26.

The doctor claimed the treatment had an 80 to 90 percent chance of being effective, the 21-year-old student suffering from a rare cancer, wrote. "He even promised my parents that I could live for at least another 20 years."

Wei, a college student from Xianyang in northwestern province of Shaanxi, was diagnosed with sarcoma, a cancer in the connective tissues that support internal organs, in April 2014. His parents were looking for alternative therapies after four rounds of radiation treatment and 25 sessions of chemotherapy, which he received from May to August 2014, failed to improve his condition.

After the promising discussion with doctors, Wei underwent four rounds of a treatment called "DC-CIK biological immune therapy" at the military hospital from September 2014 to February 2015. The treatment cost 200,000 yuan, and Wei's parents said they had used up all their savings to pay for it.

However, his condition deteriorated, forcing him to switch to radiation treatment and chemotherapy, he wrote. Wei said he learned about the therapy from search engine Baidu and complained that he felt the Internet giant had misled him.

Wei died on April 12, according to a public statement released by the family on May 1. It is not clear whether the immunotherapy worsened his illness.

The government launched two separate inquiries into the hospital and the search company Baidu Inc. after the death.

The hospital had made several false claims, a Caixin investigation found. Stanford University in California said it was not working with the military hospital. "Stanford has no relationship to this case or with the hospital," said Becky Bach from the Office of Communications and Public Affairs at Stanford's School of Medicine in a response to a Caixin inquiry.

The therapy involves extracting dendritic and lymph cells either from a patient or a donor, culturing them, and implanting them in the patient to boost the immune system to enable it to fight cancer cells.

Only a few therapies using this technique have been approved for clinic treatment in the United States because most trials have failed to prove its effectiveness, said Dr. He Ting who specializes in tumor biology research at Tsinghua University in Beijing.

The pharmaceutical company that developed the technique to treat late-stage prostate cancer was approved by the Food and Drug Administration in the United States in 2008, said He, but the company filed for bankruptcy in November 2014 because the treatment was too expensive and did not show results as expected.

The hospital had advertised the therapy online as "the world's most advanced cancer treatment" and it topped the search results for immunotherapy on Baidu, Wei's parents said.

Baidu came under fire earlier this year for selling bulletin boards used by sufferers of specific diseases to companies that allegedly promoted shoddy services. The Cyberspace Administration of China, the government body that supervises the country's Internet, said in a statement on its website on May 9 that Baidu "cannot rank search results merely based on the amount of money" that the company's customers pay, after its investigation.

It is not clear how much the search company charged hospitals to let them appear on top of their search result ranking system. Baidu said in a statement issued on May 1 that the company regrets Wei's death and that it will cooperate with the investigation.

Wei did not intend to target any institution or individual when he posted his experience online, his parents said. "He only wanted the public to know that the immunotherapy did not work on him," they said, and Wei had received nearly 4,000 emails from patients asking about the treatment.

Nearly 150 hospitals around the country offer therapies using this technique or variants of it, a 2013 survey by China Medicinal Biotech Association, a non-governmental industry body, show. Over 5,400 patients opted for these cures in 2013 alone, it found.

The association warned in a report that hospitals were offering this expensive treatment, even though there were no authoritative clinical trials in China to prove its effectiveness, to fatten their bottom lines.

A doctor working at a major hospital in the northern province of Hebei told Caixin that the medical facility started offering similar immunotherapies in 2009 as an experimental treatment for cancer patients when chemotherapy or radiation had failed. The hospital did not conduct any clinic trials before introducing the cure, the doctor said, but the therapy was widely promoted as an advanced treatment for patients suffering from different types of late-stage cancers because it bought additional revenue to the hospital.

"It does not necessarily save or ruin lives but it's really a cash cow," said the doctor who asked not to be named.

The lack of laws to govern medical research, clinic trials and the development of new treatments has led to the spread of irregularities in the health sector, experts said.

Universities, research institutions and hospitals in China only need the approval from their in-house ethical committees to start medical research projects or clinical trials, a biologist who asked not to be named told Caixin, and this leave room for possible abuses.

The military hospital had outsourced its immunotherapy unit to a private company, Shanghai Claison Bio-tech Co. Ltd., said Chen Yuanfa, a medical industry whistle-blower close to Putian (China) Health Industry Chamber of Commerce. The chamber is the largest grouping for private hospitals in the country with over 8,600 medical establishments in the country as members. This includes several clinics run by Shanghai Claison Bio-Tech.

The military hospital had no oversight on the doctors and staff who worked at this outsourced immunotherapy unit, even to ensure that they had the required qualification or accreditations, Chen told Caixin.

Another private company managed the military hospital's website and was responsible for marketing its services including the DC-CIK treatment, he said.

The National Health Commission, which oversees the medical sector, does not have the legal teeth to impose heavy punishments on hospitals to deter similar irregularities. Existing regulations do not allow the authority to impose fines on culprits or file criminal charges in courts, said Liu Ye, a lawyer from the Haishang Law Firm in Shanghai.

"To prevent abuse of immunotherapy technology, legislators need to come up with a set of legal guidelines to regulate research, clinic trials and their applications," Liu said.