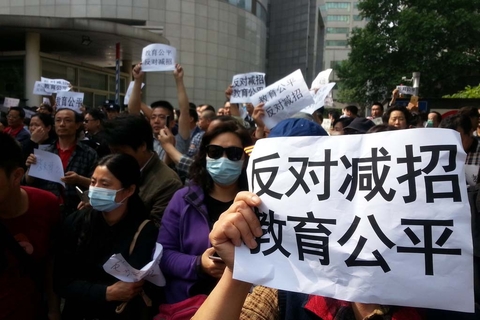 Parents holding signs that read "oppose reduced enrollment, education equality" protest outside the provincial education department in Nanjing, in the eastern province of Jiangsu, on May 14

(Beijing) – Education authorities say a recent change to admission rules in rich cities that require universities to take in a greater number of non-local students will not put students in the home province at a disadvantage.

Following protests by parents, the Education Department in the eastern Jiangsu Province said on Weibo, the Chinese version of Twitter, on May 13 that the college acceptance rate for local students "will not be lower than the previous year" because the number of test-takers in the province declined each year.

In April, the Ministry of Education and the National Development and Reform Commission, the country's top economic planner, released a jointed directive, which required 12 "cities and provinces with abundant higher education resources where (students) face less pressure to enter college in 2016" to admit 160,000 students from 10 other regions, most of which are poorer such as the southwestern provinces of Guizhou and Yunnan.

Parents who fear the change will make it more difficult for students to find a place at schools in their home province staged a series of protests in front of local education department offices in several provinces.

Elite universities in the country are concentrated in a few provinces and allocate higher admission quotas to local residents.

The government said changes to the admission policy aim to bridge the regional education gap.

The central province of Hubei will admit 40,000 students, the highest among the 12 regions, and Jiangsu will set aside 38,000 spots, the second most, the directive said.

However, Beijing, which is home to 37 top-tier universities – the highest among all Chinese cities – according to ranking website Gaokaopai.com, was exempted from the change. The directive also excluded the northern city of Tianjin that has 13 elite institutions.

However, Beijing admits a larger number of students whose families have a household registration, or hukou, in the capital compared to some of the regions where admission rules are to be changes, an expert said. For example, only about one in 100 students in Jiangsu can go to the top-tier provincial universities, while almost a quarter of the students in Beijing can go to the best schools in the city, said Xiong Bingqi, vice president of the 21st Century Education Research Institute, an educational think tank.

Parents quoted by the news website The Paper said they felt angry and confused as to why the policy did not require the Beijing government to admit more non-local students. Parents in Jiangsu told the website, there was already fierce competition to enter universities in their province and the policy might put local students at a disadvantage.

Although government documents show that quotas for students from less developed regions have been in place since 2008, the numbers this year "are understood to be significantly larger than those in previous years," state-run newspaper China Daily said.

However, the provincial education department in Jiangsu said the admission rate for local students entering top-tier provincial universities has increased in the past three years and the trend will continue this year.

Liu Chuantie, director of the Hubei Education Department, told media on May 13 that officials will make sure the number of local students enrolled in universities in the province and the acceptance rate will not be lower than in 2015.