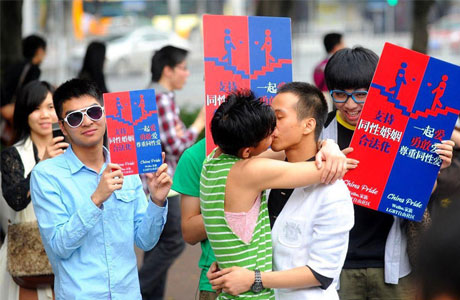 (Beijing) – Less than 15 percent of lesbian, gay, bisexual, transgender and intersex (LGBTI) people in China chose to come out to their close family members, a United Nations report published on May 17 showed.

LGBTI respondents said they experienced the worst stigma and prejudice from family members, the largest national survey conducted on sexual and gender diversity issues in the country found.

"A deep impression from my childhood was that my father once called me a 'sissy boy,'" a person from a sexual minority told researchers. "It was really humiliating, with a clear intention of degrading me, because he was ashamed of me."

A lack of family support has also led to "marriages of convenience," where a gay man and a lesbian woman with knowledge of the other's sexual orientation enter into a legal union. Over 13 percent of the married LGBTI respondents said they opted for these sham marriages.

Because same-sex marriage is illegal in the country, 2.6 percent of same-sex couples chose to register their marriage in countries where the law allowed it, the research found.

The report found widespread discrimination against LGBTI people in the country.

Only 5 percent said they would disclose their sexual orientation, gender identity or gender expression to peers at school, in the workplace, or in their religious communities.

More than half of the respondents, both from a sexual minority and others alike, said they have been subjected to or seen other people experience "rejection" from family members. The figure was much higher than those who said they had faced or seen others experience discrimination from middle school teachers or clergymen.

The study, conducted by the United Nations Development Program in China, Peking University's sociology department and the Beijing LGBT Center, a non-profit organization, surveyed 28,000 participants in over two months in late 2015. Almost two-thirds of the respondents identified themselves as belonging to a gender or sexual minority.

The study, however, said that young people were less prejudiced.

The research found that younger the respondents, the higher the opposition to stereotypes, a binary notion of gender, stigma against people with AIDS and the view that homosexuality was a disease.

Respondents born in the 80s and 90s represented the highest proportion of those who would accept their own children as being LGBTI.

The International Day against Homophobia, Transphobia and Biphobia falls on May 17, and it marks the decision to remove homosexuality from the International Classification of Diseases of the World Health Organization in 1990.