Doctor Beaten to Death in Hunan by a Patient's Family 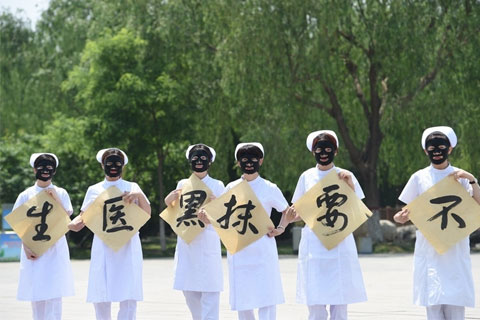 (Beijing) – A doctor was beaten to death in the central province of Hunan by a patient's relatives, the latest in a series of attacks on health care workers by disgruntled patients and their families.

A patient's relatives assaulted Wang Jun, an ear, nose and throat specialist at Shaodong County People's Hospital, on May 18, the local government said in a statement on its verified account on WeChat, a popular social media app. The patient was a child injured in a car accident, a hospital employee told state-run newspaper Global Times.

The relatives first argued with Wang saying he “was not attentive enough when treating the patient," the government statement said. Then they swore at him and knocked him to the ground and started beating him.

Wang slipped into a coma while being treated and died several hours later, the National Health and Family Planning Commission said on its website on May 19.

This incident happened less than two weeks after a retired dentist was killed by a former patient who claimed to have a grievance in the southern province of Guangdong. The killing sparked a public outcry, with hundreds of people holding a memorial for the dentist in Guangzhou, and medical workers changed their profile pictures on social media to a black ribbon.

The country's health care system has been rattled by an increase in the number of violent attacks against medical professionals in recent years. Official figures showed cases of assaults against medical staff had increased from about 10,000 in 2005 to about 17,000 in 2010, the latest year for which data is available.

Inadequate doctor-patient communication, high medical bills, and patients' dissatisfaction with the quality of treatment have all led to this epidemic of violence, Cao Jian, a researcher from Tsinghua University's Research Center for Health Care Management, wrote in a commentary for Caixin's Chinese website in 2015. Workers at public hospitals in bigger cities are struggling to cope with an influx of patients from rural areas that lack medical resources, said Cao, and they are not able to offer adequate care leading to patient complaints.

Government efforts to improve the safety of hospital staff have had limited success. For example, the central government has been pushing for a nationwide insurance program to cover payout linked to lawsuits brought upon by patients. In March, a senior official at the China Insurance Regulatory Commission told Caixin that the government was considering making it compulsory for physicians at all the public hospitals to have this cover by 2020.

But hospitals and medical workers do not have much faith in these policies because there is no third-party to arbitrate on cases of medical malpractice, said Cao, and insurers lack the expertise to settle these disputes.

A surgeon in Beijing also said an insurance scheme is not enough to diffuse tensions between hospitals and disgruntled patients that are mostly caused by a lack of trust, and settlements would take a long time.