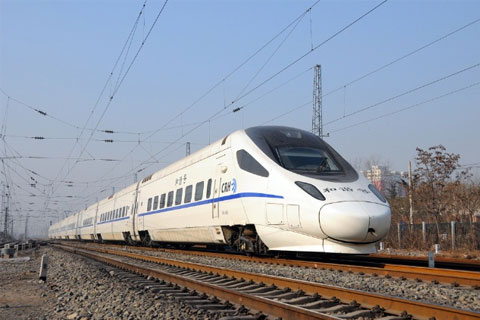 The team led by Sheng Guangzu, general manager of the CRC, includes representatives from state-owned infrastructure developer China Railway Construction Corp. Ltd. (CRCC), China Railway Signal & Communication Corp and several banks, an employee of the CRC said. They left for Kuala Lumpur on May 23 to meet with Malaysian government officials to lobby for the project that involves constructing a 350-kilometer track, he said.

A Japanese consortium led by the East Japan Railway Company, known as JR East, are also bidding for the project. European companies including Germany's Siemens and Spain's Talgo have signaled their interest in joining the race, but sources from the Chinese side said Japan was their main rival.

The competition looked "grim" from the Japanese perspective because the Chinese were willing to offer preferential terms on loan facilities, several employees working for firms in the Japanese consortium who asked not to be named said.

Japan's ambassador to Malaysia has told Tokyo that unless the government supported the Japanese consortium to offer more attractive funding options they would lose the tender, a Japanese source said.

The strength of the Chinese bid lay in the financing model it proposed, the CRC employee told Caixin. He did not give details of the payment options or interest rate offered.

Chinese firms expected to complete construction in two years, a timeframe much shorter than what Japanese companies require, said Lee Der Horng, a professor of civil engineering at the National University of Singapore.

The bid is backed by the Chinese government, which is eyeing the project to boost to the export of Chinese bullet train technologies, the CRC employee said. He said China had secured contracts for two major high-speed rail projects: one linking the Indonesian capital Jakarta to the country's third largest city Bandung, the other connecting Moscow and Kazan in Russia.

The proposed rail road is expected to cut travel time between Singapore and Kuala Lumpur to 90 minutes, from more than 6 hours. The project may cost between US$10 billion to US$15 billion, The Strait Times, a news outlet in Singapore, reported in April.

Negotiators on the Japanese side emphasized on the reliability and safety of their bullet train technologies and cited a 2011 accident in the eastern province of Zhejiang, which killed more than 40 people, as an example of the safety issues with China's rail technology, an employee with CRCC said.

The Singapore government preferred "the Japanese to provide the rolling stock and signaling systems because of its tested technology," the Strait Times article said. But Malaysia, which will pay a bulk of the construction costs, was in favor of the Chinese proposal, it reported.

The governments of Singapore and Malaysia approved the project in 2013 to boost travel between the two countries and to enhance business and cultural exchanges.

Both countries will work together to pick a winning bid and they plan to sign a contract in 2017, an official from Malaysia's Land Public Transport Commission told the Malay Mail Online in September.