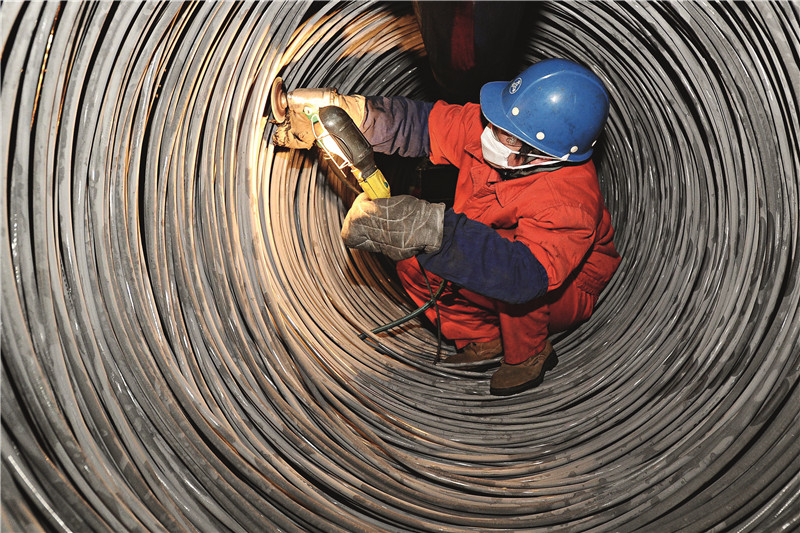 Workers check the quality of steel products at state-owned Dongbei Special Steel Group Co.in the northeastern province of Liaoning. The company defaulted on 700 million yuan worth of debt earlier in May

(Beijing) – Bankers nationwide are rushing to call loans issued to state-owned and private companies to avoid a rising tide of debt dodging that's not only legal but often supported by the government.

Some companies in the past year have frustrated creditors by declaring bankruptcy, while companies in the steel manufacturing and coal mining industries have used asset restructuring projects to avoid debt obligations.

"Many companies are using bankruptcy and asset restructuring as measures to skip out on bank loan repayments," said a source at a bank who asked not to be named.

Bankers are struggling to cope as bad debts mount. The total value of loans in default reported by the nation's banks at the end of 2015 surged nearly 48 percent year-on-year to 1.19 trillion yuan, according to a source close to the China Banking Regulatory Commission. The overall default rate for China's banks rose about a half-percentage point during that period to 1.8 percent.

A few days later, citing trouble repaying creditors, the company intervened in the bond market by suspending trades on all of its outstanding bonds.

Market concerns over the CRM suspension eased May 17 when the company paid off holders of bonds worth 1 billion yuan. But trading did not immediately resume for the rest of the bonds, and the company issued a warning through Shanghai Clearing House about possible bond defaults.

CRM's crisis was the subject of an early April meeting between officials from 19 banks and the central government's State-owned Assets Supervision and Administration Commission (SASAC), which oversees CRM and other major state companies.

Sources close to the company said bankers raised objections over an SASAC debt-equity swap proposal that called for banks to receive stakes in CRM in exchange for forgiving half of the company's loans.

SASAC later announced that CRM would be taken over and its debt restructured by China Chengtong Holdings Group Ltd., a central government-backed asset management and investment company.

Yet the government decision may have further aggravated bankers since, according to a banking industry expert who declined to be identified, in China banks typically receive less than 20 percent of what's owed whenever a company launches a debt restructuring.

Some financial experts argue that China's bankers have no one to blame but themselves for the current toxic loan predicament. Companies now in default or dodging obligations include former darlings of bank loan officers who enthusiastically extended credit on the assumption that the Chinese government would never let state-owned borrowers default.

But bankers who were approached by companies for credit lines are now busily calling loans from their borrowers, said a branch head of a joint stock bank.

Banks have been blacklisting borrowers who maliciously skirt debt obligations ever since the China Banking Association (CBA) wrote guidelines for a tracking system in 2006. The guidelines were updated in 2013. The association's chief legal adviser, Pu Xiangrui, told Caixin that CBA is now working to tighten the guidelines and extend the rules beyond companies to include other delinquent borrowers such as loan guarantors.

Pu said without a law on the books and other legal support, it's hard for a financial institution to judge whether a delinquent borrower's actions were intentionally malicious. He called for stricter controls on borrowers with bad credit and persuading banks to toughen and more carefully adhere to sound lending practices.

Nevertheless, bank sources told Caixin that for many years bankers put too much faith in state-owned enterprises (SOEs) as well as the central and local government agencies such as SASAC that ultimately control them. Because of this misplaced trust, many bankers neither properly supervised borrowers nor kept current on their ability to repay debt.

Pu, said banks should accept losses as their responsibility and as a price to pay for loose lending and lax borrower oversight.

One bank executive acknowledged that any bank that "carefully handles post-loan management can detect problems." Repayment problems have intensified because bank loan management practices are generally "shabby, and banks are always unprepared."

"Banks walked into" the bad loan situation "by themselves" and were not "forced," said another bank source.

Moreover, loan officers factored into their credit decisions a widely held assumption that struggling companies could count on taxpayer bailouts to stay afloat since "governments want to maintain social stability, regardless of the cost," said a Jiangsu Province banker who asked not to be named.

In fact, it seems the banker's assumption was only partially correct. Governments over the past year have helped companies cope with financial burdens – and thus acted in ways designed to maintain social stability. But their decisions have not always favored bankers and other creditors.

A source close to government regulators said SOEs have actually worked harder than privately owned companies to skirt debt responsibilities. Some state companies have transferred assets to subsidiaries to keep them out of the hands of creditors, the source said, while others, as quickly as possible, spun off quality assets before declaring bankruptcy.

"Unlike private entrepreneurs who fund companies with their own money, SOE executives are less hesitant about letting a company go bankrupt," said a brokerage source who chose to remain anonymous.

Local governments have also intervened in legal disputes between banks and financially troubled companies by ordering courts to postpone or even drop lawsuits filed by banks against delinquent borrowers "in order to protect local companies," said a bank source.

Last August, sources said, the government in central-eastern Anhui Province was the force behind a bankruptcy and restructuring for Huaikuang Xiandai Logistics Co., a subsidiary of Shanghai-listed Anhui Wanjiang Logistics Group, after Xiandai defaulted on more than 80 percent of its 15 billion yuan in overdue loans.

The money was owed to about a dozen banks including China Minsheng Bank and Industrial Bank of China. None of the banks supported the provincial government plan, but saw it as a way for the company to wiggle out of debt obligations.

"There were no discussions with creditors," said a source at one of Xiandai's creditor banks. "The restructuring plan was the government's decision."

Despite banker objections, government officials pushed until banks eventually wrote off 60 percent of the company's debt.

Privately owned companies are also riding the tide of debt dodging. In eastern Zhejiang Province, a hotbed for private entrepreneurship, state media last October reported that more than 700 companies had found ways to avoid repaying 11 billion yuan worth of debt.

Some companies dug out of a hole through legal loopholes or through "mutual guarantee" arrangements widely used for loan backing in Zhejiang.

A Jiangsu bank executive said some strained borrowers have gone so far as to turn themselves into police and confess to crimes such as loan application fraud, thus risking a possible prison term but forcing termination of all loans and loan guarantees, leaving banks holding the bag.

In another slippery maneuver, bank sources said, some company owners have tried to transfer personal assets to friends, relatives or acquaintances so that these would not be seized by creditors in a default. These owners "are openly dodging debt obligations," said a source.

Nevertheless, bankers say they're more concerned about default risks tied to SOEs than private firms. They point to past government intervention as a reason for concern in the face of China's ongoing economic slowdown.

A standout intervention dates to March 2013, when SASAC ordered Chengtong – the firm now controlling CMA – to take over and restructure the debt-ridden paper mill operator MCC Paper Group after the company said it could not repay 14.5 billion yuan owed to 29 banks.

The company "had more than 10 billion yuan in unpaid loans," said a source at a creditor bank. "With a simple order, SASAC transferred it."

A committee representing MCC's creditor banks complained to SASC, the source said, demanding repayments. The banks then blacklisted Chengtong, claiming the firm had dodged debt, and banned it from all credit services in the city of Beijing.

Negotiations ensued, and late last year the banks and Chengtong agreed to a restructuring plan for MCC. Chengtong's name was removed from the blacklist.