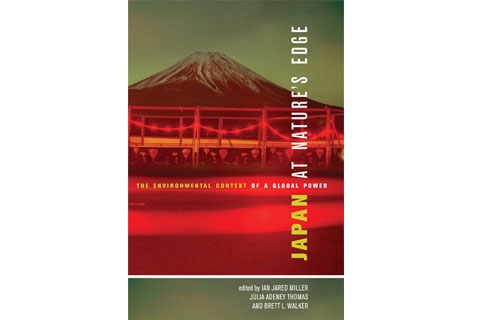 If Nature were human, we would wonder at the cruel irony of its setting the Fort McMurray fires that in May 2016 struck at the heart of Canada's oil production, shutting down petroleum extraction in the country's tar sands heartland, a place that even by the standards of a messy industry is at the far, very bad end of the environmental spectrum.

If we wanted to continue thinking of Nature as anthropomorphic, perhaps even thinking of her as Mother Nature, we would also wonder at the even crueler irony of an earthquake off the coast of Japan in March 2011 that led to the meltdown of three nuclear reactors at Fukushima. The incident was, excepting the 1986 meltdown at Chernobyl, the most serious civilian nuclear accident ever. These triple meltdowns, whose toll of death and suffering remains unclear, occurred in a country that was the subject of the only two atomic bomb attacks in history, on Hiroshima and Nagasaki, in 1945.

Nature is not a person, of course, and our attempts to anthropomorphize environmental forces is dangerous.

But just what is "nature" or the "environment" and how should we think about it in this new age? Environmental history examines the dynamic interplay between humans and the non-human environment, whether that be earthquakes, climate change or our relationship with dolphins (do we hunt them, put them in watery zoos, or use them to frame how we see Japan and the Japanese?). Japan at Nature's Edge: The Environmental Context of a Global Power is an eclectic collection of essays that challenge conventional thinking about Japanese ideas of nature as well as attempting to make sense of the triple disaster of March 2011's earthquake, tsunami, and nuclear meltdown. This book is something of a hybrid, as most of the chapters consist of papers that were presented at a conference before the triple-shock of March 2011, but the work is richer for them.

The age of the Holocene, the 11,700 years since the end of the last great Ice Age, seems to be ending, or at the very least giving way to one in which global climate and environment is increasingly shaped by human activities. The relatively warm and fairly consistent global climate is giving way to one where human actions – notably in the form of greenhouse gas emissions – are interacting with climate on a planetary scale.

A hotter, less diverse and more erratic climate is almost certain. The world's largest insurance companies are among those planning for this future, trying to price risk in a world in which storms are stronger and less predictable. The 2013 super-typhoon Haiyan that ripped through the Philippines was alarming to insurers not for the scale of destruction as much as the fact that it occurred more than a month outside of the normal typhoon season.

Certainly this calls for new thinking on history. The old notions of great man history, where a single individual drives the narrative, look paltry at a time of Fort McMurray, Fukushima, and killer hurricanes like Sandy and Katrina. These sorts of climate changes have been theorized since even before Nobel laureate Svante Arrhenius's seminal 1896 paper on the warming effect of carbon dioxide in the atmosphere. So it is none too soon for historians to take up the challenge of writing a history that reflect on humans in the world as well as human impact on the world.

We must think about history in a context of an environment that humans have altered (and continue to alter) in a way as to make climate more powerful, thus amplifying the "natural" world's impact on the "human" world. Part of that means redefining the boundaries between these worlds, for environmental forces are showing that our attempt to wall off the "human" from the "natural" worlds is provisional at best and disastrously short-sighted at worst. Can we even realistically any longer conceive of studies that draw clear-cut limits between our world of systems – whether nuclear power plants or petroleum extraction and refining enterprises – and the environment in which they are situated?

Climate change is not the only challenge to our understanding of the intersection of the human and environmental worlds. Japan is a country where nature has been manufactured and engineered on a scale with few global parallels. Editor Brett Walker writes how the March 2011 tsunami showed this blurring of the natural and the man-made: "When the thirty-foot wall of water careened onto Japan's northeastern coastline, moving at the speed of a jetliner, it flooded a highly engineered space, one constructed of cement retaining walls, coastal fishing ports and loading docks, airports and department store parking lots, carefully tended farmlands and plastic greenhouses, and other man-made landscapes….When the wall of water entered Japan's social and engineered landscape, it was channeled, directed, and twisted by this man-made space, making it not a natural disaster at all."

Japan's devastating Fukushima accident raised fundamental questions about energy and the environment not only for Japan but for the world. The massive earthquake and the ensuing tsunami led to the deaths of more than 20,000 people and the meltdown of three of the six nuclear reactors at Fukushima. The accident and its aftermath have caused a global reassessment of nuclear power. Germany decided to eliminate nuclear power as a result of the accident.

Japan is often viewed, both in the popular imagination abroad as well as in Japan's own self-identity, as the country that best marries an aesthetic of appreciation for the natural world with the dynamism and growth of an industrial society. Yet, as contributors to this volume show convincingly, this aestheticizing of the Japanese identity is only part of the picture. Japan is a place that, with relatively few natural resources, has seen much of its history defined by a hunt for raw materials, from fish to petroleum. Japan was forced to open to Western trade in 1853 by Commodore Matthew Perry's famous "black ships" (the black referred to the ships' coal-burning smokestacks) partly to gain US access to the country's rich whaling grounds and to ensure help for the shipwrecked whalers who not infrequently washed up on the country's shores. As insular Japan expanded, its pelagic empire, the domination of offshore fishery areas, was critical.

Japan also is a place of environmental destruction. The Minamata mercury poisoning, which included a longstanding refusal to acknowledge the problems let alone compensate the victims, is only the most notable case. Its stubborn refusal to stop whaling, despite whale meat being a fairly recent and marginal part of the diet, one that was introduced to deal with the challenge of mid-20th century food shortages, is another case in point. So, too, is the practice of dolphin killing, a practice that is understood very differently in Japan and in the West, as discussed with critical subtlety by Ian Miller.

The essays in this volume suggest some ways in which historians might respond to the new realities of the Anthropocene and provides an attempt both at reintroducing the natural environment to country-specific historical studies – in this case, of Japan – and also for looking closely at Japan in the changing global environment. Julia Adeney Thomas's ambitious and provocative concluding essay, written after Fukushima, sketches out a manifesto for a new history that will encompass environmental agents such as animals, water and geological forces, but considers our species as a subject for historical study, with a goal of marrying local and national history with planetary history.

Japan at Nature's Edge is characterized by a variety of largely unconnected papers on various environmental themes. At first glance, this seemed a somewhat random collection united only by the fact that they all deal with different aspects of Japan's engagement with larger environmental forces. However, as a group these essays serve to underpin the aim, as editor Ian Miller writes, of demonstrating "the need for a new kind of narrative: environmentally engaged stories that help us begin to reconsider not only who and what counts in history but also what counts as history."

These are tall ambitions. Don't accuse these authors of being modest. This book deserves to be read widely. These are important ideas not just for scholars but for everyone who cares about the future of the planet.

Mark L. Clifford is the author of The Greening of Asia (Columbia University Press, 2015). He is the executive director of the Asia Business Council