The Clash between Ideological Correctness and Academic Freedom 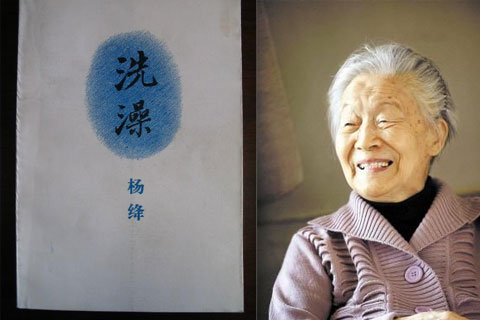 After reading Baptism, an engrossing novel by acclaimed author Yang Jiang, most readers will agree that academic freedom is fundamental to a scholar's pursuit of the truth and to disseminate knowledge without fear of censorship.

The novel, which digs deeper into the lives of a group of intellectuals from the "old society", who are forced to adjust to a new reality after the establishment of the People's Republic in 1949, was published in 1988. It is the only novel by Yang, an iconic playwright, author and translator who died on May 25, aged 105.

Yang, with her characteristic wit, tells the story of several scholars who had studied abroad, specializing in foreign literature, and are struggling, upon their return, to find a place in the new social order created after the Communist victory in 1949. The book reveals the hopes and fears of these academics as they endure the first wave of political upheaval in the country.

The Beijing literary institute, where the story is set, "was brimming with talent." "Even some anti-Communist veterans" were promoted as professors, the novel goes.

But from the beginning, officials laid out two principals, saying scholarly work should "serve the people" and "be guided by Marxism and Leninism."

"Serving the people" is a slogan that cannot be disputed. But it was difficult to implement in the context of academic research. How can scholarly research on literature from Western bourgeois states serve the Chinese people? When French literary expert Zhu Qianli proposed a project, for instance, to study French poet Charles Baudelaire's The Flowers of Evil, a party official opposed it saying "The Flowers of Evil is a decadent novel. How can it serve the people?"

The principal of working "under the guidance of Marxism and Leninism" also creates problems because many scholars at the time had little understanding of these political theories and philosophies. The party leader in the novel attempted to solve this problem by requiring them to research Soviet Union literature, whose ideas should "take precedence over all others."

Such ideological restrictions repressed academics, killing their enthusiasm and demotivating them. Party cadre who supervised academic research at the time had little professional understanding, resulting in constant conflicts. When the Three-anti campaign, a political movement targeting corruption, waste and bureaucracy, got underway in 1951, officials used this as a pretext to reprimand scholars who dared to challenge authority.

The title of the book, Baptism, is a metaphor for this tumultuous period where everyone was expected to "wash off the filth of the old regime so that they could be reborn."

As the novel goes, academics labeled as "intellectuals from the old society" and those who had studied in Western countries were forced to reflect on their "false views", make self-criticisms and confess their alleged faults. The more they debased themselves with assessments full of fabricated or exaggerated accusations, the more praise they received from the authorities.

As the campaign unfolded, some scholars who were unable to endure the attacks and humiliation chose to commit suicide. As the persecution gradually eased after 1952, academics "who were cleansed" were appointed to different positions. Most of them, who had dreamt of "changing the world quietly through literature," decided to "stay away from literature as far as possible."

Mi Qin is a magazine columnist and a contributor to Caixin Weekly. This is a translated excerpt of her commentary on Caixin's Chinese website