By staff reporter Shi Rui and intern reporter Li You 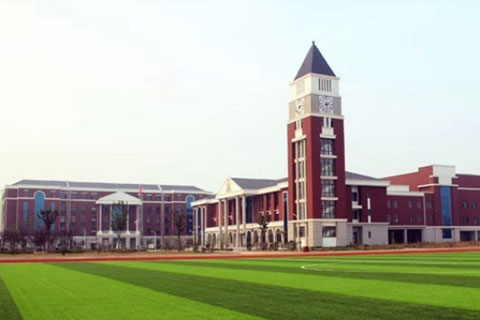 (Beijing) – A decade earlier, less than 4 percent of graduates from a popular high school in Beijing, known for high quality teachers who groomed students for elite universities, left to study abroad each year.

The majority chose to pursue their higher studies at home, with the brightest among them heading to top-ranking institutions like Peking University and Tsinghua University, said Shi Guopeng, heads of the Beijing No. 4 High School's international program.

Students are taught according to a curriculum set for U.S. high schools, but follow the Chinese curriculum in subjects like math and physics and also learn Chinese literature, the school's website showed.

In recent years, nearly one in three graduates of the school have opted to study abroad, Shi said.

"Several of them could have easily entered some of the best Chinese universities, but they have chosen to go abroad instead," Shi said.

International schools were once reserved for expatriate families working for multinational companies or serving in the diplomatic community.

Now more local families are using international schools, where they follow the A-levels or International Baccalaureates curriculum from Britain or take Advanced Placement programs from the United States, as a springboard to getting places in British or U.S. universities.

The number of Chinese students who enrolled to study in a foreign university in 2015 rose by 14 percent to 523,700 compared to the previous year, data from the Ministry of Education showed.

Data from the U.S. Institute of International Education in November shows that 124,522 Chinese high-school graduates went to study in colleges in the United States during the 2014-2015 school year, up 12.7 percent year-on-year.

This voracious appetite has prompted many elite public schools to start offering programs that follow a foreign curriculum and spawned many private schools in wealthier cities on the east coast.

The boom has also raised the price of an elite education. Some international schools charged as much as 300,000 yuan per year in tuition alone, compared to the few thousand yuan per annum paid by students in a public school following the domestic curriculum.

When Beijing No.4 Middle School opened a division to teach an international curriculum in 2003, there were enough spots for anyone who could afford to pay the tuition, said Shi, but now they could only admit one in ten applicants.

An admissions officer at the international division of another middle school in the capital affiliated to Beijing Normal University said nearly 600 students have applied for the 60 spots available this year.

Keystone Academy in Beijing, a private international school, said all spots opened for the 2016 to 2017 school year were taken by Chinese students as early as February, months ahead of the start of the school year in September.

Many international schools, overwhelmed by demand, have started asking applicants to take expensive foreign language proficiency tests just to get admission. Many schools use scores from exams such as the Test of English as a Foreign Language (TOEFL) Junior, for students aged 11 to 15, or the U.S. Secondary School Admission Test (SAT) to filter applicants, said Wang Mengyan, who oversees some of these tests in China. Up to 50 international schools in the country asked for these test scores in 2016 compared to just five two years ago, she said.

A few years ago, many Chinese students from wealthy families who did not have a strong academic track record opted to enroll in an international school to avoid the fiercely competitive national university entrance exam, or gaokao, said Shi.

But recently, a growing number of middle school students with a strong academic performance are applying, because they see it as a ticket to enter a prestigious foreign university, a report published by the Center for China and Globalization, an NGO in Beijing specializing in talent and globalization studies, showed.

The report based on survey of five elite middle schools in the capital shows that two thirds of the students who left to study abroad were at the top of their class.

The loss of the finest young talent to foreign institutions has raised concerns about a possible brain drain. Over 1.5 million, or nearly 57 percent of Chinese students, who left to study abroad from the early 80s to the end of 2013 have not returned, state-run Xinhua news agency reported citing official data. Many have become leaders in their respective fields of study, Xinhua said.

Xu Youyi is a student who switched from the elite Beijing No. 2 Middle School to a private international school, before she left for Pomona College in Claremont in Southern California.

Chinese schools exerted a lot of pressure on students to learn by rote to get high scores at exams, she said, and there was little emphasis on developing their self-learning capabilities and social skills.

But the pressure faced by students in international schools or in a foreign college was not any less, said Xu. "But students are encouraged to take the initiative to learn on their own according to their own goals and plans at their own pace," she said.

Educated parents do not want their children to be just good at taking exams and instead want to give them a well-rounded education that sharpens their critical thinking skills, allowing them to be more independent, she said.

The growing trend among high-scoring students opting to follow an international curriculum served as a warning sign to the Chinese school system, said Zeng Xiaodong, a professor of education at Beijing Normal University.

The central government in 2009 unveiled a school reform plan from 2010 and 2020 pledging to cut red tape and reduce inequality in access to education. However, little progress has been made as parents and teachers still have little say in how Chinese schools are run, experts said.

The rising number of public schools offering programs that follow an international curriculum have raised eyebrows, with critics saying it is a misuse of public resources.

Several members of the country's top government advisory body, the Chinese People's Political Consultative Conference, presented a proposal in 2013 asking the government to shut down programs teaching a foreign curriculum in public schools. This prompted education authorities in the capital to impose a licensing freeze on such schools starting in February 2014. The Beijing Municipal Education Commission said it would closely monitor tuition fees and teaching quality of some 20 public schools that run an international program.

In July 2015, Beijing No. 4 Middle School announced that it will spin off its international unit as an independent entity from the new semester in September 2016.

Other public schools with an international division should follow this strategy to minimize risks from any regulatory changes, said Zeng. These independent entities should be turned into private not-for-profit institution, he said.

"Allowing public schools to spin off their international divisions makes more sense, because the former should focus on what they're entrusted to do," Zeng said. Meanwhile, "regulators should be open-minded to allow different types of schools to flourish to meet various education needs."