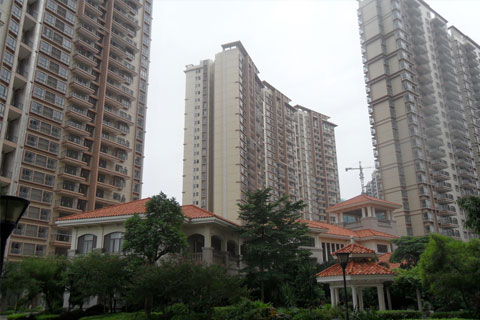 The northeastern city of Shenyang and the provinces of Shandong and Sichuan announced similar measures for home buyers earlier this year, including cash payouts. Maintaining strong property sales is critical to local economies and finances, since related land sales for new development are a key source of government income.

In Dalian, college students and graduates who graduated less than five years ago can receive a government subsidy when they buy or rent apartments in any of the city's four central districts, according to a policy released last week by the northern coastal city.

The payments range from 400 yuan per square meter to 200 yuan for buyers depending on their level of education. For example, the holder of a doctoral degree can save 40,000 yuan off the price of a 100-square-meter home.

Besides the subsidies, Dalian also relaxed minimum down payment requirements, cut transaction taxes, and said it would seek to have 1.2 million rural residents relocate to the city, hopefully to buy homes there.

Subsidies were also available for renters who either graduated less than five years ago or own their own startup companies, according to the policy. The size of subsidies also depends on a person's educational degree, ranging from 240 yuan to 900 yuan every month.

The measures were announced as the latest housing market data from the National Bureau of Statistics (NBS) show the price of new homes in Dalian remained flat in April compared with a year ago, amid concerns about oversupply.

It would take about three years to sell all of the homes that have been built in Dalian, according to a March report by real estate services firm Leju Holdings Ltd.

The Dalian government said it wants to bring the local inventory of residential properties down to a "reasonable level" within three years. The goal for this year was to increase sales, measured by square meters, by 10 percent from last year's level, the policy says.

Slow sales have deterred developers from buying new land and weighed on the city government's revenue from land sales.

Data from the Ministry of Finance show that Dalian's revenue from land sales in 2015 fell the fastest from the previous year's level among all 36 regions it tracks, which includes all 31 provinces and autonomous regions on the mainland, plus five cities whose data were calculated separately.

Dalian made 56 percent less revenue last year from selling land, the ministry's data show. The other two areas where revenue more than halved were Ningbo, a city in the eastern Zhejiang Province, and the Inner Mongolia Autonomous Region in the north. The ministry did not say how much their revenues were.

China's housing market has gone through an investment and construction boom and is headed for what pessimists say is a collapse in some small cities where it would take years to sell existing properties. With the economy slowing, finding buyers has become more difficult.

The central government has made reducing the stock in the residential property market a top priority this year and has told local governments to resolve their real estate problems as they see fit, rather than following a unified action plan due to widely different local conditions.

The government of Shenyang raised eyebrows in March with a policy that allowed college graduates to buy homes without any down payment, in addition to giving them cash to help repay their mortgages. It reinstated the down payment requirement the same month in response to criticism.

Migrant workers are viewed as the most likely beneficiaries of recent subsidies. The eastern province of Shandong, for example, has announced measures this year to subsidize migrant workers with cash that would reduce their home purchase bill by up to 10 percent. Meizhou, a city in the southwestern province of Sichuan, has also been offering subsidies to migrant workers, and the provincial government has said other cities should follow.