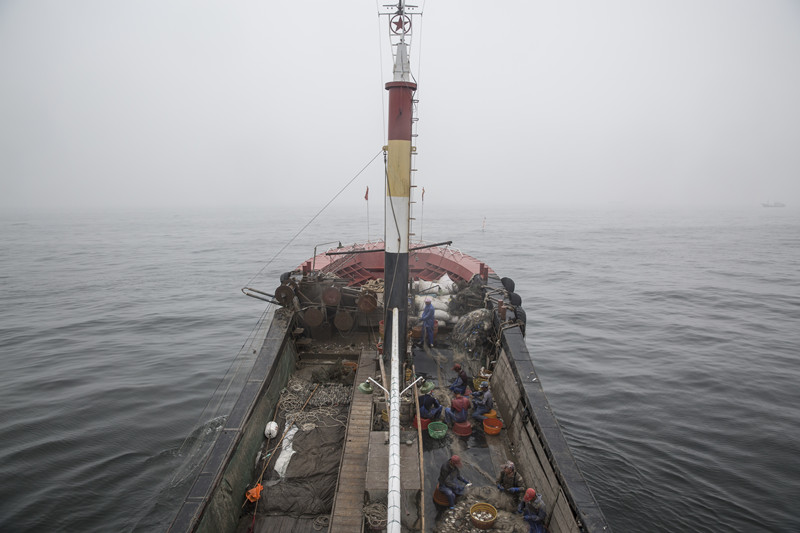 (Zhoushan) – Events that preceded the sinking of fishing boat 11307, apparently with the loss of all hands, are shrouded in mystery as thick as the fog that frequently blankets the Zhoushan coast.

Equally mysterious, at least in the eyes of some in the fishing industry and relatives of the 18 crew members missing since the 11307 sank May 12, are safety oversight gaps that some say contribute to high fatality rates for sea and coastal fishermen in China.

The 11307 was one of four, Zhoushan-area fishing boats that reportedly sank within a week in early May. Each may have collided with another vessel off the coast of eastern Zhejiang Province and-or Shanghai, according to media reports.

Fishermen were among the 74 people who died or were reported missing in connection with 69 coastal shipping accidents – many of which involved two-vessel collisions – tallied between January and April, according to the central government's Ministry of Transport. A separate Caixin tally, based on media reports, concluded 14 fishing boats sank nationwide in May, including the 11307, leaving at least three people dead and 71 missing.

And a significant number of sinkings and fishing crew fatalities apparently never reach the media or official record books.

In an interview with Caixin, Sun said according to his estimates about 2,607 fishermen working on licensed vessels die on the job every year. No one knows the death toll for those employed on unlicensed boats.

And according to Zhang Zhuli, director of Shanghai-based research agency Fisheries Machine and Instrument Supervision Center, at least eight fishermen lose their lives and 25 are injured in shipping incidents every day in China.

The fishing industry's government supervisors have been criticized for a lack of a cohesive oversight mechanism, which in turn factors into gaps in safety regulation that leaves fishing boat crews vulnerable to accidents and death.

A Zhoushan government maritime agency official who asked not to be named told Caixin that fishing sector supervision stands divided, with Ministry of Transport agencies in charge of some tasks and fishing industry regulators at the Ministry of Agriculture and the Ministry of Land and Resources' State Oceanic Administration handling others.

Government agencies are supposed to work together to provide support and handle investigations after a fishing boat gets into trouble, collides with another vessel, or sinks, said the Zhoushan official. But these agencies do not always cooperate with each another.

Moreover, the extent of fishing industry safety problems is unclear since the government does not track all fishermen fatalities nor every boat in the nation's huge fishing vessel fleet which, according to the United Nations, includes one-fourth of the world's fishing boats.

Sun said the Chinese government's ongoing effort to improve workplace safety across the country has long overlooked the fishing industry. As a result, fishermen labor on vessels that lack adequate safety equipment and without the kind of training that in an emergency could save lives.

To most fishermen, fishing is about placing the net and catching fishes, a task that "can be done by anybody," said Li Xinbiao, a Zhoushan fisherman. Very few have knowledge of how to handle safety equipment properly.

A notice issued by the Daishan County government May 27 informed relatives of the 11307's missing crew members that all were "presumed dead." The 45-meter boat, one of 2,407 registered in a Daishan fishing town, was owned by Captain Hu Guangcai.

The notice came a full 15 days after the vessel disappeared during a crab-catching voyage that started April 30, and 11 days after the sunken wreckage, with neither survivors nor bodies, was found.

The long pause between the ill-fated vessel's discovery and the notice's release was typical of the slow and sometimes scattered reactions by government agencies whenever a fishing vessel goes missing.

The Shanghai Maritime Safety Administration dispatched search and rescue teams to look for the crew of the 11307 one day after Zhoushan-area fishermen reported it missing to the local Ocean and Fishery Bureau, and some 33 hours after it disappeared from the radar screens monitored by local fishery authorities. The search, which lasted more than four days, ended when the vessel was found at the bottom of the sea near the mouth of the Yangtze River.

A Zhoushan Maritime Safety Administration official was cited by local newspaper as saying the fishing vessel's hull has been damaged in a way that suggested it may have collided with a much larger boat. Indeed, the 11307 sank near a marine traffic lane used by container ships traveling to and from the nearby ports of Shanghai and Ningbo-Zhoushan.

Lin Yun, the widow of the ill-fated vessel's chief officer Zhao Xiaohe, said she learned that in a phone chat on the evening of May 11, Hu told his wife that he had decided to sail toward the Yangtze estuary some three hours away from the boat's then-position. That was the last time anyone on board communicated with anyone on land, she said.

Fog that night may have impeded visibility, said a fisherman who was working May 11 near where the sunken 11307 was found. The fisherman, who declined to be named, told Caixin he saw dozens of container ships pass by the area that same night.

The tracking system records showed that 11307 disappeared from radar in the early hours of May 12, according to the Zhoushan ocean and fishery bureau.

But local newspapers reported that the Zhoushan fishery bureau only received reports from county officials about the missing vessel on the morning of May 13, and it immediately dispatched rescue force. Authorities haven't explained this delay in sending out a distress signal.

Relatives of the lost fishermen complained about the official response to the 11307 incident. Some rallied outside a local government office May 16 to protest what they saw as a slow rescue effort. And throughout the search and rescue period, many demanded more information about the incident and urged government agencies to explain their response.

The protests ended when the families of each missing fisherman received from local government a death compensation payment ranging from 800,000 yuan to 1.2 million yuan. By accepting a payment, each accepted the official conclusion that the sinking was accidental and forfeited rights to additional claims.

Also forfeited was any hope of seeing the 11307 again, as raising the boat from the sea floor was deemed too expensive.

"Salvaging would cost more than 20 million yuan," said He Jianlai, whose brother was among those aboard the 11307. "It's not worth it."