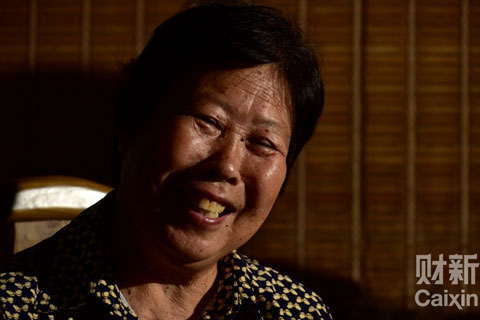 (Shijiazhuang) – More than two decades after a young man in the northern province of Hebei was executed for the alleged rape and murder of a woman, his mother is anxiously awaiting a retrial to clear his name.

Zhang Huanzhi's only son, Nie Shubin, was executed in 1995 – when he was 20 – for raping and killing a woman in a cornfield near Shijiazhuang, the provincial capital. A decade later, another man arrested for a separate crime, confessed to the murder.

Zhang had fought for years after this fresh evidence emerged to exonerate her son, but she kept on hitting a wall. The case is back in the public spotlight after the country's highest court, the Supreme People's Court, on June 6 ordered a court in the eastern province of Shandong to review the 1995 ruling, saying evidence that lead to his death sentence were "unreliable and incomplete."

Zhang's dogged pursuit, lodging repeated appeals at courts in her home province Hebei and in Beijing, has helped turn Nie's case into an example of the flaws in the Chinese criminal justice system, including the use of torture, lack of due process and lax review of death sentences.

But Nie's is not the only incident of a possible miscarriage of justice reported in recent years. In February, a man from the eastern province of Zhejiang, Chen Man, convicted of arson and murder, was allowed to walk free after languishing in prison for 23 years when his sentence was overturned due to lack of evidence.

In late 2014, a court in Inner Mongolia said an 18-year-old killed by firing squad in 1996 for alleged rape and murder, was innocent. The Inner Mongolia Higher People's Court said the defendant, Huugjilt, was wrongfully convicted after being tortured into making a confession.

Nie's case had also galvanized the legal community, media and the public to scrutinize the gaping holes in the country's justice system. "There is no doubt Nie will be exonerated soon," said Ma Yulong, a former reporter at Dahe Daily, a newspaper in the central province of Henan, who has followed Nie's case starting in 2005.

Nie's retrial can help in some measure to restore public faith in China's legal system, said Li Shuting, the lawyer representing his family.

The Shandong High Court in-charge of reviewing the case said the evidence on which the original verdict was based was incomplete because many questions have gone unanswered, such as the exact time the crime was committed and the weapon used for the murder. However, the court has not announced a date for a retrial.

Nie was sentenced for premeditated rape and murder on March 15, 1995 by the intermediate court in Shijiazhuang, after a closed-door trial, state media reports show. He was executed a month later.

In 2005, another suspect named Wang Shujin, arrested for a similar crime, confessed to raping and killing several women, one of whom turned out to be the victim in Nie's case. Ma was the first to break the news, which attracted wide public attention to the case.

After this fresh evidence emerged, Liu Jinguo, the head of the party's provincial Political and Legal Affairs Committee at the time, who oversaw the security and legal systems in Hebei, set up a special team to reopen Nie's case and ordered the results to be published within one month, Ma told Caixin on June 14.

Liu's order gave Nie's family a glimmer of hope, but it vanished quickly. The investigation stalled when Liu was promoted shortly afterwards to vice minister of public security in Beijing, said Ma.

From then on, Zhang Huanzhi has made countless trips to courts in Hebei and Beijing, to appeal her son's case, but she was turned down by officials who said her documents were incomplete.

It wasn't until July 2007, when the Supreme Court in Beijing accepted Zhang's appeal and ordered the Hebei High Court to review the case.

But this court never carried out the review. "We tried every means possible to get a retrial, but they were all in vain," said Li.

In March 2007, the other suspect, Wang, received the death penalty for four counts of murder and rape. But this did not include the victim in Nie's case, although Wang admitted to the crime. In a twist of fate, Wang even appealed his verdict and insisted that he had killed the woman Nie was charged with murdering. But his appeal was turned down by the Hebei court in 2013.

Wang is now on death row, waiting for the Supreme Court to review his sentence, but the process has been delayed due to his connection to Nie's case, Li said.

Ma said he had learned from sources in the Hebei public security system that officials had tortured Wang, forcing him to recant his confession connected to the 1994 murder in Shijiazhuang before the second trial.

There are "invisible" forces in Hebei's police and legal system that have resisted the reopening of Nie's case, said Ma.

In December 2014, the Supreme Court ordered a high court in another province Shandong to re-examine the files of Nie's case. The Supreme Court's June decision for a retrial, which comes after four delays, had rekindled the family's hopes to have Nie exonerated.

Li told Caixin that there were many holes in the evidence presented including Nie's testimony, the murder weapon used and even the exact date of his execution. He has been collecting evidence that show Nie was tortured while in custody and highlight deficiencies in due process when handling the case.

The case "is obviously a wrongful conviction with little complexity, but it has taken more than ten years to get a retrial due to delays by officials in Hebei," said Li.

Police offices' over reliance on harsh interrogation techniques to elicit confessions from suspects in criminal investigation cases have led to many wrongful convictions, said Li. Some investigators and officials rush to close a case to secure bonuses and promotion, he said.

Fundamentally, "the lack of independence of the judicial system had led to the miscarriage of justice," said the former journalist Ma. "Without further legal reform, there will be other cases like this in future."