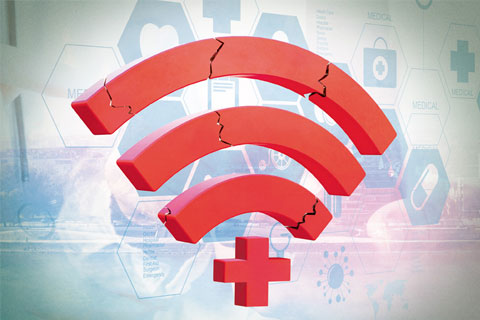 (Beijing) – By next year, according to one estimate, the value of China's red-hot, mobile app-based healthcare services market will hit 12 billion yuan – nearly three times what it was in 2015.

App service operators raised around 5 billion yuan in the first half of 2015 alone, according to the Beijing-based Internet analysis firm iResearch, which pegged the market's value that year at 4.3 billion yuan and predicted a near-tripling by 2017. Total fundraising in 2014, the firm said, was some 4.6 billion yuan.

In recent months, however, the healthcare app business has attracted skeptics, including market observers who wonder whether the fundraising phenomenon may have gone too far. And some investors who jumped on the fundraising bandwagon in the early years now fear their returns may be less than expected.

Among the hundreds of healthcare app service companies that opened for business over the past few years, and announced several rounds of fundraising, only 50 held successful first and second rounds, according to Caixin check of Chinese media reports. And only 10 managed to raise money in a third round.

Several sources working for institutional investors who asked not to be named told Caixin their firms have already pulled out of healthcare mobile app services investing.

Fueling their decisions are concerns that app operators have failed to meet expectations, particularly since none have found a way to tap the Chinese healthcare sector's most profitable pillar – state hospital patients. State hospitals have balked at efforts to open their patient records – arguably the nation's most valuable healthcare data – to app service operators.

Other investors have complained that app companies raised funds by promoting grand plans that proved weak, or even hollow.

Some app service executives themselves have admitted that the market's period of rapid growth may have passed.

Zhang Rui, CEO of the app service Chunyu Yisheng, which offers its customers a way to consult healthcare providers and is now expanding into insurance and property development, told Caixin he expects his company and others like it to see their market capitalizations rise moderately in 2016 following a two-year boom.

Other industry players, however, have turned pessimistic.

A manager whose investment firm invested in app startups said that, in his view, market capitalizations for most companies in the sector peaked in 2015 and have been declining ever since.

In fact, said the manager who did not want his name published, over the next three years "a large number" of app services will likely go out of business. Several investors interviewed by Caixin agreed the bloodletting will probably start this year and continue at least through 2018.

Chunyu Yisheng's app helps users consult with any one of about 410,000 doctors at major hospitals across the country. Its much larger rival DXY, a Tencent-backed online healthcare company, advertises access to more than 1.37 million doctors, while smaller competitor Haodf says it has about 300,000 doctors available through its platform.

Eye-catching statistics and niche ideas have been used by healthcare app service executives to drum up investor support. But some executives have withheld key facts about the business and failed to tell the whole story.

For example, said a source at a startup app-based service provider who asked to remain anonymous, some consulting-related apps overlap. And not all doctors on app lists are available online.

Even though consultant app operators go to great lengths to register doctors for their platforms, the source said, some of the best doctors are simply too busy to provide online consultation services.

"Almost every doctor at each of Beijing's large public hospitals is registered with more than five healthcare apps," said the source. "But most of these doctors have never consulted online."

Healthcare consumers with smartphones, meanwhile, are not necessarily regular mobile app users. In fact, according to the Beijing-based Internet sector consultancy Analysys International, a single consumer with a healthcare app uses it fewer than three times a year. And most of these apps are used to make doctor appointments.

One investor said app operators "make up stories" and have frequently changed business strategies to the point where they've "made (investors) anxious."

"Even after pouring money" into an app service "for up to five years, there still may be no clear direction," the investor said, adding that in his opinion "China's mobile healthcare market is a big bubble."

Some frustrated financiers have been looking for a way to exit their healthcare app investments. For example, some have been pressuring app service companies to launch initial public offerings on the Shanghai or Shenzhen stock markets, or through the New Third Board, also called the National Equities Exchange and Quotations, in order to offload stakes.

Few of healthcare app firms have listed since 2012, said an executive at the investment conglomerate Fosun International Ltd., which has invested in several app operators including Chunyu Yisheng.

Zhang said Chunyu Yisheng is preparing an IPO that would involve a spinoff of profitable assets. But he said it wasn't his idea, as "the listing plan is according to investor demand."

The Fosun executive, who did not want his name used, said that while healthcare companies overall are "still a hot spot" for investors, the healthcare app market overall is not hot.

A lot of healthcare app companies have focused on medical consultation services yet have failed to generate much commercial value, said He Huaping, deputy investment management director at the investment consultancy firm Beijing Bestar Consultation Co. A lack of access to key healthcare information such as doctor prescription and diagnosis has held these companies back, he said.

App service operators who don't want to disappoint their investors have been eagerly hunting for new, better and – ideally – sustainable revenue sources.

For example, DXY and the Beijing-based app service Xing Shulin, which offers industry information and services for physicians, have found new ways to serve doctors and pharmaceutical companies. DXY started a healthcare professional headhunting service that it says has been a good revenue source. Xing Shulin branched into services that help doctors conduct research and manage patient data.

Chunyu Yisheng, DXY and the healthcare divisions of Alibaba and Tencent launched plans to build hospitals or partner with existing hospitals in Beijing, Shanghai and Guangzhou. These would be private hospitals that specialize in specific fields such as skin disease and pediatrics.

Other partnerships are being forged between healthcare app providers and insurance companies.

Since last fall, Chunyu Yisheng and the property insurance arm of the People's Insurance Company of China (PICC) have worked together to offer PICC policyholders medical consulting and specialized hospital services.

Zhang said his company is also looking at buying a company that specializes in long-distance diagnosis technology.

Another app-insurance success story came in May when undisclosed investors injected 3.2 billion yuan into an app called Ping An Good Doctor. The app, developed and operated by a subsidiary of Ping An Insurance (Group) Co. called Ping An Health Cloud Co., offers users services such as doctor appointment and health consultation.

App services have also tried to break into consumer sales of pharmaceuticals, but with little success. Government restrictions on doctor prescriptions and sales of prescription drugs through the Internet have prevented app companies from expanding into the potentially profitable prescription drug market.