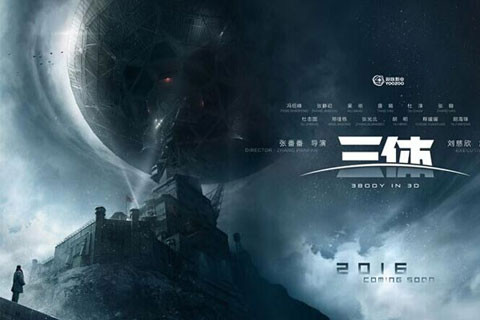 (Beijing) – The release date for a movie adaptation of a bestselling Chinese science-fiction novel has been postponed to 2017 due to delays in post-production, the filmmaker said, but angry fans pinned the blame on what they said was an inexperienced team handling the project.

The big screen adaptation of The Three-Body Problem, a novel by Liu Cixin that won the prestigious Hugo Award in 2015, was scheduled to premiere in July, but it has been postponed until next year, Yoozoo Pictures, the filmmaker, said in a statement on June 17.

Shooting of the film was completed in July 2015, but a team comprised of American, Korean, German and domestic visual effects companies were still editing the film "to polish China's first real sci-fi saga," the announcement said.

Yoozoo's statement came out a few hours after an Internet user who goes by the name Shijue Clark, said on Weibo, China's Twitter-like micro blogging site, that the quality of the movie was so bad that Yoozoo had postponed its release indefinitely.

Shijue Clark, who claims to be an employee of the country's largest filmmaker China Film Group Corp.'s marketing arm, also said Yoozoo's CEO and executive producer of the film, Kong Xiangzhao, had left the company. Shijue Clark's account is not verified by Weibo but it has more than 6,600 followers.

Yoozoo dismissed these posts as mere "rumor." Its statement said that the film's director, Zhang Fanfan, had done a "relatively good" job and Kong had stepped down as CEO to assume another role in the company as an executive director.

The Three-Body Problem ranked high in the bestseller lists in the country when it was first published in 2006. The story, set against the backdrop of political turmoil during the decade-long Cultural Revolution (1966-1976), involves a secret military project that sends signals into space to establish contact with aliens.

Author Liu Cixin sold the rights in 2009 to director Zhang for a big screen adaptation of his book, but the news upset some fans who were worried that Zhang, who had only directed three movies previously, was inexperienced.

Yoozoo's latest statement on the delayed premiere caused a stir among the book's fans again.

"It's like a Chihuahua trying to fight a Tibetan mastiff," an Internet user said on the Quora-like website Zhihu, referring to what he thought was an amateur director's attempts to take on a complex project.

"To turn a good novel into a good movie, there should be a developed film industry and a team that is good at every aspect from planning to distribution," another Net user said.

Yoozoo was established by an online game developer Youzu Interactive Co. Ltd. in November 2014. It has produced four movies to date. One of the films, The Crossing 1, had a 400 million yuan ($60.6 million) budget, but it bombed at the global box office, raking in only 260 million yuan, according to movie website Mtime.com, which offers reviews and tracks box office numbers.

China's box office sales grew by 48.7 percent to over 44 billion yuan last year, official data show. Lucrative ticket sales have been partly fueled by a trend where popular novels, published exclusively on the Internet with millions of readers, being adapted for film. Thirty-five percent of the domestic movies made in 2015 were based on online novels, data from Mtime.com show.

But Si Ruo, a professor at the Communication University of China in Beijing, warned that a storyline borrowed from a successful online novel does not guarantee profits, and that investors should still be cautious before diving into this crowded pool.