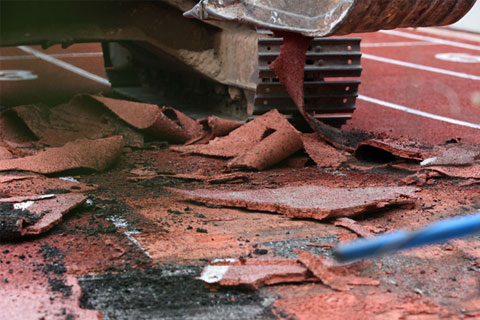 (Beijing) – Public outrage over schools that expose children to hazardous chemicals is flaring again after playground running tracks were blamed for nose bleeds and rashes among primary school students in Beijing.

Parental protests outside a primary school in Beijing's Xicheng District in late May and a subsequent state television investigation focused national attention on the rubber-like outdoor tracks across the country.

Concerns on potentially toxic running tracks first surfaced after dozens of students at the Yuanhe Primary School in Suzhou of eastern Jiangsu Province came down with symptoms such as nose bleeds, dizziness and skin rashes three days into their new semester last September. Their parents blamed "the toxic running track" built in the school a month earlier.

Similar incidents were reported in at least 15 cities and provinces as of May, including Beijing, Jiangsu and Zhejiang, according to Xinhua News Agency.

The furor prompted a June 22 order by the Ministry of Education that school administrators immediately suspend installations of all new, synthetic running tracks at schools, from kindergartens to colleges, pending material quality and contractor checks.

Similar fears of toxic exposure drew national attention in February after nearly 500 secondary school students were reportedly sickened at a new school campus in eastern China's Jiangsu Province. The school had been built near a polluted lot where chemical factories once stood.

Complementing the education ministry's decision, the Ministry of Environment announced June 22 plans to work with local environmental and product quality authorities to launch inspections of school running tracks across the country. Any school and materials manufacturer caught breaking the law will be punished, the ministry said.

And the Beijing Municipal Government's Commission of Education said on June 13 that it has ordered a halt to all running track installation projects in the city pending a new set of quality standards that are expected to be issued soon. Similarly, the Shanghai Government Commission of Education has taken steps designed to improve school running track quality controls.

Like synthetic running tracks around the world, Chinese school tracks are often made with recycled materials such as shredded tires. The safe re-use of waste products is good for the environment, said Qu Ruijing, chairman of the China Association of the Recyclables Economy in Beijing, a government-backed group that promotes recycling.

Manufacturing standards for running track materials were imposed by the Standardization Administration of China in 2005. These standards cover areas such as amount of certain chemical ingredients.

But manufacturers are not required to follow these standards, said Jiang Yeyun, a former director of the Beijing-based China Tire Retreading, Repairing and Recycling Association. And the standards say nothing about many kinds of toxic chemicals, said a track materials manufacturing company source who asked not to be named. "Products meeting the national standards may still be toxic," said the source.

But Yin Haibo, head of a track construction company in Shanghai, told Caixin that under the current national standards, manufacturers are not advised to run tests to detect 18 types of Benzene-based chemicals in track surfacing materials that might be the source of the complaints.

Jiang said the lack of mandatory manufacturing standards "is the root cause for the running track scandals that often pop up."

Yue Fenpeng, the consumer goods testing director at the Chinese Academy of Inspection and Quarantine, said about 20 percent of the 200 running track samples tested by his agency every year fail to meet the government's safety standards for excessive level of hazardous chemicals.

Moreover, last year the government stopped requiring that track materials manufacturers and sports facilities constructors be licensed by the Ministry of Housing and Urban-Rural Development.

Some experts said the lifting of licensing rules may have an impact on the quality of tracks installed over the past year. Some unlicensed companies have used dangerous industrial wastes to make tracks installed by the nation's schools, state broadcaster China Central Television (CCTV) reported.

For example, the report said, old tires and coated cables were used by unlicensed track material manufacturers in Baoding, a city near Beijing in Hebei Province. Qu said there are "many unlicensed manufacturers" that have been supplying the nation's schools.

About a dozen track materials manufacturing companies in China have won a quality stamp of approval from the International Association of Athletics Federation, according to the state-run Xinhua News Agency. But thousands of others lack quality guarantees, the report said.

Synthetic running track demand has been rising since the nation's sports market started expanding rapidly about 16 years ago, Xinhua reported.

Amid this expansion, some small companies that manufacture track materials decided to cut costs by using toxic materials, said Shi Jianhua, a member of the China Association of Environmental Protection Industry.

The issue boiled over when parents protested outside the No. 2 Experimental School's Baiyunlu campus in Xicheng to demand that school officials rip up the track they said was dangerous. Among the protesters were parents who had kept their children home on grounds that the running track endangered their health. A fourth-grade student told Caixin that only 17 of the more than 100 in that grade continued going to school during the protest period.

Dozens of parents rallied outside Baiyunlu on several occasions between late May and early June.

Concerned parents include Qi Lin, who told Caixin that in the past she commonly smelled "the running track's odor" while waiting to pick her daughter up after classes at Baiyunlu. She worried her daughter's health was being affected.

Later, Qi said her suspicions seemed to be confirmed when "the mother of another child at the school said that, recently, some students had had nose bleeds." She then warned other parents.

Wang Shan told Caixin his son, a third-grader at Baiyunlu, had also suffered from nose bleeds and foot fungus in recent months.

Initially, Xicheng education authorities said that the parents' fears were unfounded. They shared a report June 12 issued by the Shanghai-based National Center for Quality Supervision and Building Engineering Materials Testing that said, based on a June 5 test, the Baiyunlu campus met all standards for toxic chemical levels emanating from the walls, furniture and other materials including the running track with the exception of the walls and desks in a music classroom. The music room was found to have high levels of the toxic chemical formaldehyde.

School officials got support that same day from Zhao Gang, deputy director of the Xicheng District's public health authority, who told reporters that as of June 10 his office had processed health reports for 216 students from the Baiyunlu school and found none had been poisoned by means of toxic chemical exposure.

But officials changed their tune five days later after an independent testing lab hired by protesting parents, found high levels of two carcinogens – polycyclic aromatic hydrocarbons and short-chain chlorinated paraffin – in the Baiyunlu running track. The lab, Shenzhen EMTEK Co., said it had conducted the tests based on recently issued safety standards for sports facilities adopted by the Shenzhen Commission of Education in March.

On June 17, school administrators hired workers to tear up the Baiyunlu running track.

Since the Baiyunlu incident came to light, parents whose children attend at least three other primary schools in Beijing have demanded administrators remove running tracks.

One target of complaint was Shangdi Experimental Primary School, in Beijing's Haidian District, where nervous parents had doctors check their children to see whether they had been affected by exposure to chemicals in the running track.

Shangdi school officials balked at the suspicions, saying their running track was not toxic. A teacher noted that dry weather and anxiety about school exams "in early summer can cause students to suffer from more nose bleeds and other physical problems."

A pediatrics department nurse at the 307th Hospital of the People's Liberation Army in Beijing said that more than 100 children a day had been tested for poisoning between late May and mid-June in connection with the running track scare. These children attended several schools. But not a single case of poisoning was detected, the nurse said.