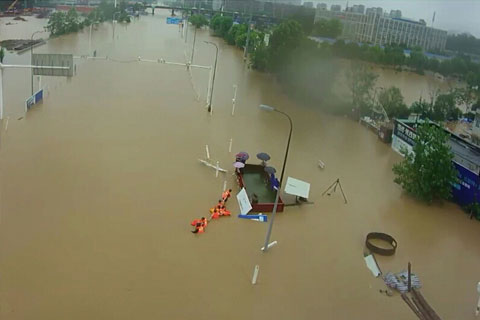 (Beijing) - The recent devastating floods along the Yangze River in southern China was not proof that the "sponge city" concept promoted by authorities as a means of disaster control has failed, an urban planning expert said.

The comment comes amid public criticism of the idea on social media in the aftermath of a disaster that has killed 160 and affected 29 million as of July 7, according to data from the Ministry of Civil Affairs.

Designing urban spaces to harvest rainwater was never meant to tackle flooding caused by extreme weather as we have witnessed this year, said Li Dihua, an associate professor from Peking University's College of Architecture and Landscape Architecture. Instead, it aims to create cities that can better manage and utilize water resources, he said.

In recent years, China has been among the most eager countries in the world to build "sponge cities" that can capture and reuse rainwater, as it wrestles with water scarcity caused by rapid urbanization and poor water management. About half of China's 657 cities are considered water scarce or severely water scarce by UN standards, according to a 2015 report by the international organization.

Features in sponge cities such as large green areas, rooftop gardens and permeable roads and pavements lets the soil soak storm water without channeling it into gutters or rivers, and allows this water to be reused to irrigate urban farms or even in homes.

The central government started promoting the idea in 2013. It earmarked 86.5 billion yuan in 2015 for a three-year pilot program to build urban sponge facilities in 16 cities including Wuhan, the capital of the central province of Hubei and one of the most flood-prone cities in the country.

Eighty percent of urban areas in China will have to meet standards for a sponge city by 2030, a government document released in October last year said.

Wuhan had over 560 millimeters of rainfall from June 30 to July 6, which is equal to almost one third of the city's average annual precipitation, meteorologists said.

Much of the city was inundated for the past week and electricity and communication links to some areas were cut off.

There was a heated online debate, mainly on popular social media and micro blog sites like Weibo, where many questioned the effectiveness of spending millions to build sponge cities to mitigate floods. Some even called for a return to old measures of flood control including building more dams and fortifying existing ones.

Such proposals, if implemented, will merely waste public money and cause further damage to already fragile ecosystems, said Li.

Most areas submerged during the recent disaster in Wuhan and many other regions were former wetlands or places where there used to be a lake. These natural flood barriers have disappeared due to government-sanctioned reclamation activities.

"These cities would not have been so vulnerable to flood damage if urban planners hadn't filled lakes and wetlands for property development," Li said.

The latest bout of flooding should serve as a wake-up call for urban designers to broaden the concept of a sponge city to include efforts to revive wetlands and rivers, which can boost a city's flood control capacity, he said.