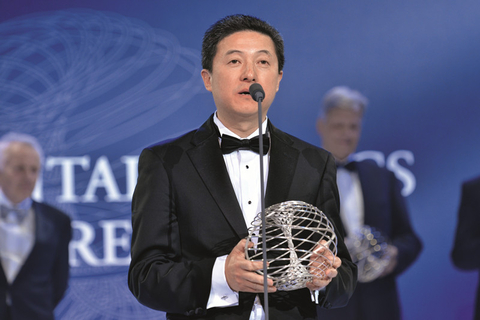 (Beijing) – Stanford University physics professor Zhang Shoucheng was gifted and determined from a young age. Born in 1963 in Shanghai on the cusp of the Cultural Revolution, a decade of political turmoil when universities were closed and lessons in schools were disrupted, Zhang taught himself science and mathematics from books he could find. When the chaos subsided and the university entrance exam resumed in 1977, he seized this opportunity and took the exam a year later. Zhang was 15 years old and had only completed junior high school when he qualified to enter Fudan University in Shanghai, one of the top schools in the country.

After a year at Fudan, Zhang won a government scholarship to study at the Free University in Berlin and then went on to get doctoral degree at the State University of New York at Stonybrook. Zhang joined the faculty at Stanford University, California in 1993 to teach physics after a stint at IBM's Almaden Research Center in San Jose.

The scientist now wears many hats, as a researcher, entrepreneur and venture capitalist. "Human knowledge is like a tree and as civilization goes forward its branches grow in all directions, but the distances between branches also widen, making it difficult to cultivate a form of cross-disciplinary thinking instead of being limited to one silo of expertise," says Zhang, explaining his motivation to cross-over from the research lab to the world of business.

As a physicist, Zhang is known for his studies on condensed matter and his pioneering work that helped discover a new class of materials, which can be used to design the next wave of computer chips. He recently led a team of researchers to design a tin alloy that has superconductor-like properties at room temperature. The discovery was named "stanene" combining the Latin name for tin – stannum – with the suffix used in grapheme, Zhang's team said in a 2015 research paper published on the scientific journal Nature. It is part of a new class of materials known as topological insulators that Zhang has experimented with for several years. When this material is organized into a wafer-thin arrangement with the thickness of just one atom inside a semiconductor, it has the potential to increase the speed and efficiency of computer chips, while lowering the energy consumed by them, the paper said.

Zhang along with two other scientists, Charles Kane and Eugene Mele from the University of Pennsylvania, won the 2015 Benjamin Franklin Medal in Physics, one of the oldest and most prestigious science awards in the United States for their "groundbreaking theoretical contributions leading to the discovery of a new class of materials," according to the award citation. This adds to his long list of accolades including the Physics Frontiers Prize awarded by the Fundamental Physics Prize Committee in 2013, The Europhysics Prize in 2010, the Oliver E. Buckley Prize in 2012 given by the American Physical Society and the 2012 Dirac Medal and Prize, a prominent science award.

In 2014, he was named as one of the top favorites for the Nobel Prize in Physics by Thomson Reuters news services.

Zhang has now moved beyond decoding physics theories and become a successful venture capitalist in Silicon Valley, home to many of the world's largest high-tech corporations and thousands of start-ups in the San Francisco Bay Area. He is among the earliest investors in VMware Inc., a cloud and virtualization software and services company, founded in 1998. He was also one of the earliest to grab stakes in the augmented reality company Meta Vision Systems Inc. that has also attracted investment from Hong Kong business tycoon Li Ka-shing, Tencent Holdings Ltd. and Lenovo Group, according to company documents.

Zhang said in a recent interview with Caixin that his physics expertise has guided his investment decisions. "(Physics) theories are important as they not only guide you when discovering new materials but also new investment opportunities," said Zhang.

In 2013, he set up a venture investment company, Danhua Capital, in Palo Alto, California, to invest in promising early-stage technology companies in Silicon Valley. The company invested US$ 92 million in its first batch of companies in 2014 and started raising US$ 200 million in January for a second round of funding. The company has invited Chinese Internet giants such as Alibaba Group, Baidu Inc. and Sina Corp. to invest in it.

Zhang says his venture capital firm has given seed money to over 30 start-ups in several fields such as big data analytics, the mobile Internet, virtual reality, augmented reality, Fintech and bioinformatics. About half of them have proceeded to a second round of funding with their individual valuations growing by about 20 times compared to the amount of capital injected at first, said Zhang.

Danhua is now preparing to create a yuan-dominated fund to invest in high-tech start-ups in China. Venture capitalists in China are shifting their focus from traditional industries to technology businesses because there is plenty room for innovation in the domestic market, Zhang said.

Danhua is also trying to link start-ups in Silicon Valley and at Stanford with partners in China who can help expand their businesses, said Zhang.

Zhang predicts that virtual reality and artificial intelligence technologies would become the next hot areas for investment. "Many listed Chinese firms are looking for virtual reality technology assets and have shown an interest in our projects," said Zhang, adding Danhua was an early mover into this field, before it heated up last year.

Zhang suggests Chinese firms should carefully study the business models and the culture of tech start-ups before acquiring them to make sure they can be easily integrated into their businesses. "It is better to start cooperating on a project before a business takeover," he said.

A knack for investment served as a double-edge sword for a scientist. It could hurt research, especially those probing into emerging technologies, said Zhang. "Take experiments into topological insulators as an example…in academic circles, all research information, both successes and failures, can be shared. But when you form a business, some information must be withheld because they are commercial secrets," he said.

Zhang also warned against the dangers of venture capitalists trying to fund early-stage research. "As a scientist, I will never raise funds (from investors) for topological insulators research. But there are venture capitalists chasing these kinds of projects. (But the practice of pouring money too early into fledgling technologies) doesn't benefit investors or scientific development," he said.

According to Zhang, innovation requires a free atmosphere and good coordination between academic circles and businesses backed by an effective market mechanism.