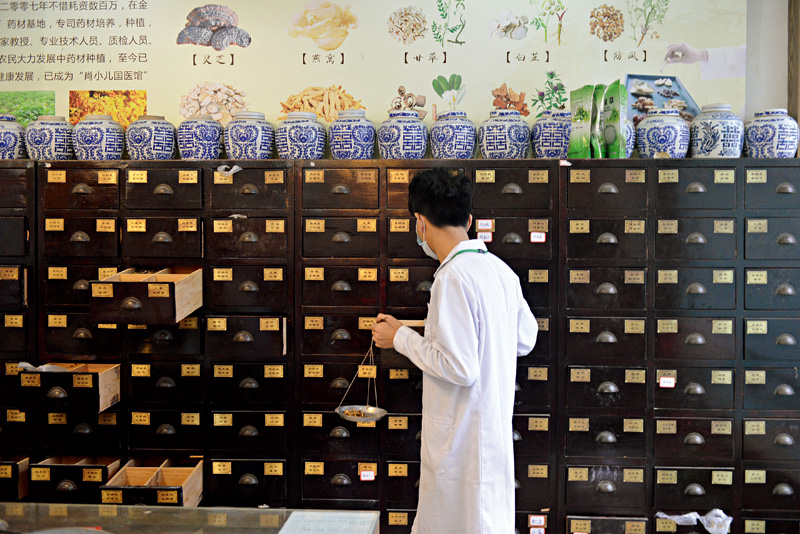 (Shanghai) - Amid rising public concerns about side-effects of traditional Chinese medicines, or TCM, following the death of a young woman who died of liver failure last year, a government-backed medical association has started compiling a database of substances used in traditional therapies that may cause liver damage, a researcher in to liver diseases said.

The Chinese Society of Infectious Disease under the government-affiliated Chinese Medical Association is creating the national database listing herbal plants and medicines which can harm a patient's liver, according to Zhu Qingjing, a deputy director of Wuhan Liver Disease Research Institute in the central province of Hubei.

Zhu says the database, which may go live early next year, also tells doctors and patients how to minimize potential risks to the liver from taking TCM drugs by guiding them on the proper dosage according to different liver conditions.

The Chinese have long used tonics, pills, pastes and powders made of traditional herbs, animal products and other substances as dietary supplements to boost vitality and promote longevity. They are now being sold as sophisticated therapies to fight diseases, and many are buying them thinking that these treatments are natural, safer alternatives to western drugs with side effects.

However, a lack of quality control standards for the industry including stringent labeling requirements or clinical trials before introducing drugs to the market has led to a rise in complaints over liver damage or harm to other organs caused by TCM drugs, according to several industry experts.

The latest public scare was caused by the death of a 32-year-old woman in Shanghai, who died of liver failure in January 2015, two months after consuming a syrup made of Fallopia multiflora, or Chinese knotweed, a flowering plant widely used in anti-aging remedies.

In the case filed early last year, the family argued that the patient's liver was damaged after consuming the syrup made from the stem of the Chinese knotweed plant, a species of the buckwheat family, Liu said. Several doctors who treated the woman after she fell ill had diagnosed that "her liver was damaged by a drug," Liu said, and the TCM syrup was the only medicine she was taking at the time. The lawyer did not disclose the amount of compensation demanded by the family.

However, the court ruled against the family saying the stem of the plant is listed as a type of herbal drug and only its root was identified to have toxins in the 2010 edition of Pharmacopoeia of the People's Republic of compiled by the Ministry of Public Health, according to Liu.

But the lawyer argued that several studies published in China showed that both the stem and root of the Chinese knotweed plant had the same toxic effect. An appeal is still pending.

This case highlights the hidden dangers of TCM. In October 2013, the China Food and Drug Administration (CFDA) first raised the red flag on health risks associated with Chinese knotweed. The drug watchdog warned people with liver problems to stay away from five over-the-counter medications that use extracts from the plant as an active ingredient and reclassified these medicines as prescription drugs.

In a public briefing over the side effects of TCM drugs in October 2014, the CFDA warned doctors and patients, particularly those with liver problems, to be cautious when prescribing or using drugs made of Chinese knotweed. Pharmaceutical companies and producers of dietary supplements should include a clear warning on their labels when extracts from this plant are used, CFDA said.

Complaints of side-effects, particularly liver damage, linked to these herbal drugs have been on the rise in recent years. The National Center for Adverse Drug Reaction Monitoring said it has received nearly 10,000 reports from patients who used drugs made of Chinese knotweed and a large portion of patients suffered from liver damage.

Xiao Xiaohe, director of a TCM research institute under the well-known 302 Military Hospital in Beijing told Caixin that taking medicines with Chinese knotweed had caused most cases of liver damage linked to traditional therapies documented by the army hospital.

For decades, China has looked for ways to modernize the practice of TCM and these efforts have gained momentum in recent years after the government started promoting traditional medicines as a cheaper alternative to western drugs to put a lid on rising medical bills.

The State Council in February released a plan to develop traditional medicines over the next 15 years. The council identified challenges facing TCM including a decline in the quality of herbal plants and the lack of expertise among TCM doctors and it promised to allocate more resources integrate TCM into the mainstream health system.

Chinese scientist Tu Youyou's Nobel Prize win in October last year for her discovery of artemisinin as an effective anti-malarial drug has been interpreted as a global recognition of the value of TCM therapies.

More traditional cures are now delivered via techniques used in western pharmacology in the form of pills, capsules and even intravenous drips. A long list of Chinese knotweed-infused tablets, capsules and even syrups for children are available in the market to treat a variety of illnesses from anemia to kidney failure.

Unlike other fields of science, TCM has been passed on from one generation to another largely along family trees, says Yu Qiang, a research fellow who specializes in organic drug research at the Chinese Academy of Sciences' Shanghai Institute of Materia Medica.

The quality of some herbal plants may vary greatly over time from what they used to be in terms of the amount of active chemical compounds they contains and if we still follow the same prescription we inherited from our ancestors it may not have the same efficacy, said Yu.

"The biggest challenge is the lack of research results or evidence from patient trials to prove the safety of traditional drugs," he said.

However, these drugs reached beyond the national border. The Food and Drug Administration in the United States has approved clinic trials for several TCM products including an anti-flu capsule in December. But none of the tests so far are conclusive meaning questions remain on their efficacy and safety, according to industry experts.

As China's demand for alternative therapies, especially herbal medicines, grow, drug companies have started sourcing herbs cultivated in "medicine farms" using pesticides and fertilizer. This has made it difficult to control the quality and guarantee the safety of TCM products, said Wang Guiyang, head of State Administration of Traditional Chinese Medicine which regulates the TCM industry in China.

"TCM could be ruined by (substandard) herbal plants," Wang warned during a national symposium on herbal plants on July 3.